The old azulejo on the wall, blanched by time and weather-beaten by endless storms, reads:

The mythical Douro – a place to call home? John O'Connor, the reputed Anglo-Irish artist, spent several years working on a book of paintings that he and Maria do Carmo Paço d'Arcos who selected the texts, called “Portrait of the Douro”.

As John explains in his Introduction : “It may be thought curious to title what is essentially a collection of landscapes a Portrait but it is our feeling (...) – and that of the famous authors, Portuguese, English or South African whose texts complement so well the watercolours – that the Douro is not simply a river - nor just the name of a demarcated wine region - but a living entity formed by the blood and toil of countless men and women who sacrificed their lives to the mystery of the vine”. 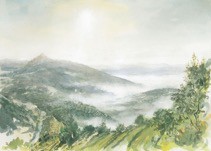 And one of these men – less anonymous than the armies of men and women who worked so hard to tame the rocky hillsides, on the innumerable Quintas of the region – was Baron James Forrester.

Forrester was born in Hull on 27 May 1809, of Scottish parentage. Once in Portugal, he worked on a comprehensive survey of the Douro, making the first map, with a view to the improvement of its navigation, the merit of which was universally acknowledged. In 1844 Forrester published a pamphlet on the wine trade, entitled ‘A Word or two on Port Wine,’ receiving letters of thanks from 102 parishes of the Upper Douro. A prize of fifty Guineas - offered by Mr. Benjamin Oliveira, MP, for the best essay on Portugal and its commercial capabilities - was awarded in 1853 to Forrester for an admirable treatise that still holds true today.

James Forrester was named Baron de Forrester for life by Ferdinand II of Portugal in 1855.

Ironically, on 12 May 1861, this man drowned in his beloved Douro river, his body never to be found. Ships in Lisbon and Oporto harbours lowered their colours half-mast on receipt of the news, and public buildings showed similar signs of mourning.

In the wine country, to this day, Baron Forrester is still remembered as the “Protector of the Douro”.

Another famous name associated with the Douro region is that of Wellington. The titles of Duke of Wellington and Marquess of Douro were bestowed upon Arthur Wellesley in 1814 after he returned home a hero, following Napoleon's abdication. Two years prior to his return to England, during the Peninsular Wars, in 1812, Wellington's engineers, by patient blasting and dredging of the Douro River, made it more navigable for Wellington's guns and food supply lines. In later years, more importantly still, the “tamed” Douro proved more useful for the rabelos – the flat-bottomed boats that had to negotiate the terrible rapids and dangers of the river and the other crafts used in the wine-trade – the work of these English engineers having served to open up the remotest parts and quintas of the Douro Valley which were made into fertile vineyards by D. Antónia Ferreira.

The 24,600 ha. of the Douro region were put on the UNESCO Heritage list in 2001. Each and everyone of John's watercolours and the selected poems of the likes of Miguel Torga, Teixeira de Pascoes, Alves Redol, Jaime Cortesão or Rose Macaulay, take us further and further into the lives of the Duriense people and their homeland held sacred. We are left mesmerised by the beauty of the landscapes - as were no doubt Wellington and Forrester when not engrossed in their daily tasks – captivated by the watercolours and the drawings that John O'Connor brings so vividly alive in his portrait of a beloved land. 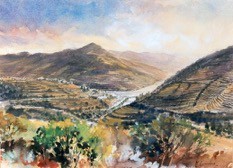