The Society has had a branch in Porto for many years but, unfortunately, Covid restrictions meant that no meetings could be held during the years 2020 and 2021. So it is with great pleasure that we can record that the branch met again on the evening of 21 April at the Oporto Cricket and Lawn Tennis Club (OCLTC), its habitual meeting venue.

Alan Dawber has agreed to head up the branch for the next two years, assisted in administration by Janice Bain, who will be particularly welcome as the contact with the OCLTC.

Over 30 members and friends of the Society attended the inaugural meeting, last-minute adverse weather and traffic impediments notwithstanding, and ten stayed on for dinner.  Edward Godfrey and Mark Crathorne, the chairman and vice-chairman of the Society, came up from Lisbon and the evening’s proceedings commenced with a drinks reception, Edward’s words of thanks and the presentation of a gift to Terry Weineck, who was retiring as the branch representative after some years in the role. Edward then thanked Alan and Janice for agreeing to carry on the Society’s representation in the north of Portugal.

Alan then began his talk on the “The Life and Times of Rei Afonso VI”, whose effective reign was from 1662 to 1667. Afonso was the second son of Rei João IV, whose reign, 1640 to 1656, marked the beginning of the Bragança dynasty and commencement of the years known as the Portuguese “Restauraçâo” after 60 years of Spanish Habsburg rule. Afonso succeeded to the throne in 1656, having suffered a childhood illness, which left him with severe mental and physical incapacities. Consequently, the early years of his reign were strongly influenced by his mother and regent, Luisa de Gusmão. But, in 1662, his prime minister, the Count of Castelo Melhor, initiated a palace coup and took over the running of the country, installing the king as the ‘effective ruler’.

Alan explained the connections between Portugal and England at this time, the relationship between Afonso, his sister Catherine of Braganza and her husband, King Charles II of England. Afonso’s younger brother, Pedro, became Regent in 1667 and Afonso began a five-year period of exile in the Azores (Terceira), followed by nine years of imprisonment in the Royal Palace of Sintra until his death in 1683. Alan showed why, despite all this, Afonso is popularly referred to as “the Victorious” as a result of three crushing victories over Spain during the five years of his effective rule, which led to Spain finally accepting the complete sovereignty and independence of Portugal.

Alan’s talk was very well received and the Society is grateful to him for restarting its activities in Porto in such a positive way. Thanks are also due to Nuno Machado, Alan’s former student, who operated the projector; Maria de Fátima, Alan’s wife, who dealt with the financial administration in the absence of Janice Bain who was suffering from Covid; and, of course, to the management and catering staff of the OCLTC for their hospitality and an excellent dinner. Though unfortunately but necessarily absent, Janice had done excellent liaison and planning work beforehand with the OCLTC staff to make this successful evening possible.

The Council of the BHSP looks forward to ongoing support to Alan and Janice from the Society’s members and friends in the Porto area. Alan has strong connections with people in music, literature and the arts and we are sure the Society can benefit from a historical perspective through these connections. 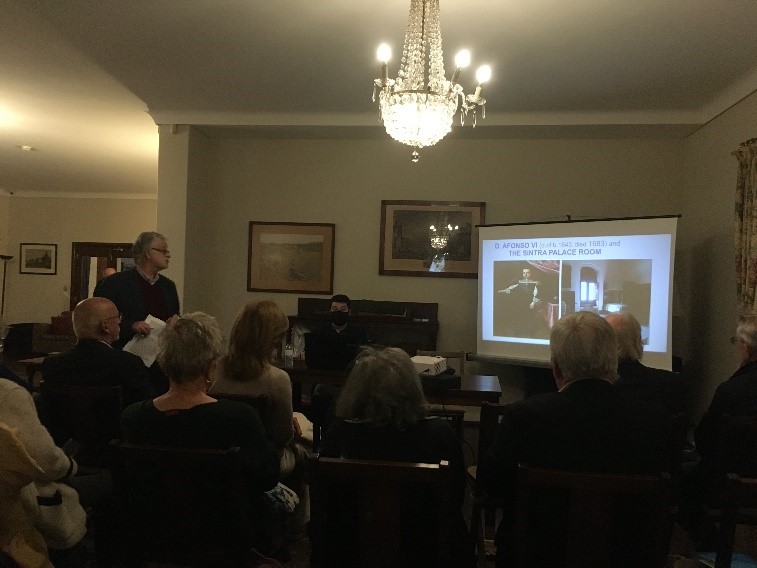 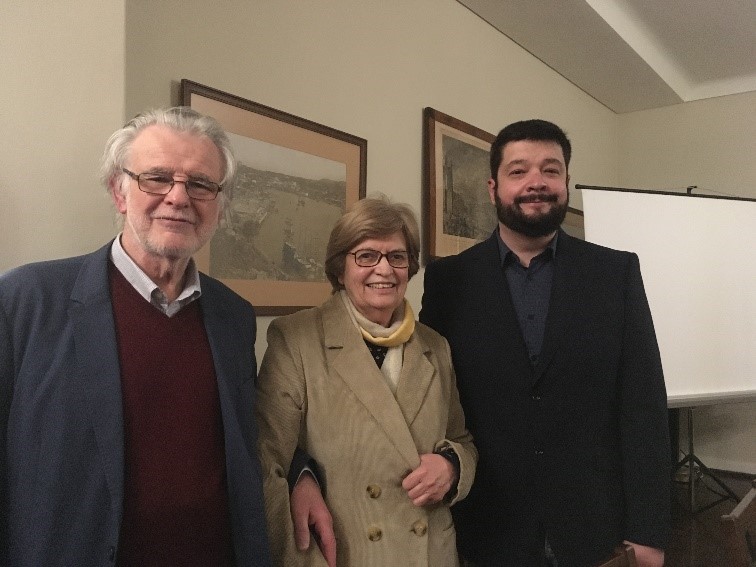 The meeting left participants looking forward to the next event, to be held Thursday, 2nd June, at the OCLTC.  Jonathan Lewis, a lecturer in English at the Faculdade de Letras, Universidade do Porto will talk on ‘The Early Adventures of English: the History of the English Language up to the Middle Ages’.