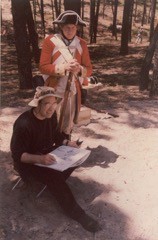 John O’Connor with a redcoat

That's what he said: “Maybe I am the last Renaissance man”. And he laughs.

John O'Connor was born in London into a family well versed in the Arts. When taken to meet the Headmaster of his new prep school, a voice thundered: “So you are the O'Connor boy. Well, I am O'Neill”. Little did John realise then how strong a role his Irish heritage was going to play in his later years. After leaving school, he threw himself into the London Art Scene – Abstract Expressionism imported straight from America - the likes of de Kooning, Pollock, Gorki were all making names for themselves then – some, big names – riding bicycles over cheap canvases, throwing paint at cheap cotton duck material.

“The Energy, says John, it was the Energy that got at you. But much – so much was just fun & games – a farce really – the ultimate joke: enjoying life to the tilt, taking any old punter for a pound or two... Selling crap for ludicrous prices – just to win a bet made late one night in Paris.

For example, the famous Parisian art dealer Daniel Kahnweiler had boasted one day ”I bet that I can make any one of these artists famous! - Sell that Assirian’s paintings for a good million!” (referring to Picasso). And he did. Modern Art – the men and women who lived & worked in Paris at the Bateau Lavoir: making Artistic statements; Recreating the World – or so they thought … Pompous young things really, rabble, braggarts, all of them”.

One morning, John was called into Sir William Menzies Coldstream's office – Slade Professor (Head of the Slade School of Art, in London) – expecting to get a slap on the wrist for his poor attendance at lectures.

“I want you to look at something, young man, said Sir William, pointing to a huge chest of drawers. Look. Don't say a word, Boy – just look”. And there, before John's very eyes, were the most beautiful drawings by art students he had ever set eyes on. Drawer upon drawer of classical drawings, etchings, watercolours, landscapes .................

The Soul – Where is the Soul?”

John O' Connor, lesson heeded, vowed henceforth to dedicate his time to the study of Nature and to the works of Old Masters.
John O'Connor had a tale to tell.

“True Art has a story to tell. It must be connected to the true meaning of Life”.

Death & the Maiden; Murder considered as a Fine Art, The Trojan Dinner – Noli me tangere – all titles given to a series of paintings to which John O'Connor is putting the final touches today and hopes to exhibit at the Gremio Literário in Lisbon, next year.

All speak of the Heart-to-Heart Bond, through Faith, that Dante, in the Divine Comedia & Chaucer in his works, depict so well.

John O'Connor, who patiently grinds his own pigments as did the old Masters of the Middle Ages and Renaissance, remembers his defining moment – his own Epiphany so many moons ago – as he looks out of his studio window across the hills towards the sea: on the studio wall – his rending of St Paul, blind, rats eating his bread on the table nearby, tells us all we need to know of John O'Connor's search for Meaning: Truth is to be sought & found within.

“Love, says the Anglo-Irishman who has lived for many years in Portugal with his Portuguese wife – Love is the Key”.

Schlegel, the German philosopher wrote: “He who has a religion of his own – an original conception of the Infinite – only he can be a true Artist. And John O'Connor, the Anglo-Irish Roman Catholic who suddenly, one day, saw the Light, smiles, his eyes turned within. And raises a glass of red wine to friends here in Sintra and to friends lost to the Art scene in London and America, in the Sixties and Seventies.

"Those were the days my friend,
We'd sing and dance forever and a day, We'd live the life we choose,
We'd fight and never lose,
For we were young and sure to have our way. La la la la…"...... So sang Mary Hopkin in 1969.