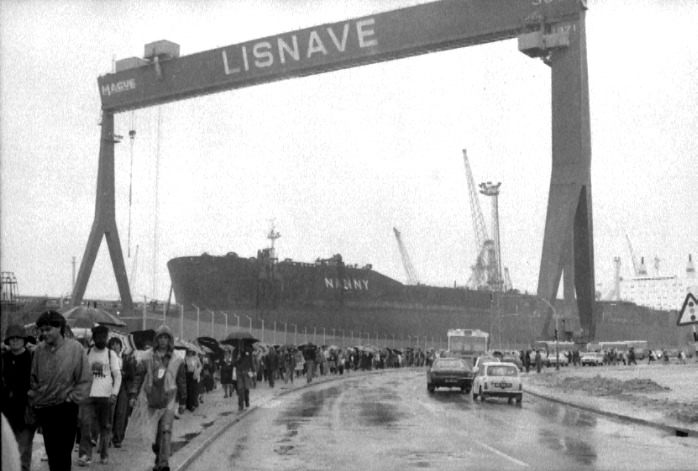 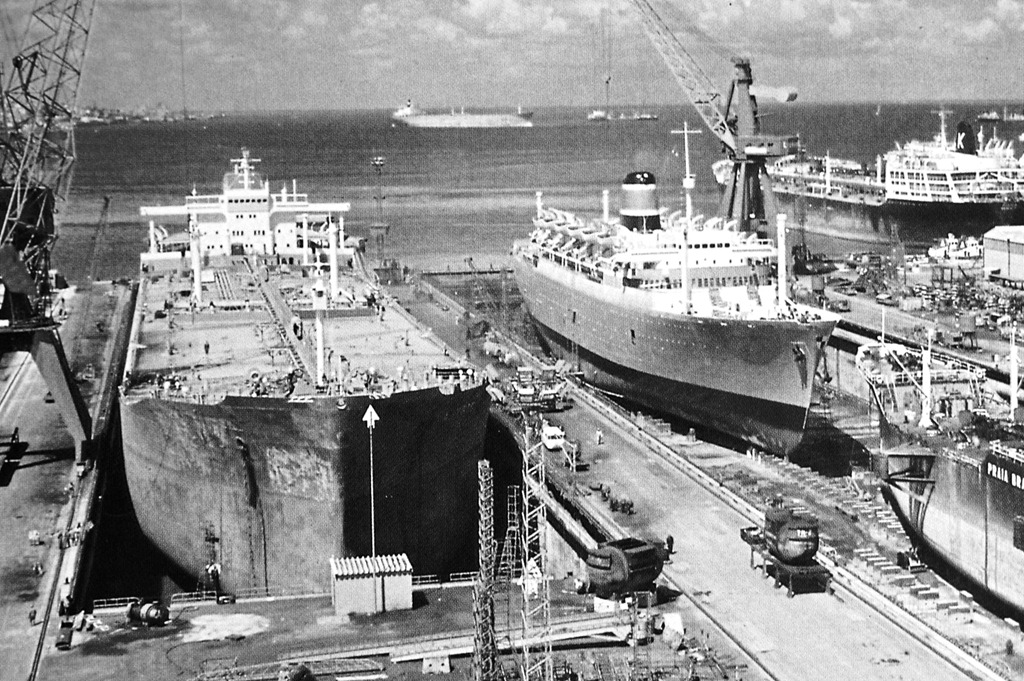 On 11 April 2022, at 09.50 on the dot, fifteen members met up with Edward Godfrey, Chairman of the BHSP, in the cacilheiro (ferry boat) station at Cais do Sodré to set off on a day trip to the other side of the Tagus. Nobody was late - or even absent - which in itself was quite a feat because the previous night the skies had opened and rain had lashed down on the whole of the Lisbon area. The skies were still not looking very promising when the group set off and rain was still pelting down as it got off the ferry in Cacilhas and hurried under umbrellas, macs and ponchos to the first point of interest: the long-deserted shipyards of the English-owned firm H. Parry & Son. Here, the Barracuda, an old Portuguese navy submarine, and the Dom Fernando II e Glória, a wooden-hulled 50-gun sailing frigate of the Portuguese navy, are on display as museum ships in the two Parry dry-docks. The Dom Fernando II e Glória is already open to the public but not yet the submarine. On 11 April they both looked rather forlorn in the teeming rain.

As Edward started to explain the history of the area, the sun burst through the clouds, reminding us that the south bank of the river Tagus is one of the best places to contemplate the city of Lisbon, the 25 de Abril bridge and the surroundings. The group set off along a narrow picturesque cobbled path at the foot of the cliffs, on a tour of discovery that was a well-deserved reward for getting out of bed on such a damp and miserable morning. Almada (and its suburbs) is today known primarily as a commuter-town, with streets and streets of rather dismal-looking blocks of flats; a town that houses the CTAlmada theatre company, with an internationally renowned troupe and repertoire; the statue of Cristo Rei … and, yes, lots of old derelict, gutted, graffitied buildings on the waterfront, that can be seen from Lisbon, and along the Linha, almost up to Cascais.

Everybody looking across the river to Almada can also see a large red “contraption” on the shore line – some can even read the word LISNAVE in smudged white letters on the top of the superstructure. “But what is it?” many ask and even the Lisboetas are unable to give details but “that thing” is associated with the Companhia Uniao Fabril (CUF), which belonged to the one-time conglomerate of the entrepreneurial families of Alfredo da Silva and Manuel de Melos who, before the Carnation Revolution, owned more than just hospitals. In 1937, CUF took over the concession of the Rocha Ship Repair Yard on the north bank of the Tagus. In 1961 the company adopted the name - Lisnave, Estaleiros Navais de Lisboa - and expanded its activity to the south bank of the Tagus, where a new yard, the Margueira yard, was built to accommodate the largest vessels.

In the second half of the 20th century, the southern bank of the Tagus around Almada and Seixal saw a massive transformation. Originally, it was an agricultural area, which suppled Lisbon and regions further afield with produce, grown locally or brought up from the Alentejo or offloaded from trawlers. There were also cork factories, fish canning and small shipbuilding and repair yards. It then became a thriving industrial complex based on Lisnave, as Edward, our well-read guide, was to inform the group. “Lisnave, in its heyday, had the largest dry dock in the world,” echoed the distant voice of one José Mata, a shipyard-worker long since dead and buried in the local cemetery.

Visiting the Almada Naval Museum at Olho de Boi, we had the opportunity to understand the booming activity which took place on this side of the river: 45 hectares with more than 10,000 workers, great ships, haughty gantry cranes and all the necessary facilities. With four docks, the company was able to repair, at the same time, 12 to 16 large ships. The activity was continuous with people working 24 hours a day. “Lisnave was practically a city within a city, functioning 24 hours a day, 365 days a year”, Luis Milheiro recalls, with a mythical number still inscribed on the helmet that he once wore – an innovative safety feature in his time – now resting on a hook in the Almada Naval Museum. This is a fascinating place to visit, although the section devoted to former naval construction is unfortunately closed at present. By the 1980s, when orders decreased, workers had to survive on a basic salary, with some families living in shanty-like barracks, until Lisnave, on its last legs, became History by the year 2000. Edward also showed us the former premises of the Companhia Portuguesa des Pescas, specialised in the canning and fishing industry.

A quick trip up in the modern, panoramic public elevator, the Boca do Vento, to the top of the hill brought everyone back to the 21st century, to a mirador that offers the most stupendous vista of Lisbon, then on into a quaint little district in the historic centre of Almada, for a well- deserved seafood lunch. A massive Urbanization Plan for East Almada has just received final approval and European funding: land has been reclaimed from the docklands to equip the town with a modern tram network right up to the ferry boats that scoot across the Tagus day and night, to the delight of foreign visitors and potential investors. In 2009, the area once occupied by Lisnave was being sold to the world as The City of Water, with an ambitious urbanistic plan including habitation, business, retail and leisure. Unfortunately, these plans have not yet left the drawing board, but the members of the BHSP were still reminded at the end of their outing that “the Tagus created Almada; the Tagus will go on taking care of its own”.

In the afternoon we returned to the frigate Dom Fernando II e Gloria located close to the submarine NRP Barracuda, which was operational from 1968 to 2010. The D. Fernando II e Glória was the last exclusively sailing ship of the Portuguese Navy and the last "Nau" to serve on the route between Portugal and Goa. It was also the last large ship to be built at the Royal Shipyard of Daman (State of India), where it was launched in 1843 and then towed to Goa to be armed and rigged. The ship was named in honour of D. Fernando Saxe Coburgo-Gotha, husband of Queen D. Maria II of Portugal and the Queen herself, whose name was Maria da Glória.