After an interregnum caused by the Covid restrictions, 34 members of the Society enjoyed a long weekend in the depths of the Alentejo, subject to unusually hot weather. After a comfortable journey by coach on the Friday afternoon, the group installed themselves in the Beira Rio hotel in Mértola for the next two nights, where most of the rooms benefit from a fine view over the river Guadiana. An animated dinner was held at the hotel, where acquaintances were renewed and new friendships formed. Mértola was once an important trading post, being the most northern port of the River Guadiana and was a stopping and trading point for Phoenicians, Carthaginians, Romans, Suebi and Visigoths, Arabs and Christians and thus has a rich archaeological and historical heritage. 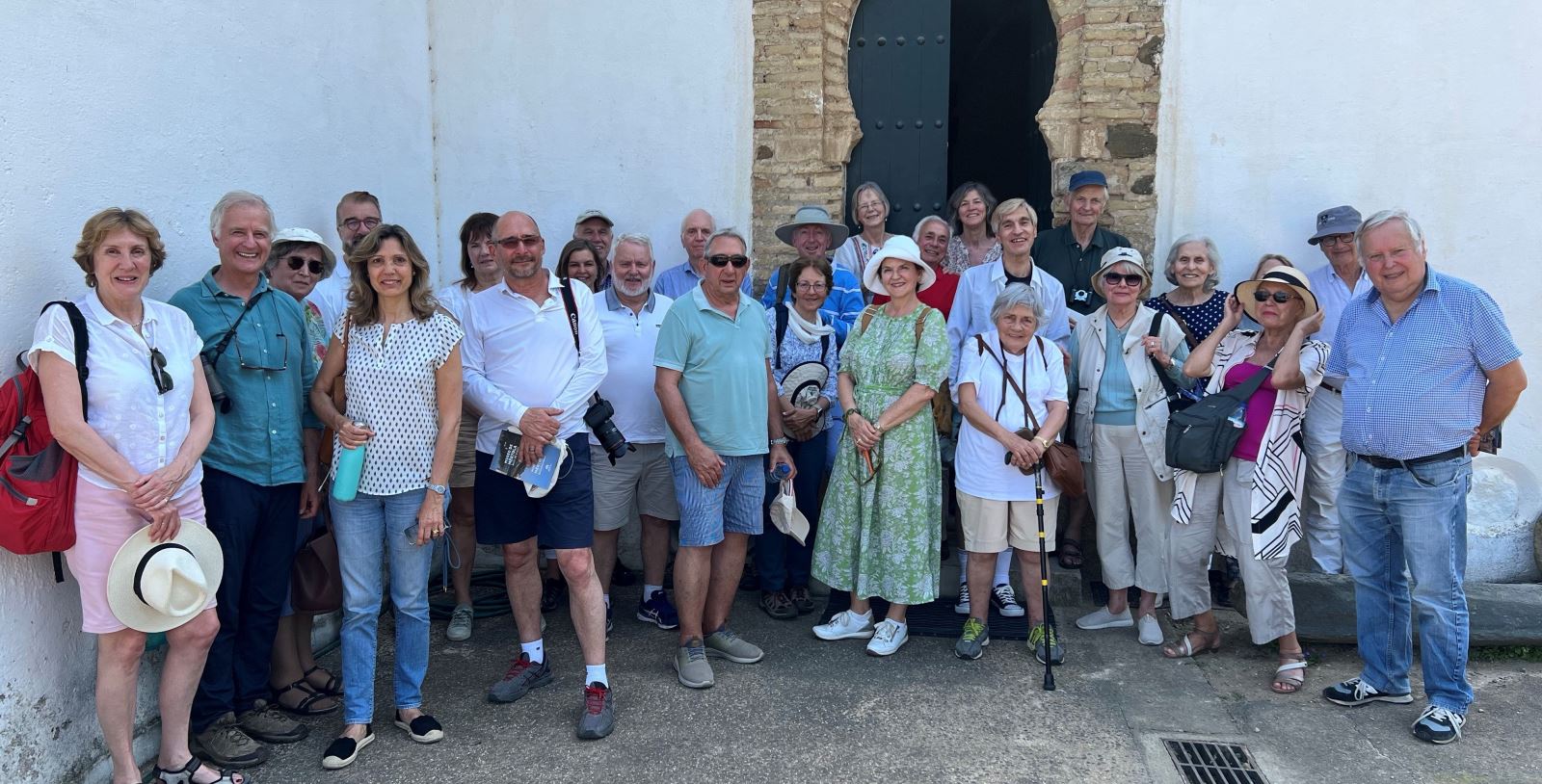 Saturday’s programme commenced with an excellent tour of the abandoned Minas de São Domingos, under the capable guidance of Peter Booker, the Chair of the Algarve History Association, who kindly came all the way to guide the visit. São Domingos lies on the Iberian Pyrite Belt, which from ancient times was sought after for the extraction of minerals and there is evidence of gold, silver and copper mines since the pre-Roman and Roman period. The modern open-cast mining operation began in 1854, when the French company Sabena leased the concession to the British company, Mason & Barry, which continued to operate the mine until 1966, with around 108 years of regular operation, extracting more than 20 million tons of ore (copper, zinc, lead, and sulphur). The Minas de São Domingos was the largest Portuguese mine until the 1930s, employing over a 1,000 workers, some of whom came from as far away as Wales and Cornwall. Bands of terraced house reminiscent of Welsh mining towns were built, as well as a railway, a port at nearby Pomarão, and the first power plant in the Alentejo. The company’s offices are now part of a small hotel and although many of the ruined industrial buildings remain as a stark reminder of the past, most of the surrounding land and slurry lakes have been decontaminated, and a fluvial beach now serves the village’s inhabitants. Less impressive is the sorry state of the small walled British Cemetery, which was vandalised in the 1970s and now only contains five intact headstones. Maybe this offers a challenge for a restoration project? 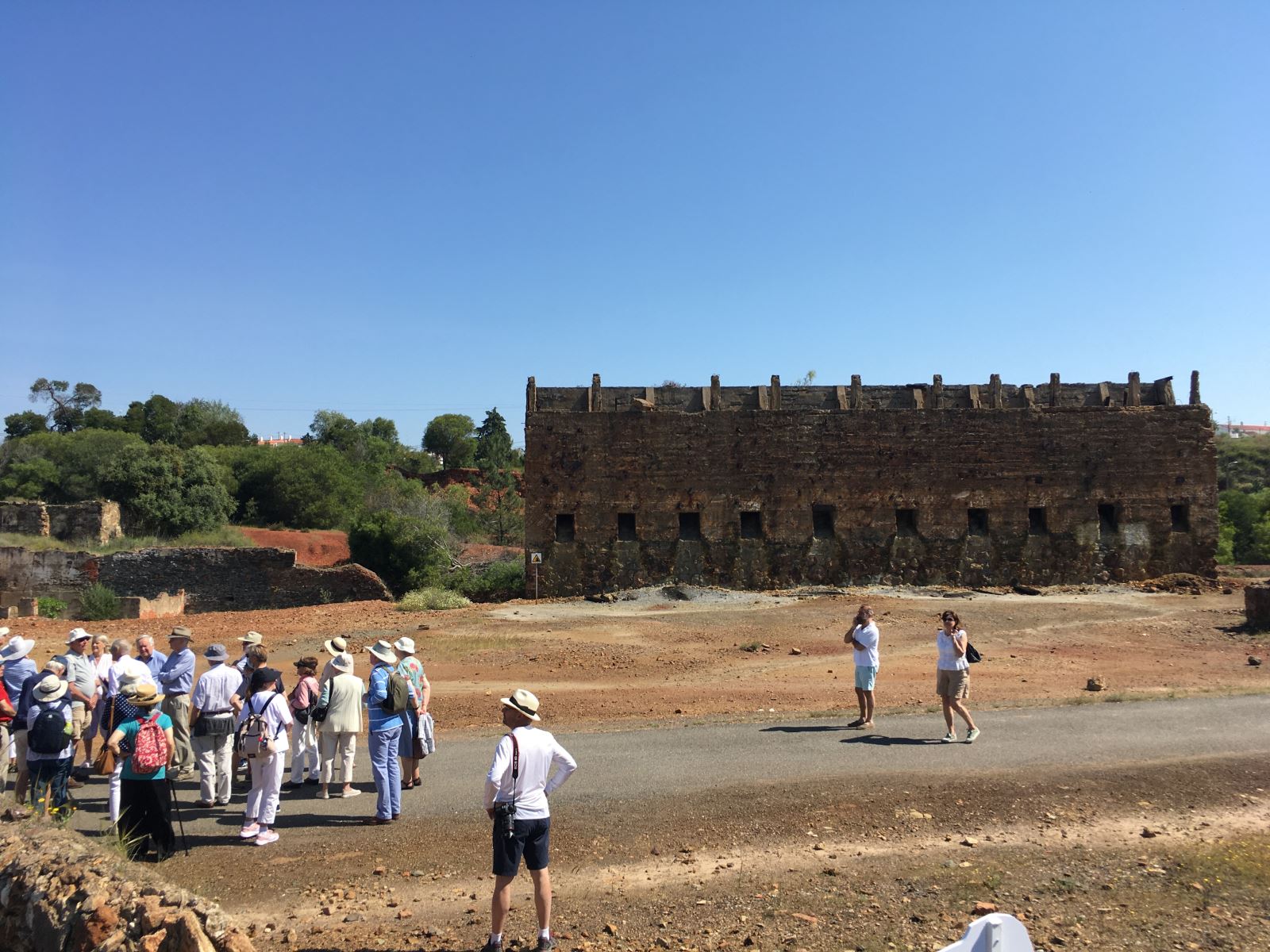 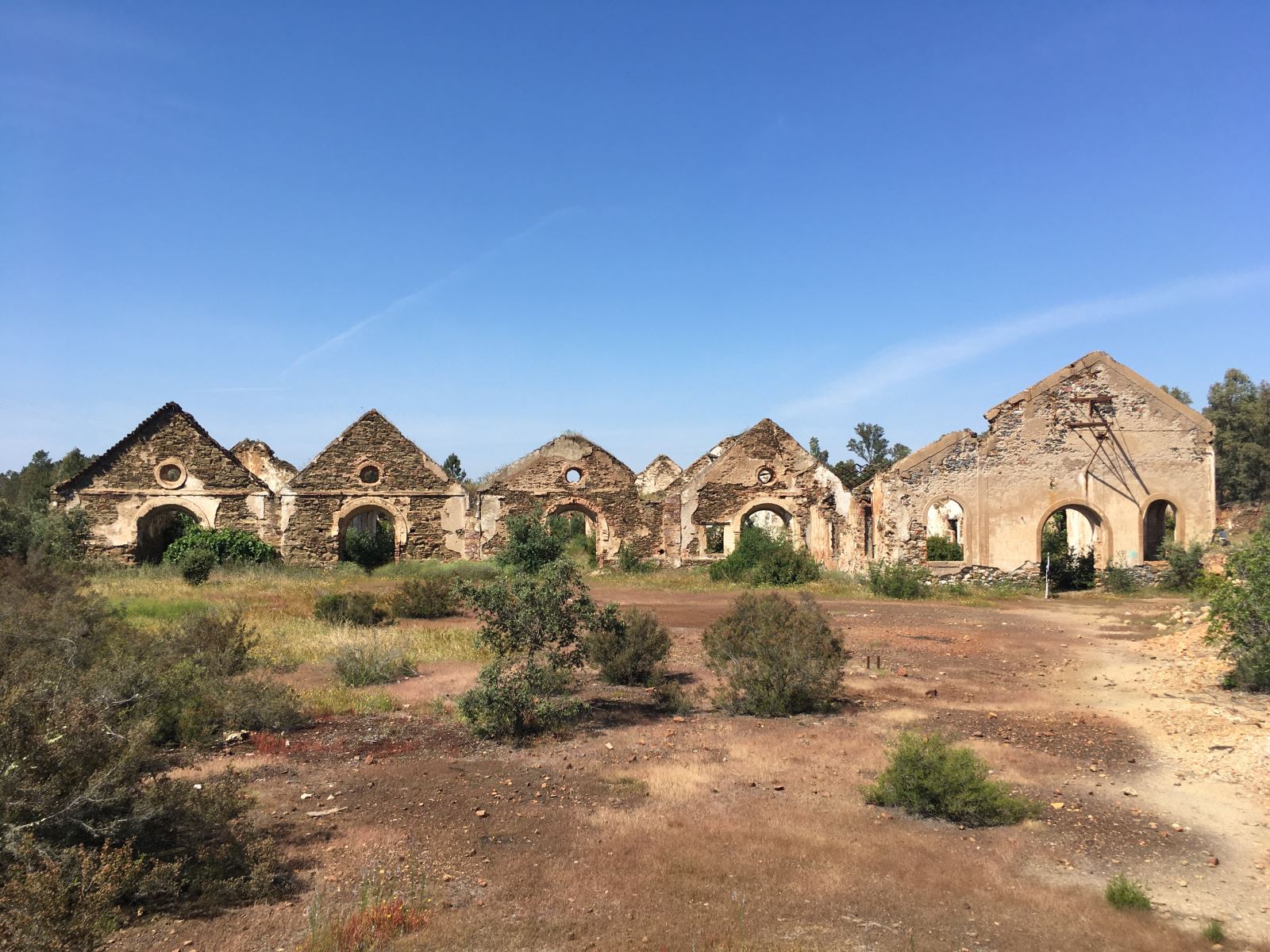 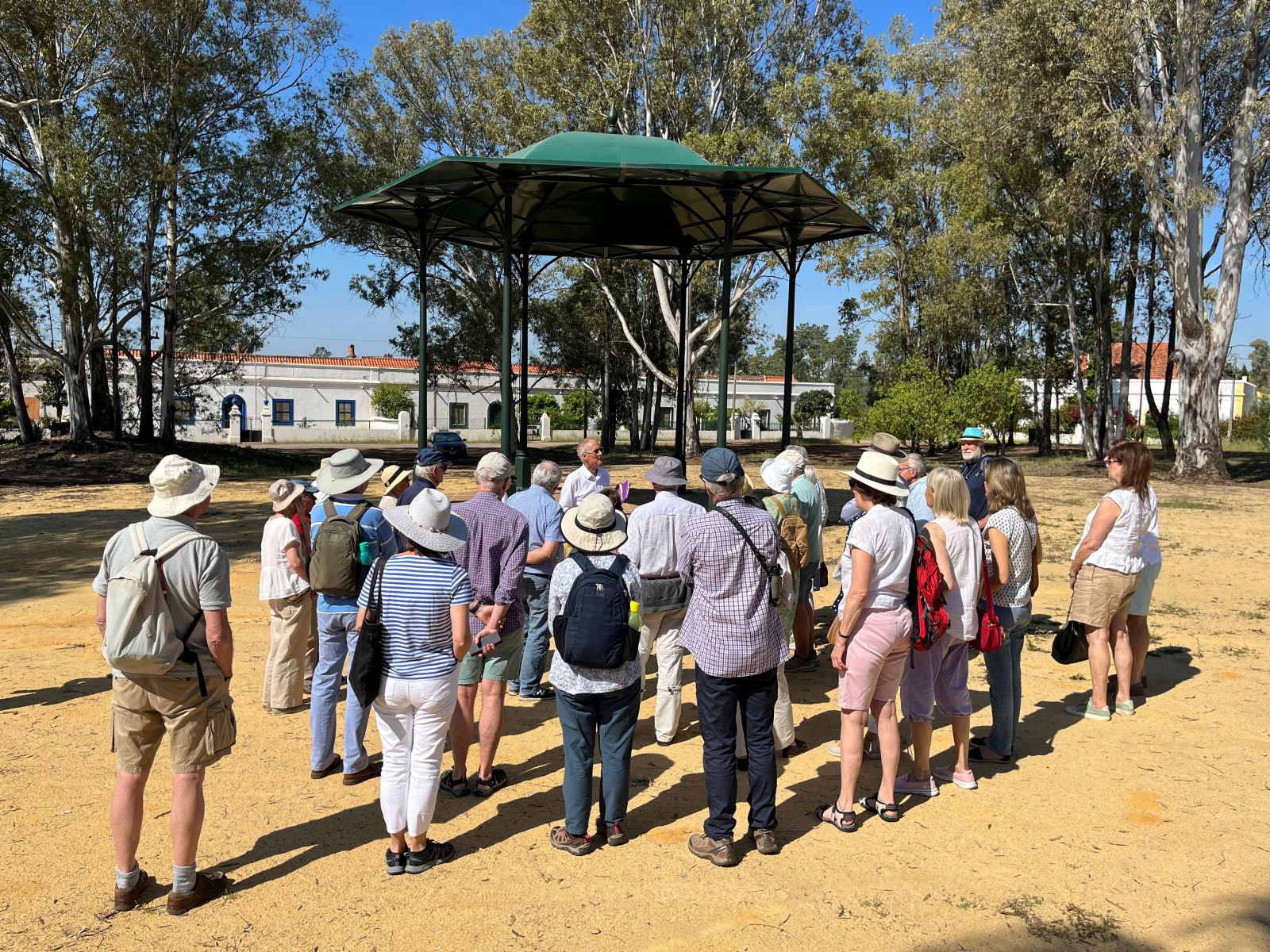 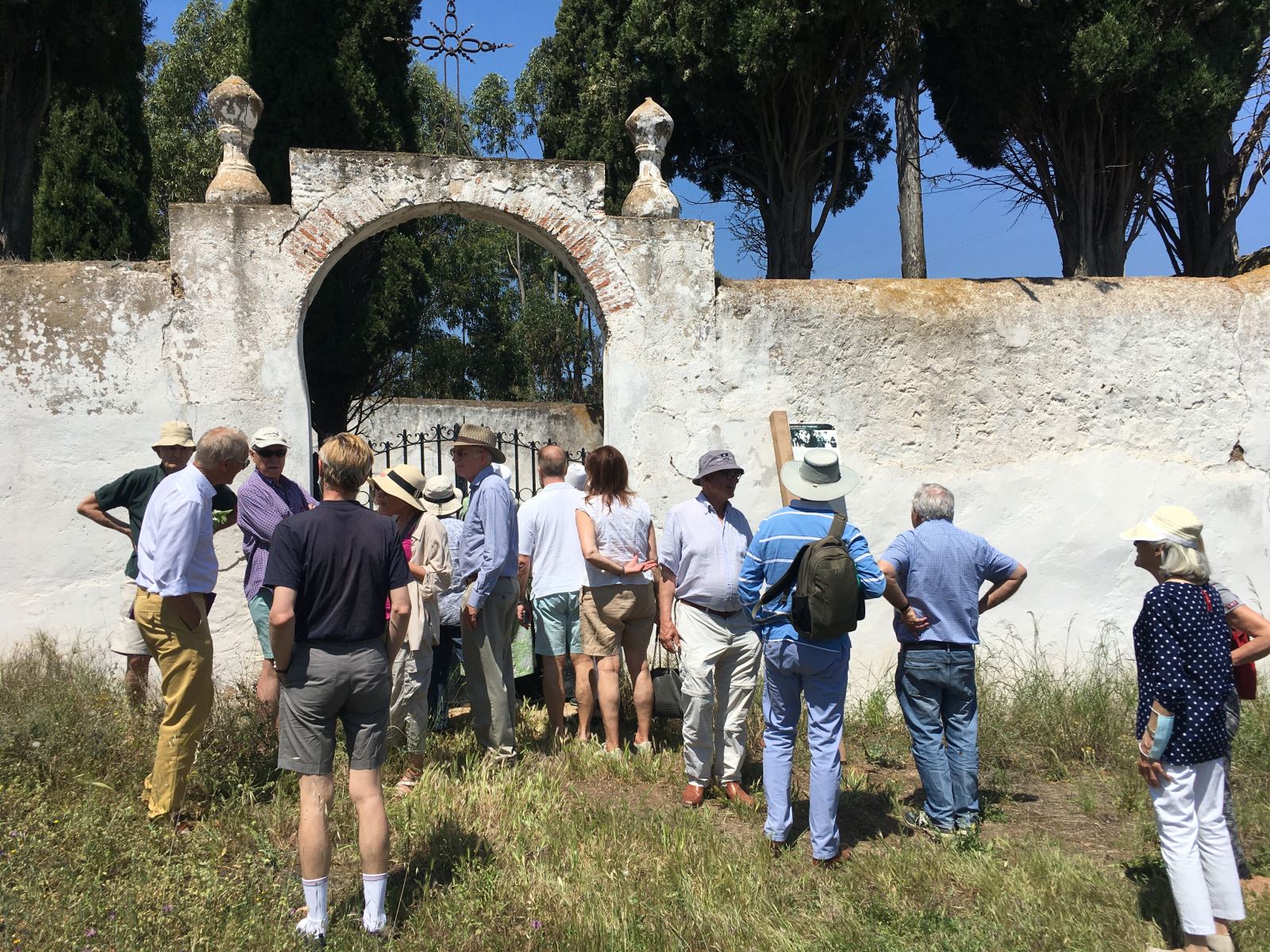 After a typical Alentejo lunch, the coach took the group back to Mértola for a visit to the Nucleos Museológicos de Mértola. The Municipality provided an excellent guide who first took the group to the 12th century church and pointed out the traces of the original Moorish mosque. The visit to the adjacent extensive archaeological ruins started in a reconstructed typical Moorish house, before the group walked through the remains of not only Moorish houses, but previous Roman ruins, including the remnants of Roman mosaics and an underground cistern, which was later used as a rubbish dump by the Moors. The guide explained that the Christian inhabitants constructed their settlement on top of the buildings of the other two civilizations and that over 700 of their graves have been found. The afternoon was capped by fascinating visits to a working weaving loom, the Moorish museum – which is full of a wide range of artefacts recovered mainly from the above-mentioned rubbish dump – and some of the group also visited the ruins of a large Roman villa situated underneath the Town Hall in the middle of Mértola. 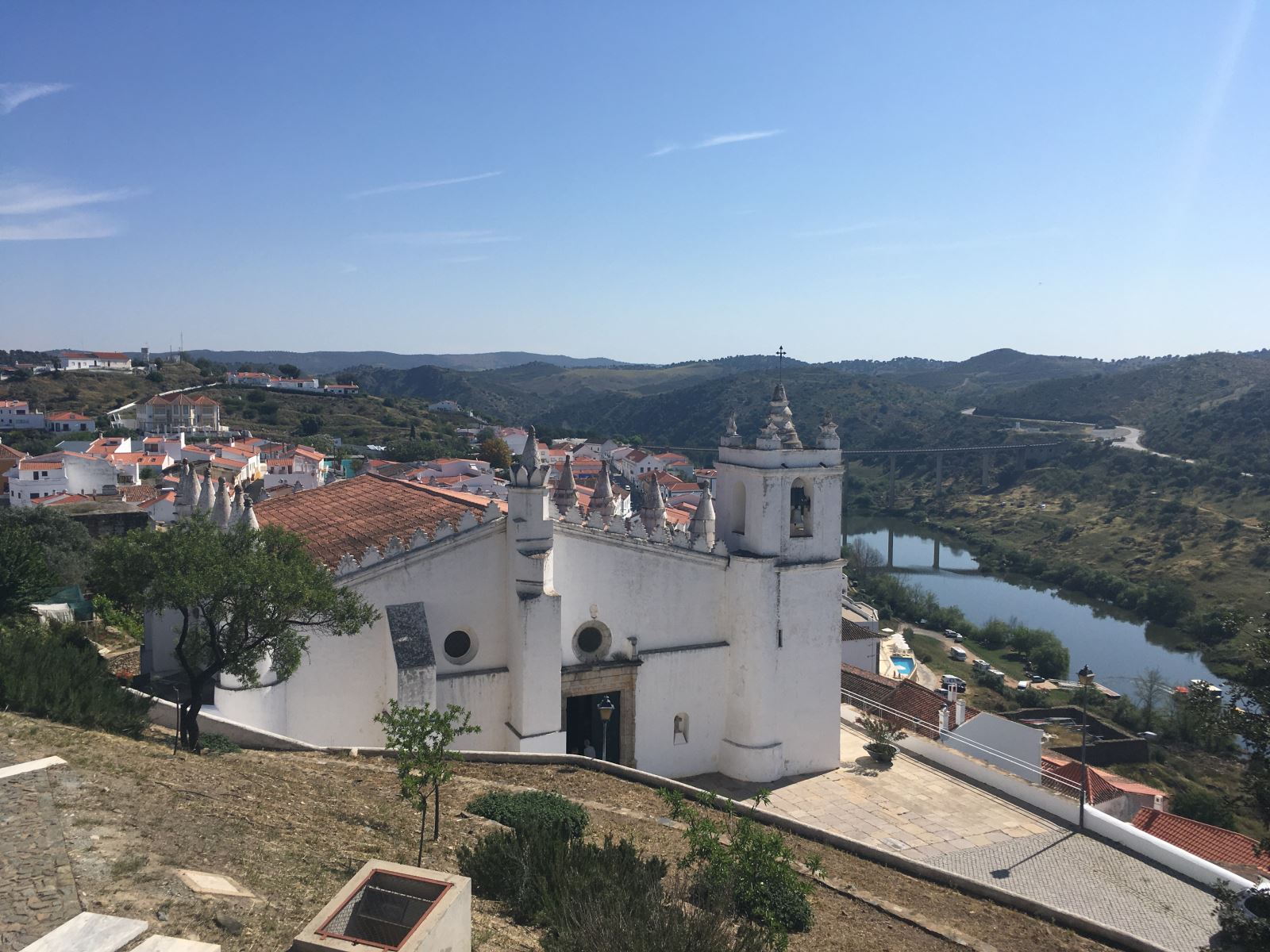 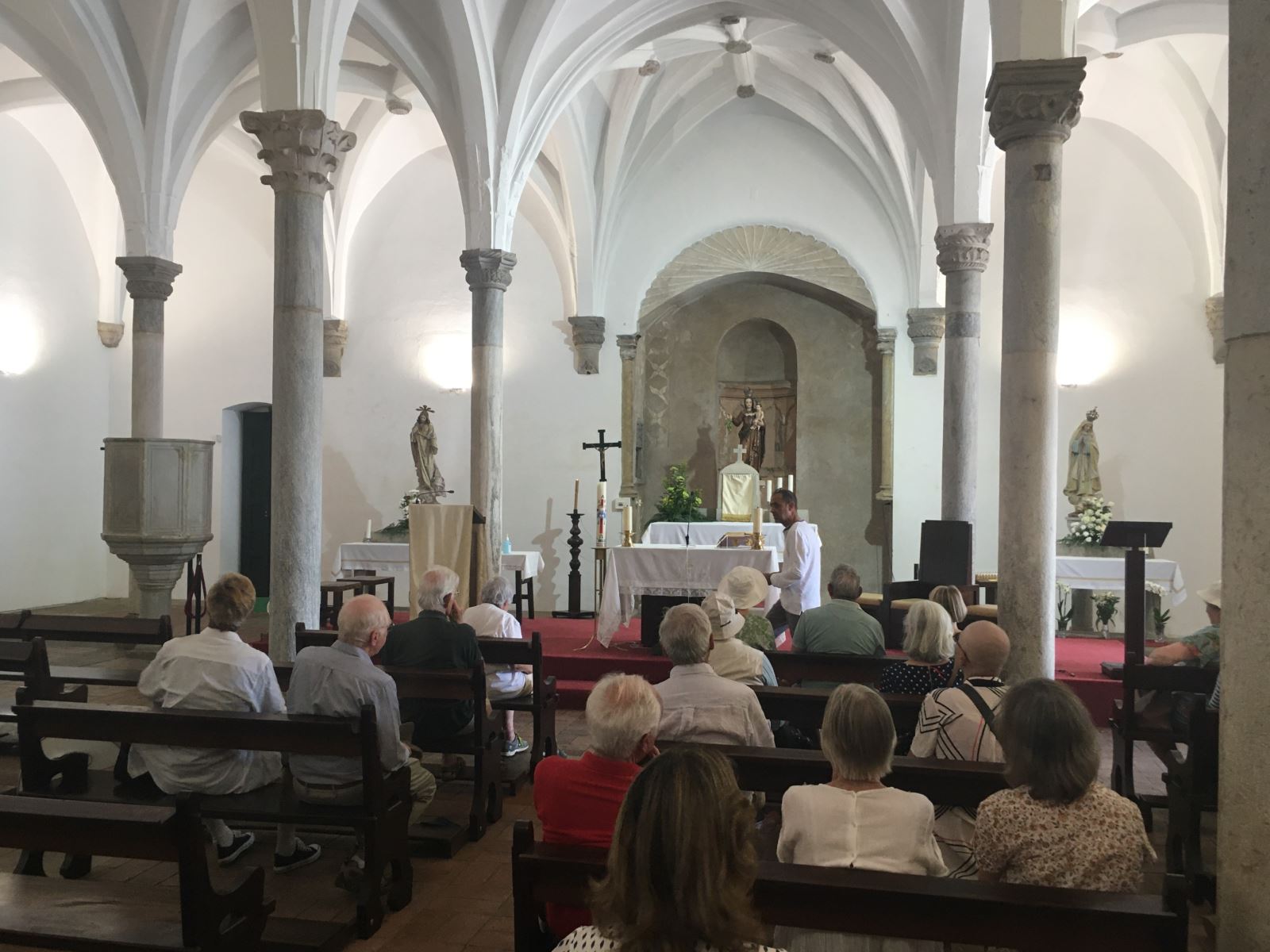 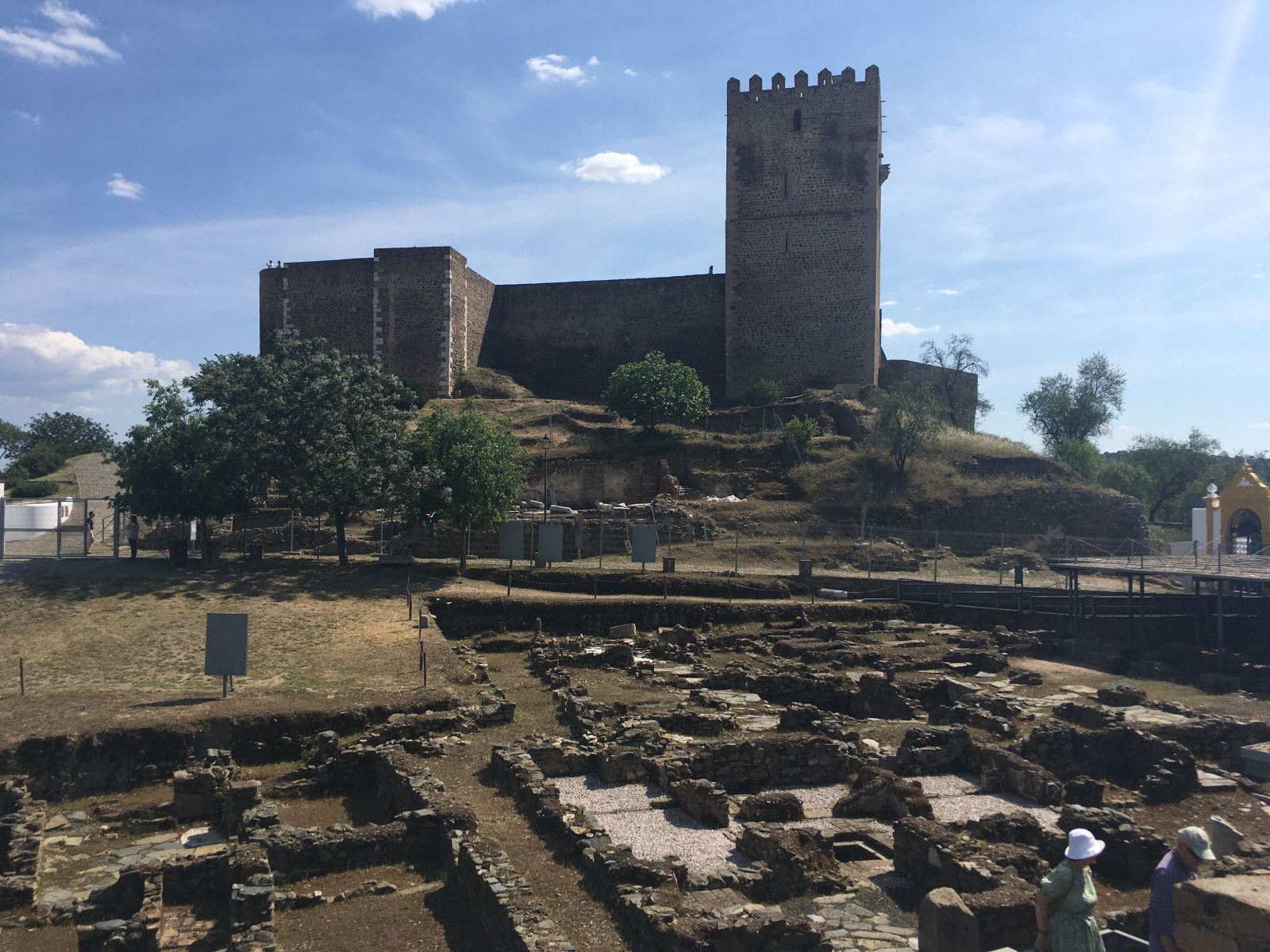 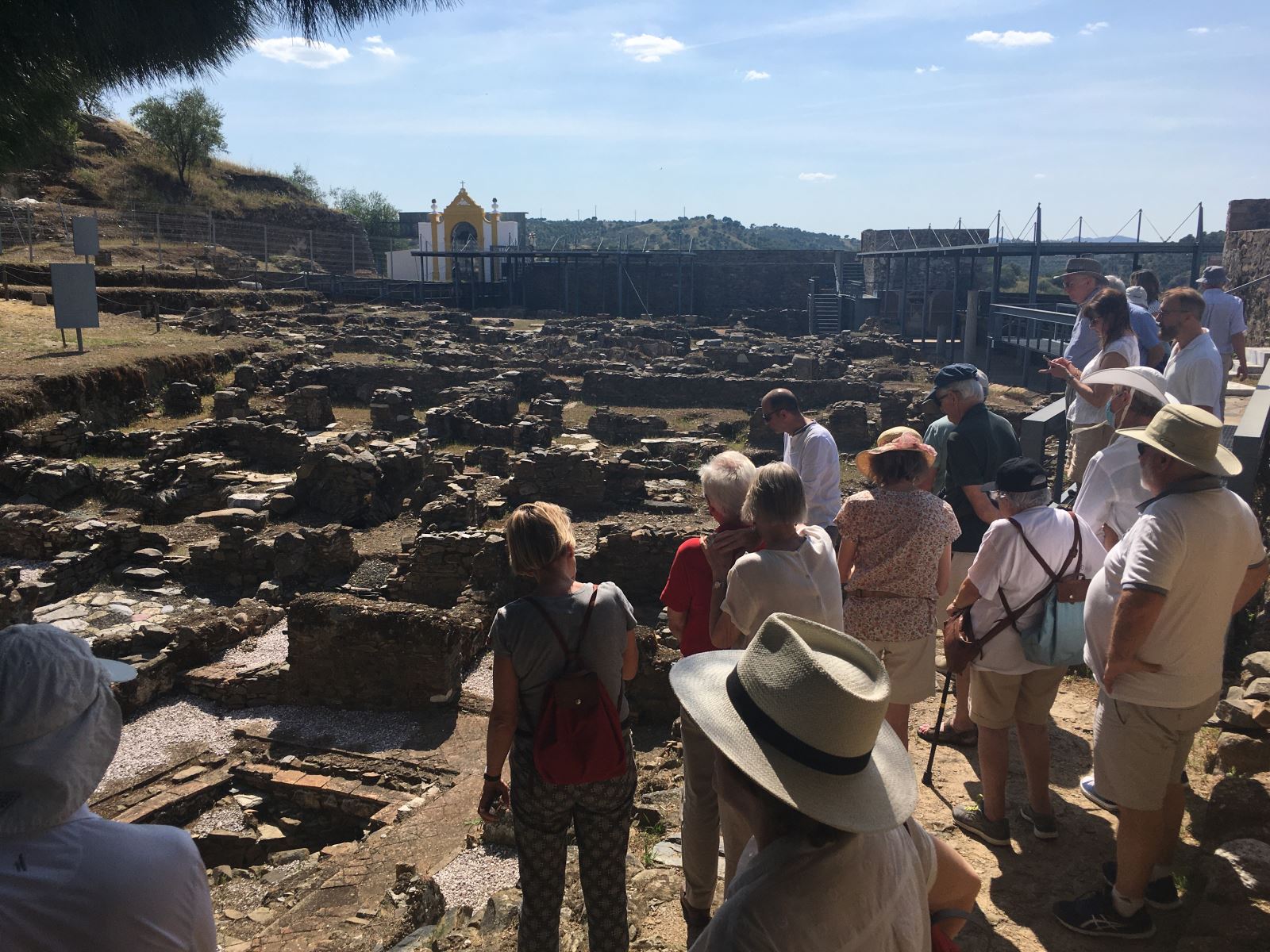 Sunday morning was left free for Members to walk through the narrow streets of Mértola at their leisure and many climbed the impressive tower of the restored Moorish and Medieval Castle. The return journey to Lisbon was broken by a superb lunch at the ‘Sabores do Monte’ restaurant at Santa Vitória, in the countryside west of Beja. The excellent organisation and the overriding bonhomie and animated fraternisation contributed to a most enjoyable excursion, which will be hard to repeat. 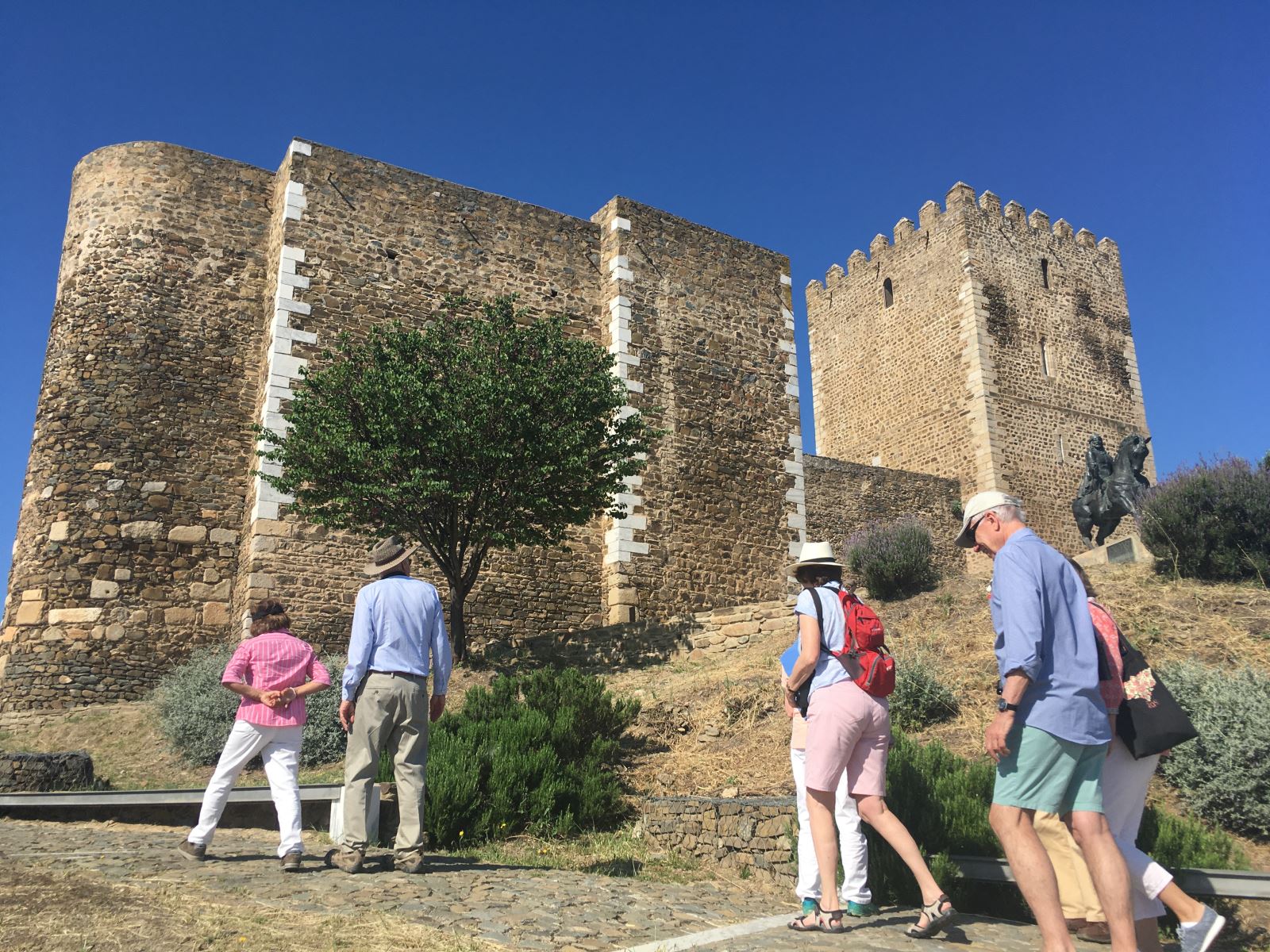 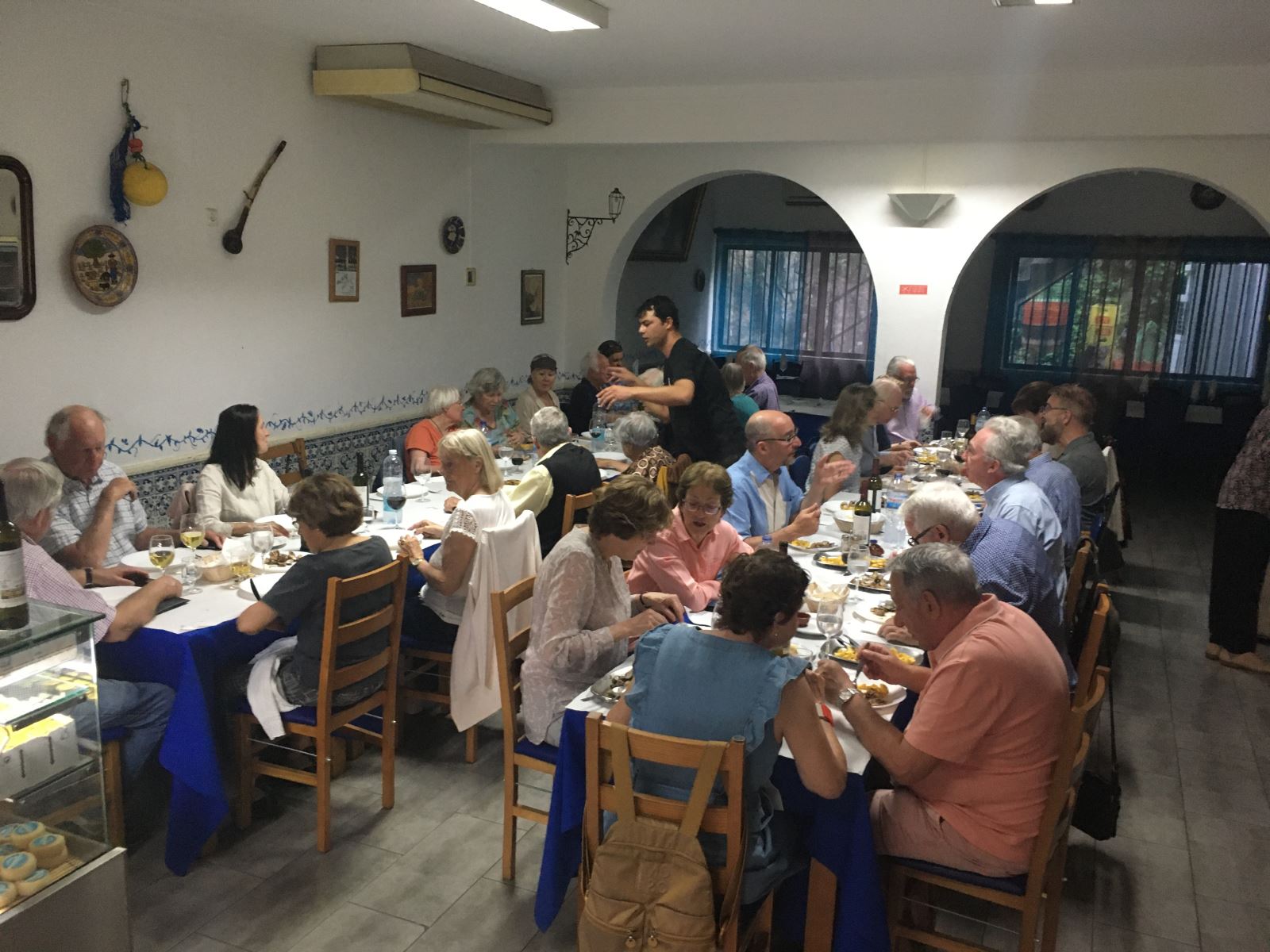