On the 6th of December, 20 Members of the BHSP enjoyed two guided visits - the first was to the Lisbon Synagogue and the second to the Medeiros e Almeida Museum. At the Synagogue, our lively guide explained that the Orthodox Jewish population in Lisbon numbers a mere 2,000, of which 300 worship on the Sabbath at the Synagogue. They are from the Habad (Chabad) Ultra-Orthodox Hasidic sect. 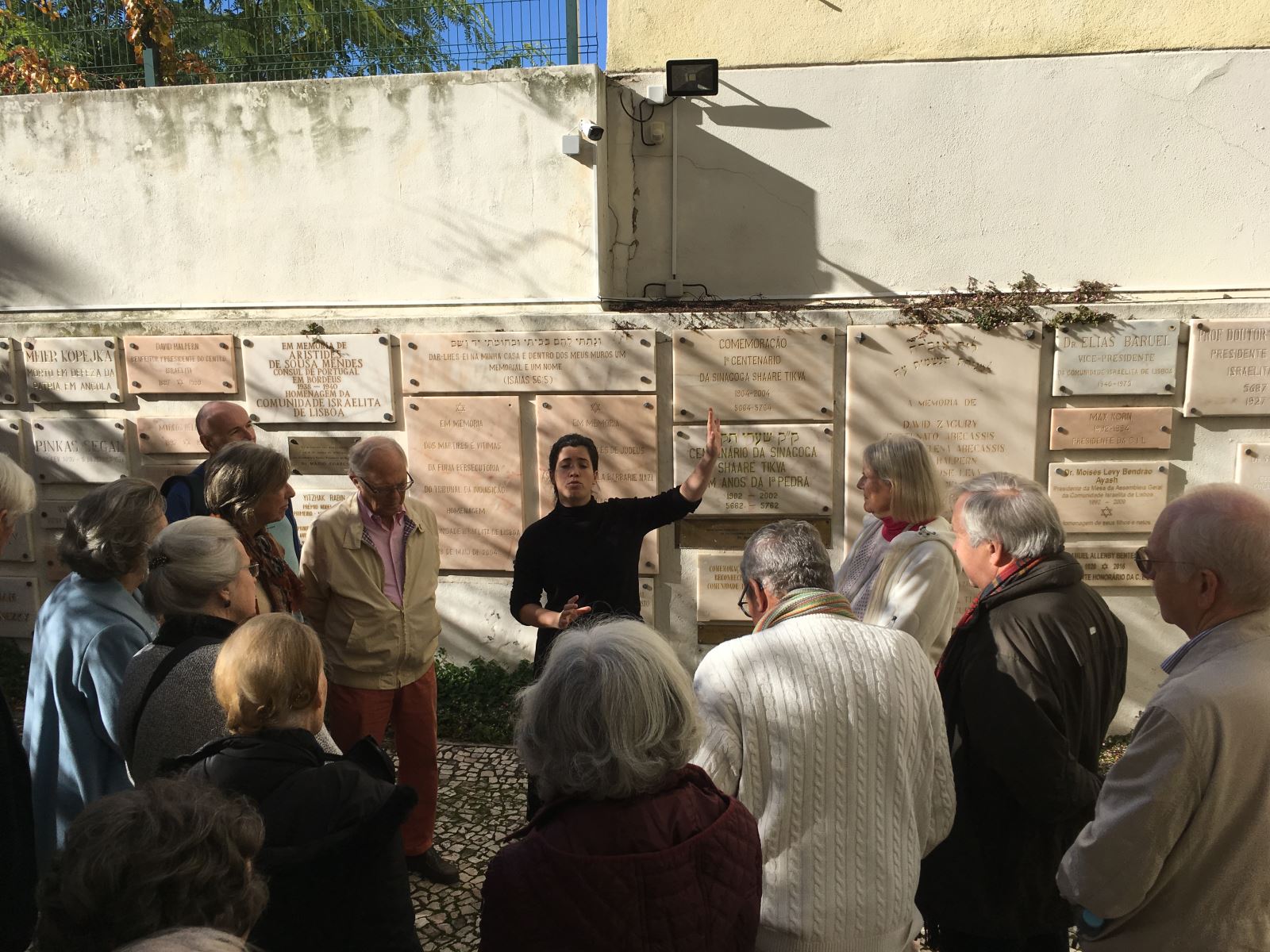 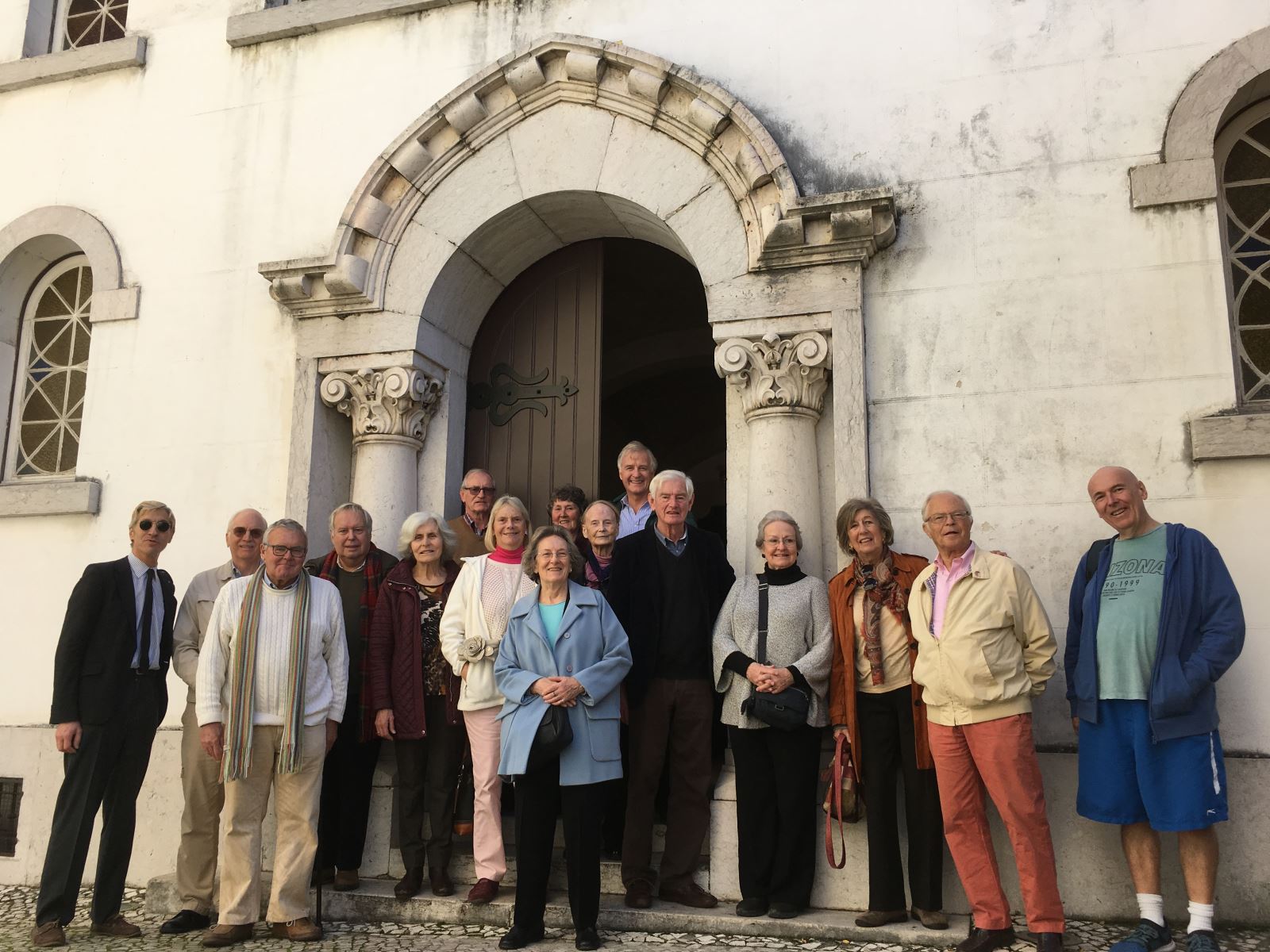 There have been Jews in the Iberian Peninsula from the Sephardic sect since over two thousand years ago, before the Romans. They lived in harmony with the Moors and Catholics alike until they were expelled or given the option to convert to Christianity in 1497 by D. Manuel I, on his marriage to the daughter of the ‘Reis Católicos’, ordered the Jews to either or leave. Those that converted to Catholicism were known as the New Christians (Cristãos novos), but the majority left the country. Descendants of this diaspora founded what are now considered to be the largest ‘Portuguese’ synagogues in Europe and further afield in cities such as Casablanca (Morocco), Istanbul, Amsterdam and London, where Sephardic Jews worship in the Spanish Moroccan tradition to this day, speaking Ladino, the Judeo-Spanish language developed from Yiddish by Sephardic Jews in Spain and Portugal.

The synagogue is relatively recent, having been built by Jorge Samson in 1902, shortly before the newly-proclaimed Republic legalised Jewish worship in 1912. It was the first synagogue to be built in Portugal since the late 15th Century, shortly before the pogrom of 1506, which started with the infamous incident in the Igreja de Sao Domingos, near Rossio. The arrival of the Inquisition in 1536 reinforced the ban on practising the Jewish faith in Portugal. In the 19th Century, with the end of the Inquisition in 1821, some affluent families of Sephardi Jewish Portuguese origin returned to Portugal, mainly from Morocco and Gibraltar (such as the Abecassis, Bensaúde, Ruah and Sequeira families). The first legal burial of a Sephardi Jew in Lisbon was of a Briton - Joseph Amzalak, who was buried in a plot next to the British Cemetery in Estrela in 1804. He probably originated from Gibraltar. 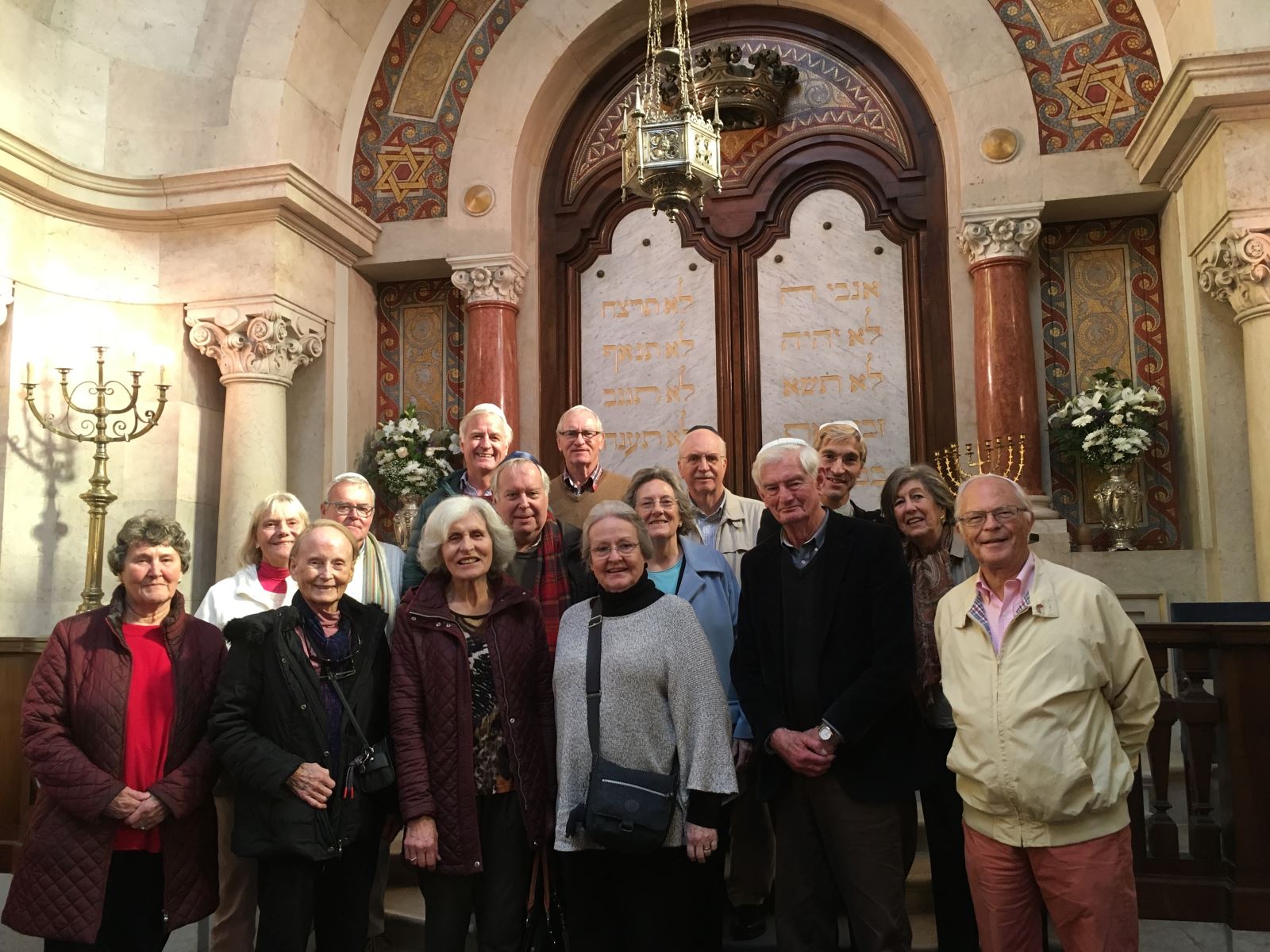 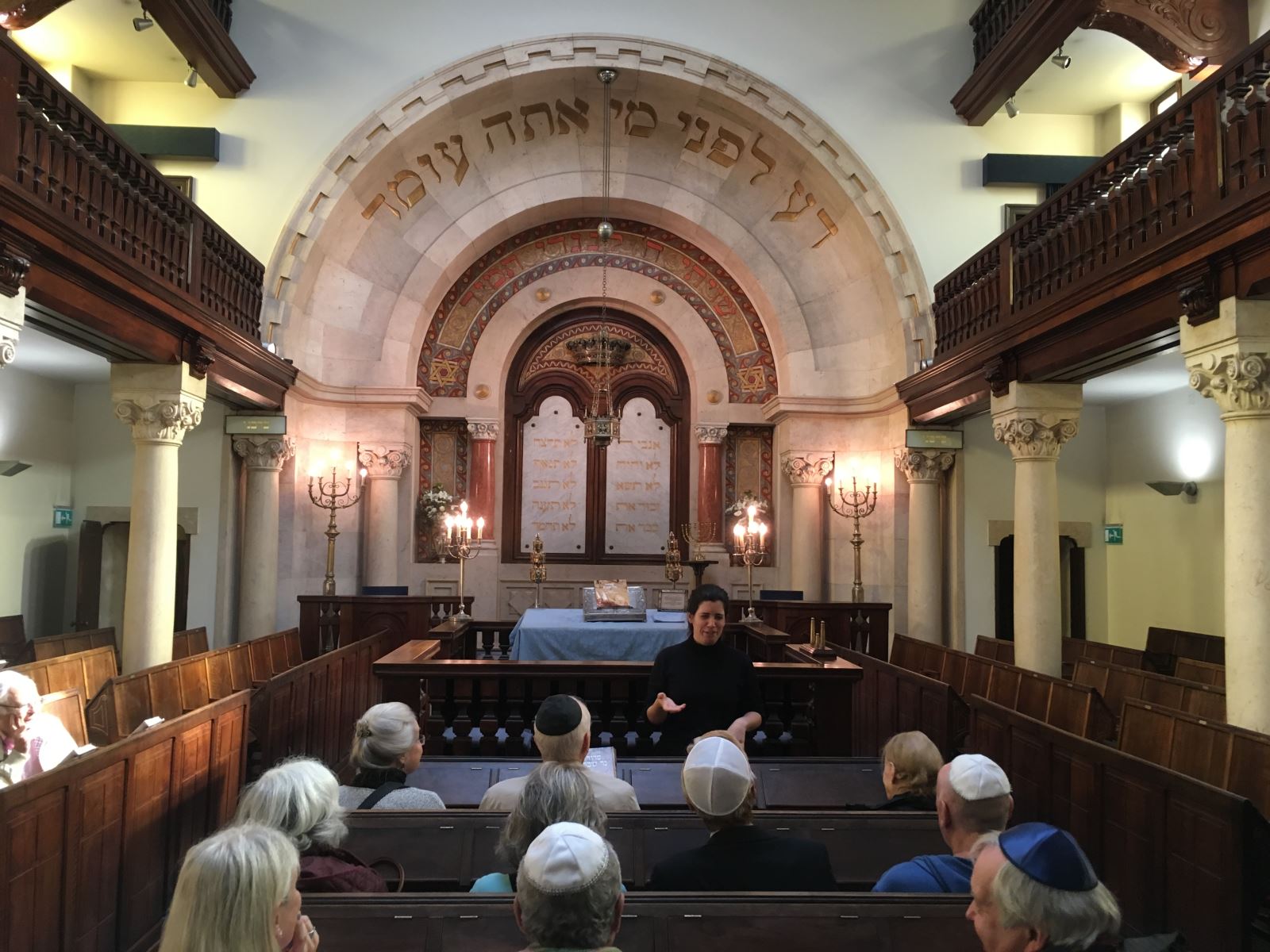 The construction of the Lisbon Synagogue is a mix of Roman, Byzantine and Romantic styles. The Torah scrolls are kept behind a sliding door representing the Ark of the Covenant and the Ten Commandments are written on the wall facing Jerusalem. Our guide explained that a minimum of ten men and the Torah are required for worship and that the women sit up above the men, whom they are not allowed to touch in public. Pork meat and shellfish are considered un-Kosher food and any form of work is forbidden on the Sabbath, including even flushing the loo. The light steaming in from the south-facing blue and yellow stained-glass windows comes together to represent the same light at dusk, heralding the start of the Sabbath. The Jewish Cemetery is located at the Alto de São João, near Santa Apolónia. The Belmonte Jews, known as the Marranos, opted to practice their faith in a strict secret isolated community and some 55 have survived to this day, although sadly they go blind aged 40, as a result of intermarriage. During WW2 the Jewish congregation at the Synagogue burgeoned with so many refugees, perhaps the most famous being Peggy Guggenheim. Very recently, in 2015, the Portuguese government passed the law of nationality, and already some 20,000 Portuguese passports have been issued to descendants of the exiled Jews of the 16th century. 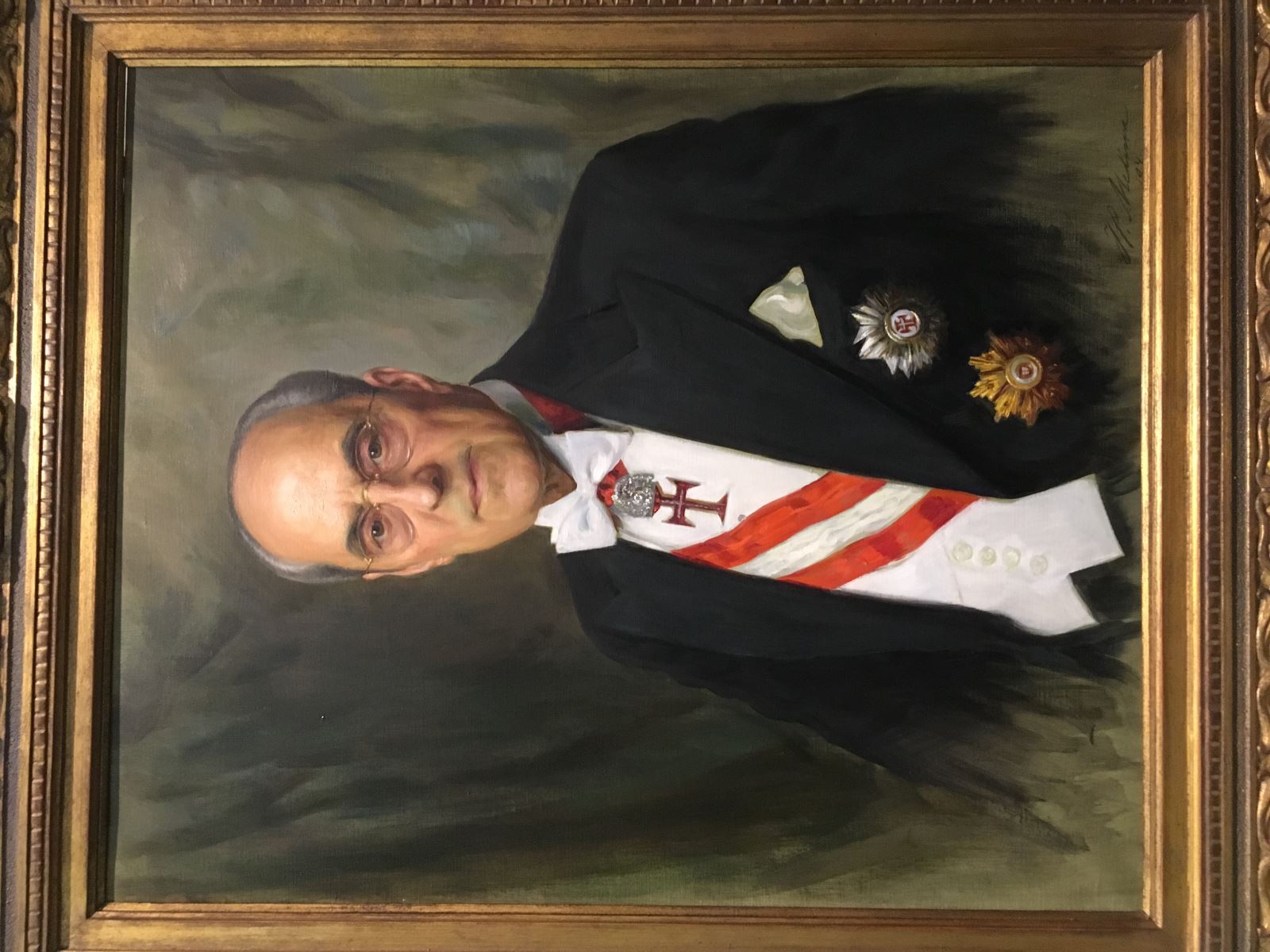 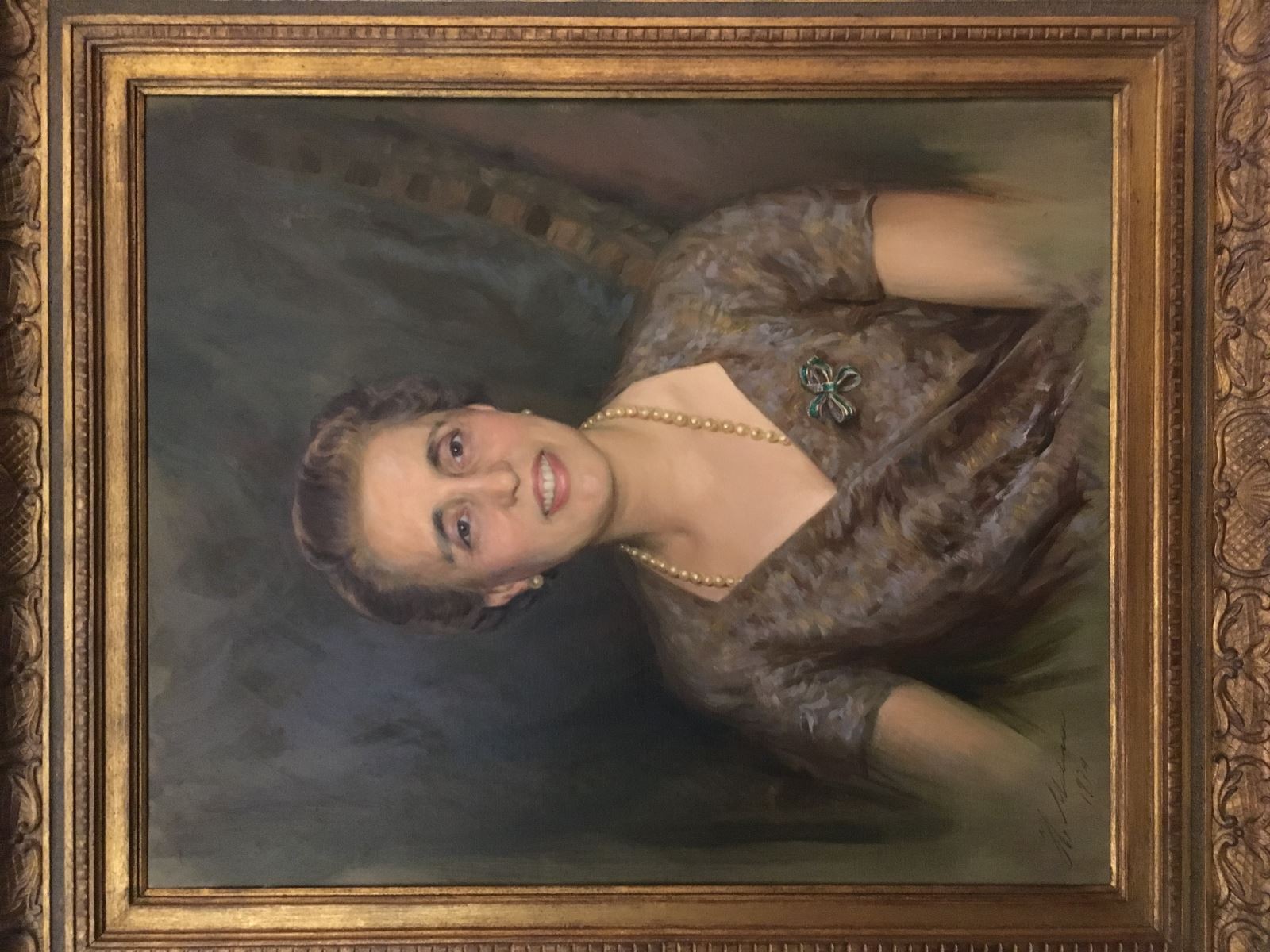 The collector, António Medeiros e Almeida was born in 1895, the eldest son of a family from the Azores, that had interests in the Casa Bensaude in sugar, textiles and shipping. He trained as a doctor and then became a successful businessman, marrying Margarida Pinto Basto in 1924. He was one of the founders of the SATA and TAP airlines, was the sole importer of Morris cars and built the Ritz hotel. An avid collector of religious art and Chinese ceramics, as well as English and French furniture, clocks and watches, he bought the embassy of the Vatican in 1943 and moved in later in 1947 until his death in 1986. He built a museum next door to house his vast eclectic collection and created a foundation in 1960 as the couple had no children. To this day, the Foundation is mainly funded from the rents from a block of offices which he constructed in the corner of his substantial property. He helped hundreds of Jews escape to the US on ships from his shipping line, CIN, and was awarded the OBE in 1947 by King George VI for making his airline and port facilities in the Azores available to the Allied forces. 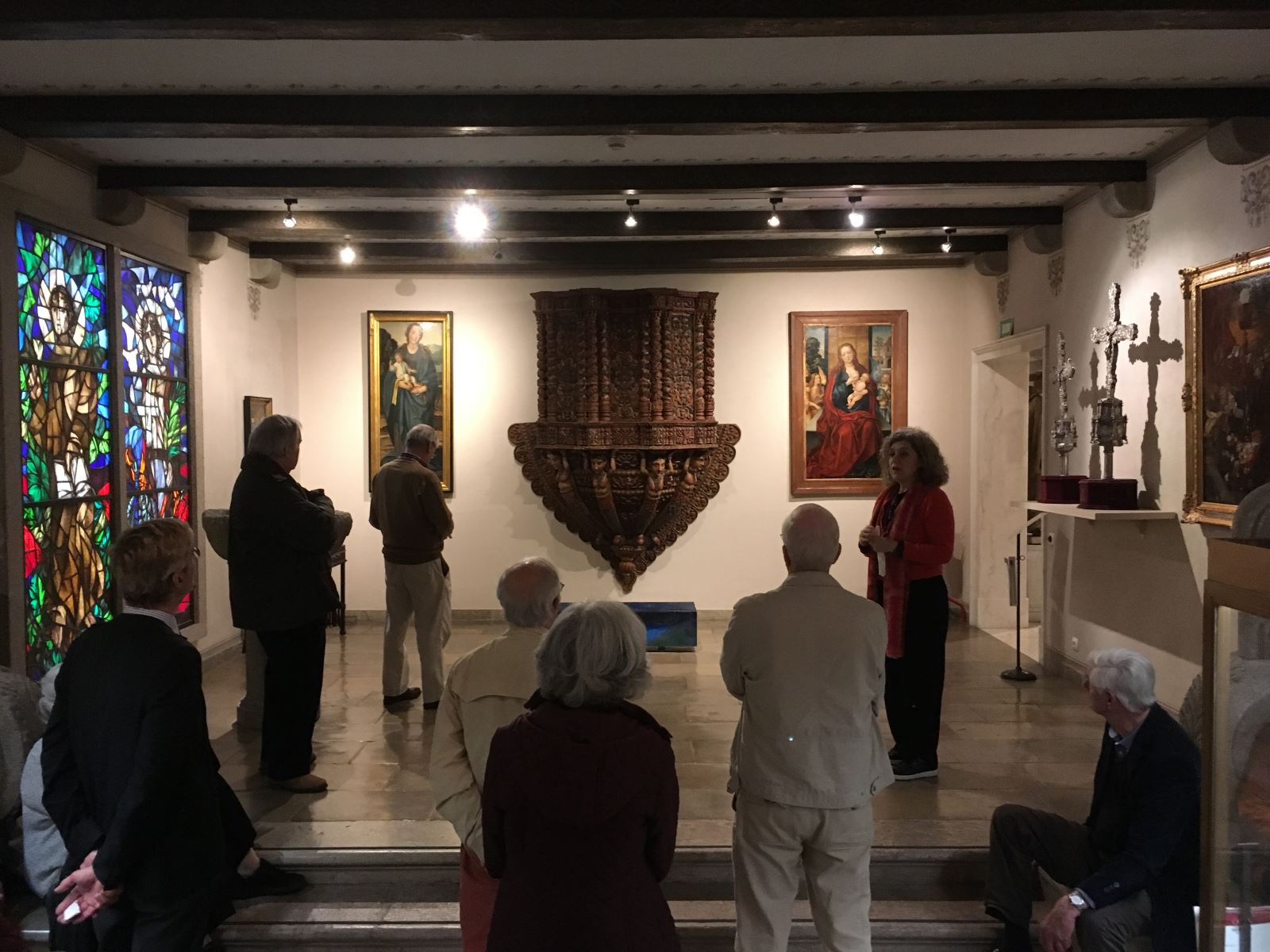 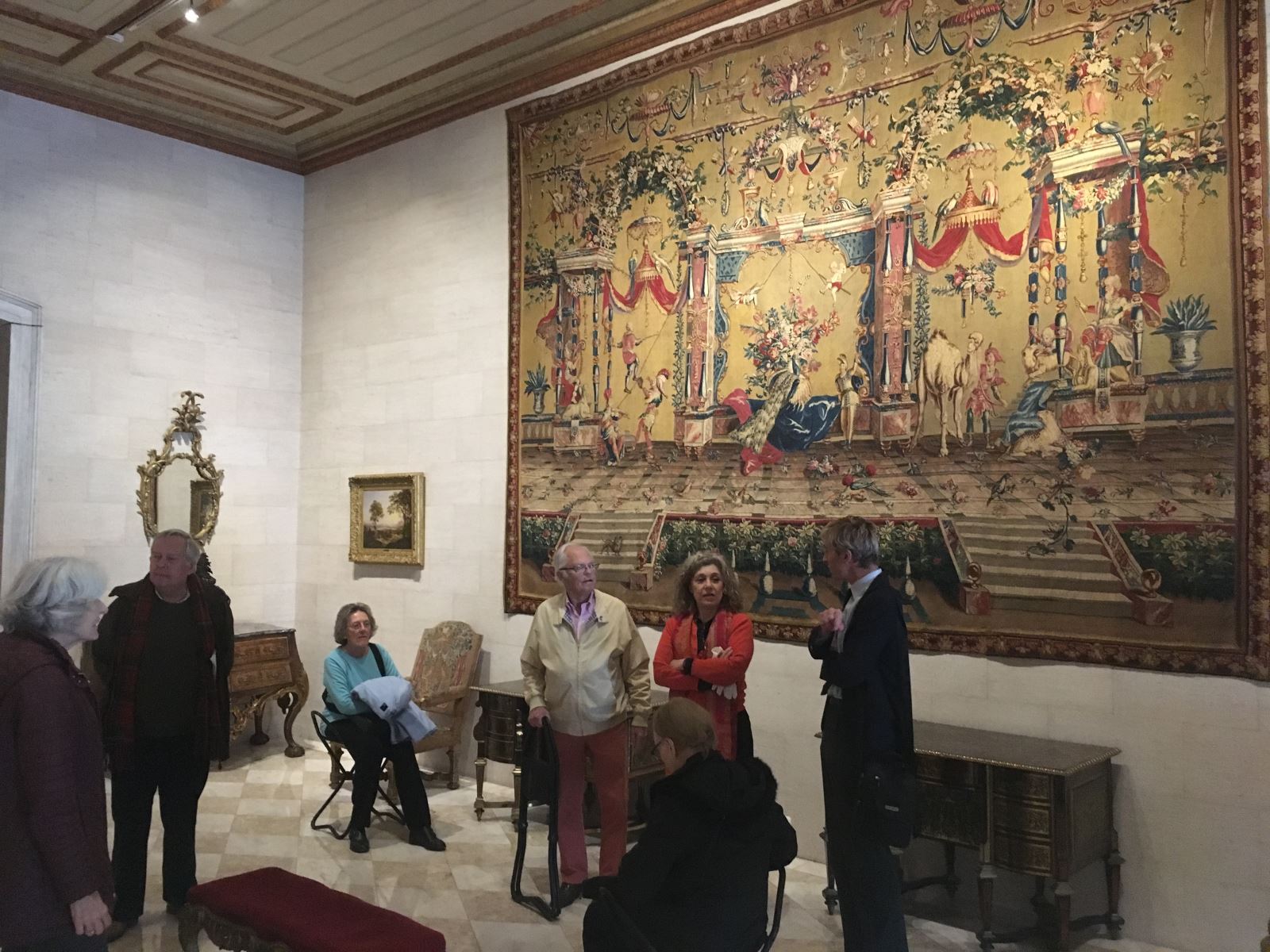 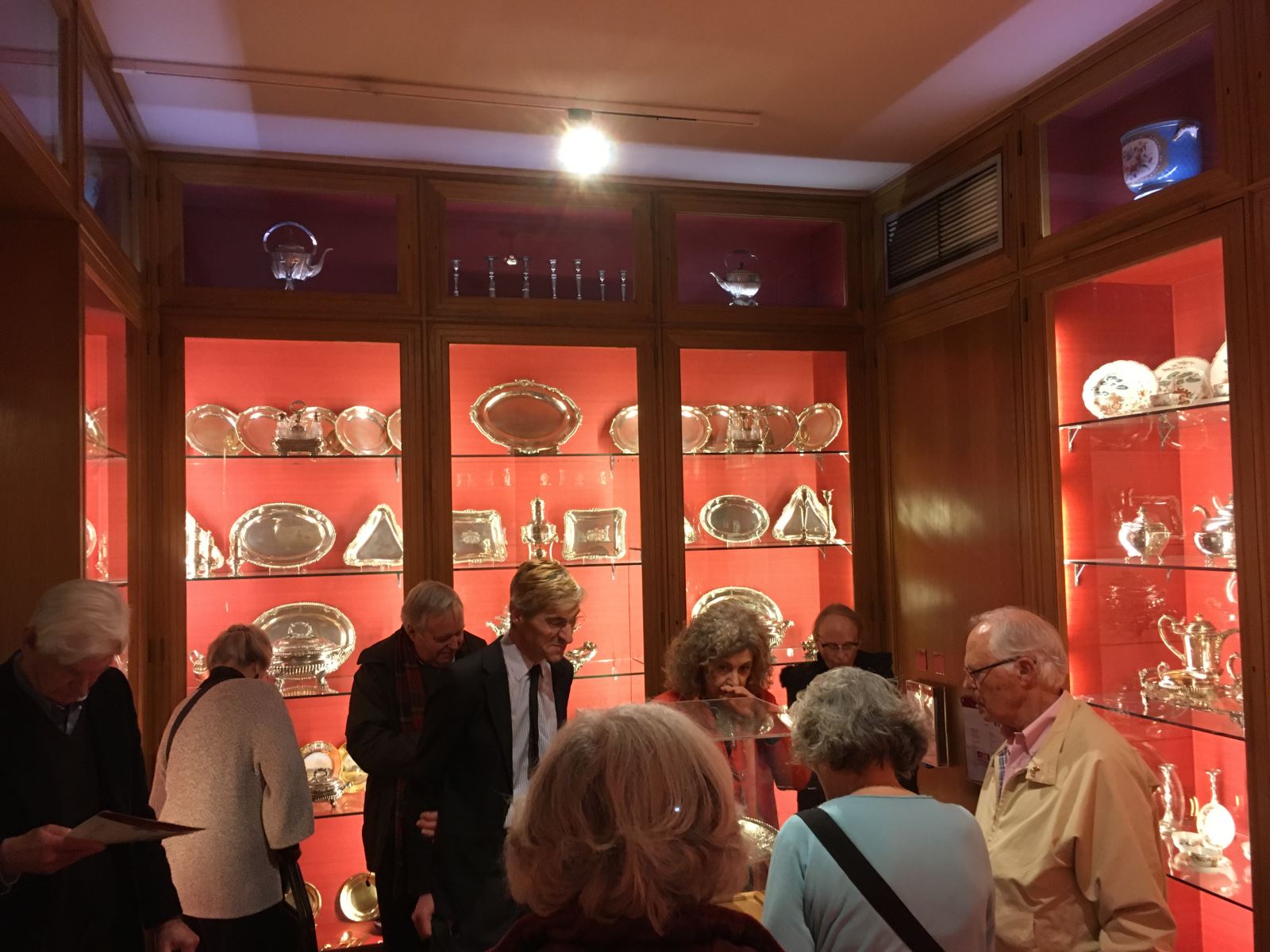 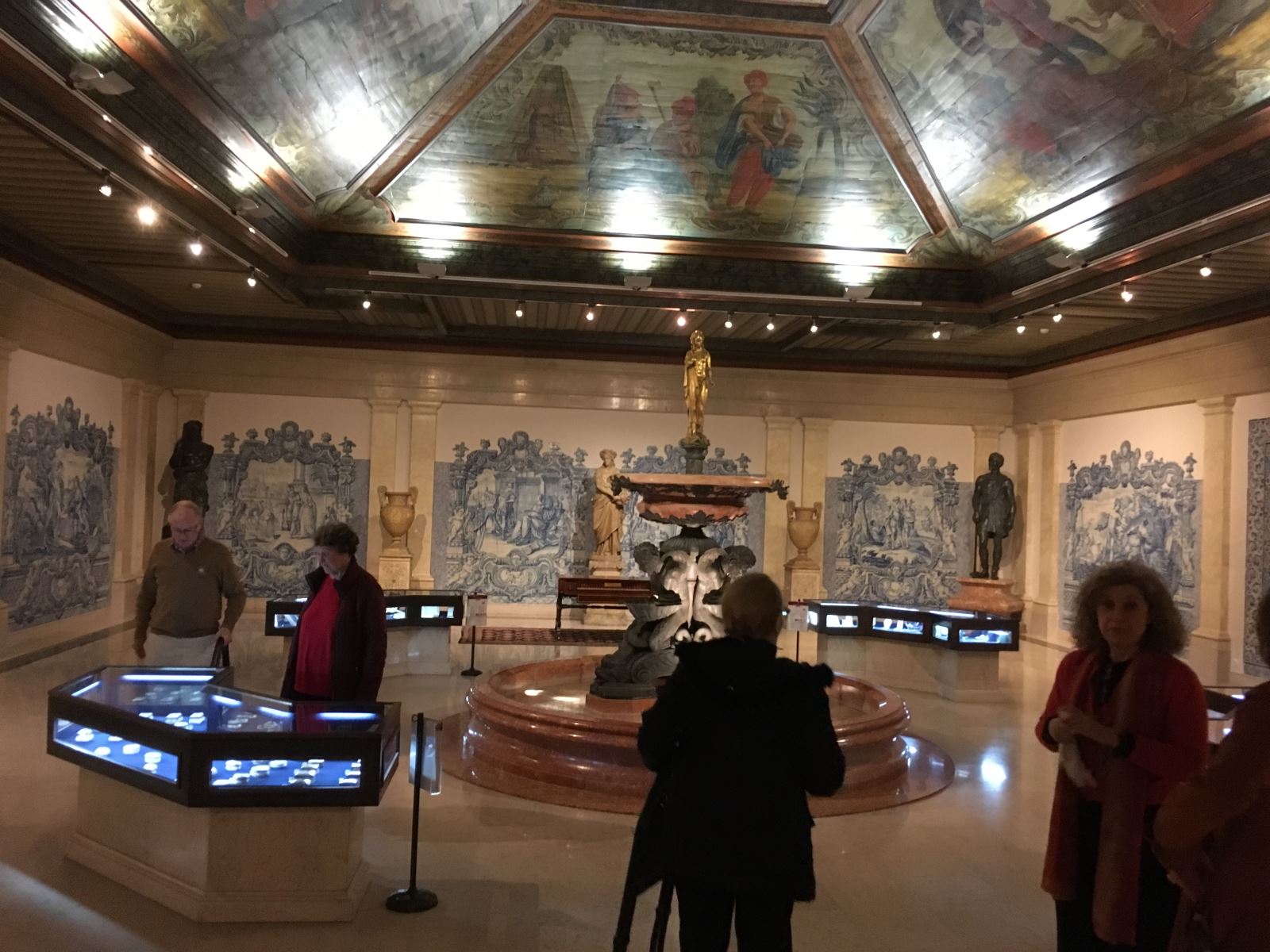 The group was treated to a two hour-long guided visit and, amongst many treasures, we were shown Ming porcelain from the 15th Century, a teak pulpit from the Igreja de Nossa Senhora do Monte in Velha Goa dating back to 1710, General Junot’s Breguet watch, a tricycle given to the Duke of Wellington’s son, the Marquis of Douro and five large tile panels depicting the four seasons and four continents from an old Irish convent in Carnide. 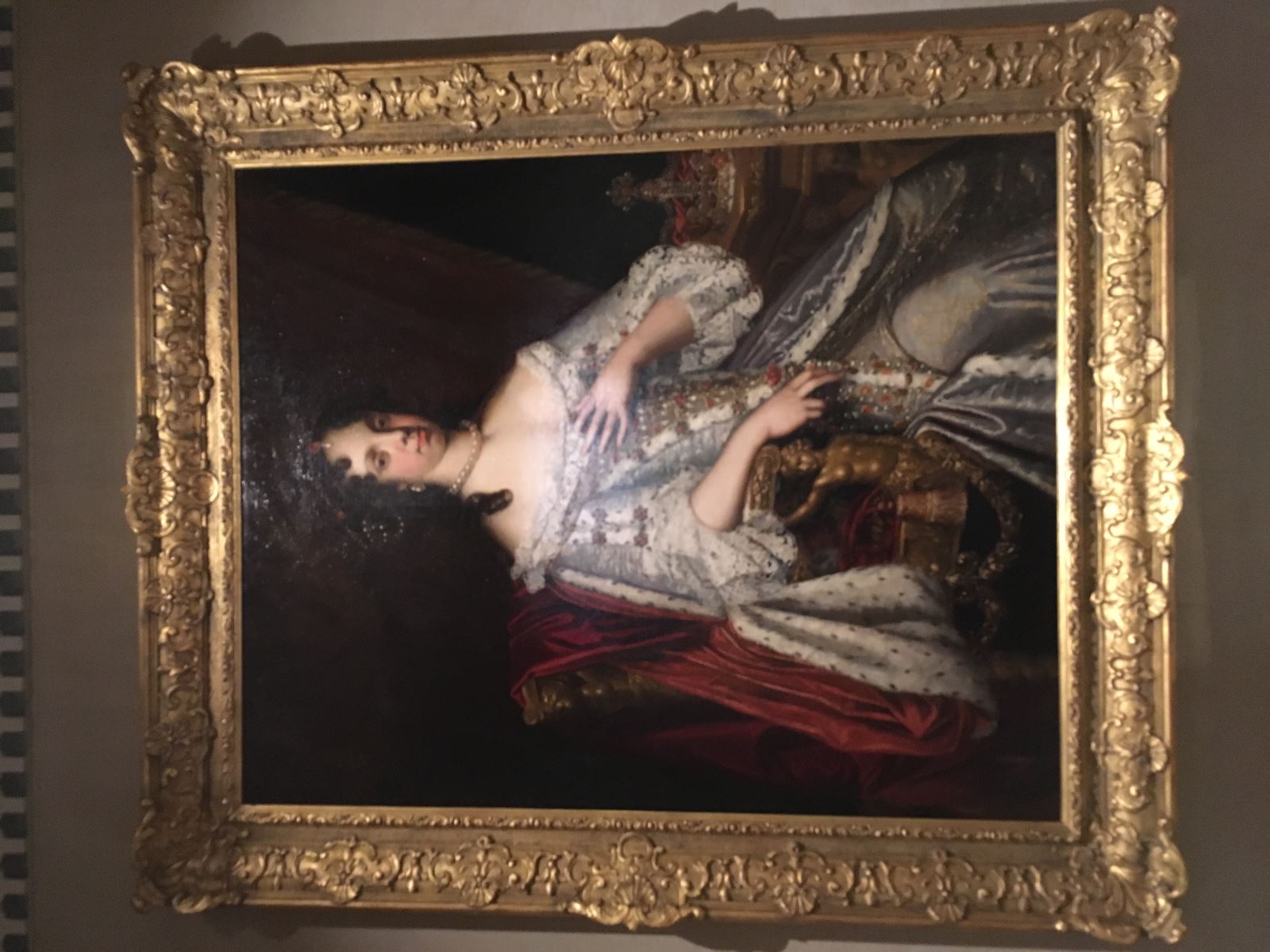 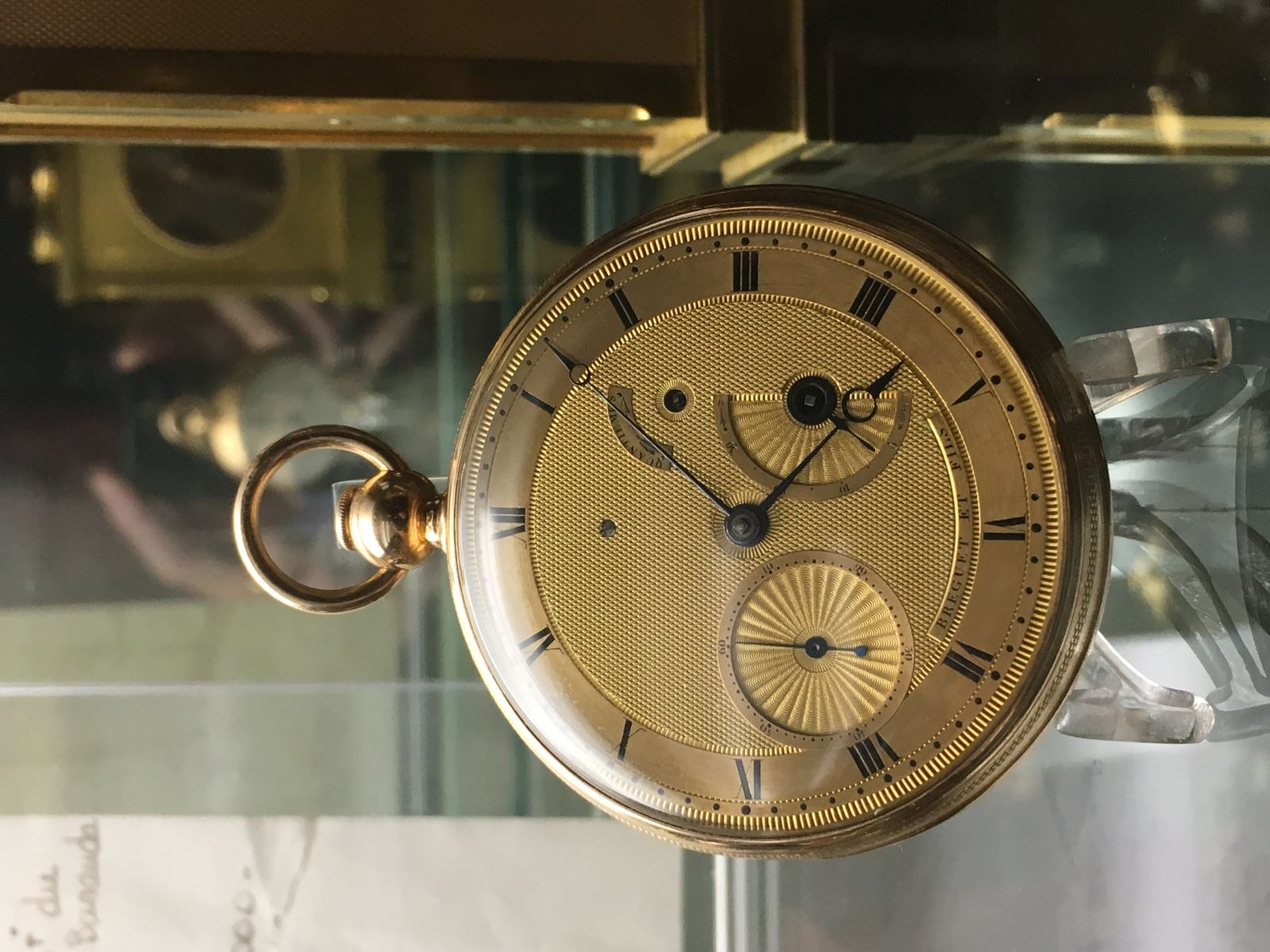 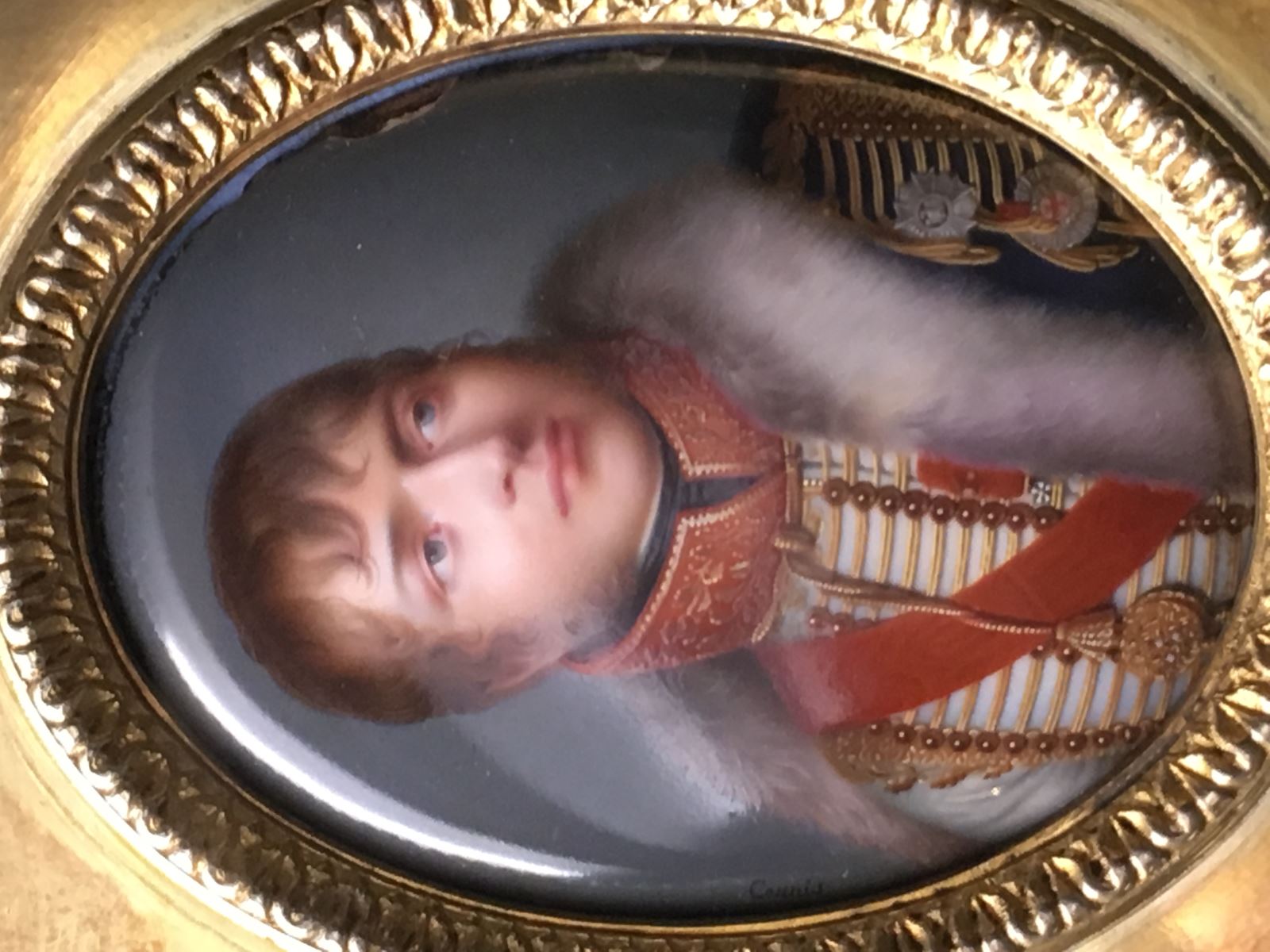