On 25th November 2010, a fine, cold autumn morning, 26 members of the BHS Lisbon branch set out to visit the area of Rio Maior, just over an hour’s drive north of Lisbon.

In the village of São João da Ribeira we met up with our two friendly, knowledgeable and very efficient guides, Cristina and Carlos.  We saw the local Ethnographical Museum, located in a fine large space, very light and airy and well arranged, and then went on to see the parish church with its curious circular tower.  A tile panel nearby illustrated the legend of the three earthenware pots said to be buried on the local hill top, the Alto de São Gens.  The legend says that two of these pots are full of gold, whilst the third contains germs of the plague.  Naturally nobody has ever even tried to find them!

Salinas Rio MaiorOur next stop was at the Salinas de Rio Maior, one of the highlights of our visit to the area.  These very extensive salt pans collect water which bubbles up from a source deep under ground and which is eight times more salty than sea water and completely pure, free of any industrial additives.

Each salt pan is privately owned although they have banded together in a co-operative to sell the salt, mainly for export.  The pans are surrounded by a number of small wooden buildings, originally the torehouses of the individual owners.  Many have now been converted into picturesque bars and shops selling individual salt “cheeses” (so-called because of their shape and size, rather like a small goat’s cheese).

The houses have characteristic wooden door locks – the wooden cross-bar serves as a key, easily carried in the pocket, and when it is removed it is impossible to open the lock.  The ideal time to visit the salt pans is from May to September, when warm sunshine causes the water pumped into the pans to evaporate in the course of a few days leaving behind piles of gleaming white salt. 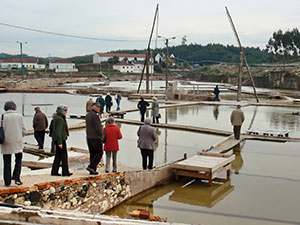 The second highlight of the day was an ample and delicious lunch in Alto da Serra, up the hill from the salt pans.  The food was good, the wine excellent, and the morcela was to die for.

Sated but ever willing, our 26 valiant travellers spent the afternoon in the small town of Alcobertas.  An impressively large pre-historic dolmen here was used in medieval days as the parish church.  Later it became the chancel of a larger church and still later, when the church was rebuilt again, the orientation was changed once more and to this day the dolmen is a side chapel of the modern church, dedicated to St. Mary Magdalene.  A few at a time members edged in to this small floor space and gazed up into the dark reaches of the dolmen’s peak.

Alcobertas held other points of interest:  The Olho d’Água is a fresh-water pond served by underground springs;  for centuries it provided drinking water for people and cattle, whilst the far end of the pond was used for washing clothes.   In the 1950s medieval silos were found buried in the clay hillside nearby.  The biggest is around 1m across and 2m deep.  It is thought they may have been used to store corn and other foodstuffs in periods when warlords fought back and forth across the countryside.  A medieval communal kiln has been rebuilt to show how the processes by which the local clay soil was used to make bricks and other building materials.

It would be difficult to go home from Rio Maior without taking along a few samples of one of the town’s specialities and Cristina’s last gift to the group at the end of an interest-filled day was a stop at a local bakery to buy large quantities of pão de ló, rich with huge amounts of egg yolk – a menace to the liver but a real delight to the sweet of tooth.