A temperature of forty scalding hot degrees in the shade was the dominant feature of the 2013 British Historical Society Picnic, an annual event which this year took place in Salvaterra de Magos, on the south bank of the River Tagus, just over an hour’s drive east of Lisbon. 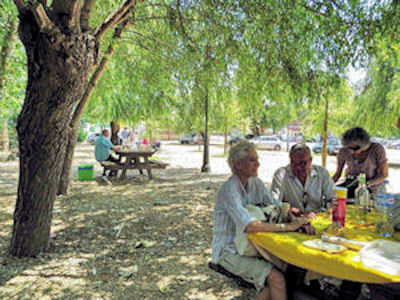 Not that the heat discouraged the 21 members from the Lisbon area, five from our Caldas da Rainha branch and three from the Algarve who all showed remarkable resilience in the searing heat, helped in the morning by a delightful little breeze.

Salvaterra de Magos was a favourite home of the kings of Portugal from the early Middle Ages, when regular summer outbreaks of plague drove them away from the larger towns, and right up to the 18th century. Little remains now of their huge, rambling summer palace, which was largely destroyed by the great Lisbon Earthquake of 1755, but it must have been a wonderfully cool building with many fountains and gentle breezes to hold their affection for so many centuries.

Our first visit in Salvaterra was to the home of pioneering woman bullfighter Ana Batista, a fair-haired young lady who must have started bullfighting as a baby, given the fact that she has just celebrated her 25th anniversary in the profession. In her stables Ana introduced us one by one to her dozen or so horses, some pure Lusitanos and others a blend of Anglo-Portuguese and Arab blood, all beautiful in themselves and in wonderfully good condition. Whenever she is not away at a bullfight Ana Batista welcomes visitors who come to see her working her horses in her specially constructed mini-bullring; light high clouds and a glorious little breeze made it possible for us to watch for over an hour in the shade of surrounding olive trees whilst Ana put several of her mounts through their paces.

On the banks of the Tagus, some 10 kms away along a narrow country road, we found the fishermen’s village of Escaroupim where a shady picnic ground well-provided with tables and benches enabled us to share our picnic lunch in some comfort – although the highlight of the picnic ground was quite certainly the outdoor tap which provided generous spurts of chilly water to wash off our picnic utensils and simultaneously spray a nice cool shower over legs and feet! (A fine restaurant nearby offers an interesting alternative to a picnic.)

In the afternoon we returned to Salvaterra de Magos to visit the “FalcoariaReal”, the royal falconry which was once an important part of the summer palace. Sadly the weather was too hot for the planned demonstration flight from the falconry’s great variety of birds of prey but whilst visiting the interesting permanent exhibition of falconry down the ages we learned that the present-day residents of the building are not museum pieces – they provide a service by clearing fields and even airports of local birdlife. A field where a few hungry falcons are known to hover overhead two or threetimes a week is not likely to prove attractive to small birds!

Altogether this was a happy and interesting day and many people promised to return later in the summer bringing holiday-making family members to enjoy a similar experience. All the places we visited are available to the public free of charge although it is best to phone ahead to avoid possible disappointment. One of the most entertaining parts of our day, though, was only enjoyed by those brave enough to walk under the blistering mid-day sun to visit one of the fishermen’s houses in Escaroupim, now kept as a small museum. 71 year-old D.Cassilda, who welcomes visitors, was the oldest of 9 children of a local family and told us that her parents used to come each year from the storm-wracked beach at Praia da Vieira, near Leiria, to spend the winter months fishing for freshwater fish, shrimps and eels, a form of subsistence fishing, since although they sold part of their catch to a buyer from Vila Franca da Xira who waited for them when they returned to shore in the early hours each morning, the women also took much of the catch to a neighbouring village to exchange for vegetables and groceries.

This part of the Ribatejo was regularly flooded each winter and so the brightly painted wooden houses were built on stilts and reached by steep wooden outside staircases. But the story which made our day was D.Cassilda’s assertion that whilst the children slept in the two tiny bedrooms – girls with their mother in one room, boys in the other, with a “loft” above for the toddlers – the fathers always slept in their boats. The regular appearance of a new baby each year suggested that the mothers, too, often spent the night cosily covered by a tarpaulin in a gently rocking craft!