Early on a rather overcast July morning, sixteen members of the Lisbon branch of the British Historical Society of Portugal boarded a small bus in Estoril and drove some 150 kms north, via the A-8 motorway, to Exit No 22, where we turned off towards Alcobaça and then followed the signs to Maiorga and Cós. Here we met up with our guide, Manuela, and members of the Caldas da Rainha branch of the BHSP for a morning visit to the now partly restored convent buildings of SANTA MARIA DE CÓS, which the Society last visited in April 1994.

Our morning ended with a shared picnic lunch on a nearby hilltop, close to the little pilgrimage chapel of Santa Rita de Cassia, with its sweeping views over the highlands of Estremadura. 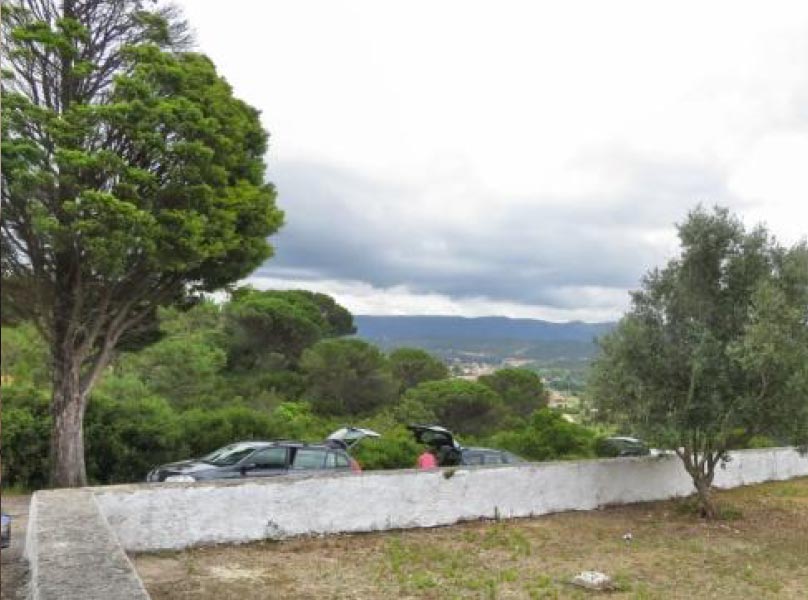 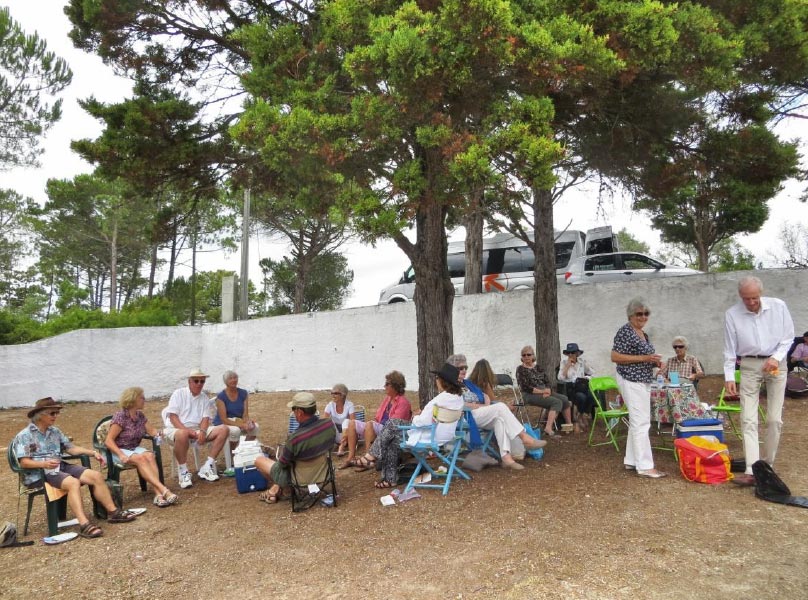 Situated some 14 kms from Alcobaça and 4 kms. from Maiorga (a place which is thought to have once had a navigable harbour, visited by Greeks and Phoenicians), the Monastery of Santa Maria de Cós was initially a secular establishment instituted as a shelter for widows and other worthy lay women long before Portugal became an independent nation under D.Afonso Henriques. With the passage of time Cós became a house for women religious and this convent was certainly in existence by 1241, date of the first written reference to the nuns of Cós.

It is known that the Monastery, which was located within the lands belonging to the Cistercians, was an economic dependency of Alcobaça. The Portuguese monarchs always took a special interest in Cós and down the centuries the monastery was granted many privileges. Its splendid buildings with their magnificent ornamentations were another manifestation of this royal patronage.
In 1834, by government decree, all convents, monasteries, hospices and houses of religious orders were closed down; the houses of women religious were kept open, under the control of the local bishop, until the death of the last nun, upon which they were closed. This was the case of the Monastery of Santa Maria de Cós.

In recent years restoration work has been carried out and although, sadly, the monastery does not have guided visits or regular visiting hours it is possible for private individuals to see the interior of the great church and the sacristy by calling the Junta da Freguesia, in advance, on 262 544 155.

Apart from the great church, with its strikingly austere exterior, little is left today of the old Convent of Santa Maria de Cós. 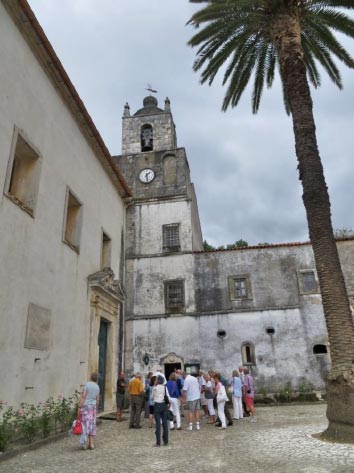 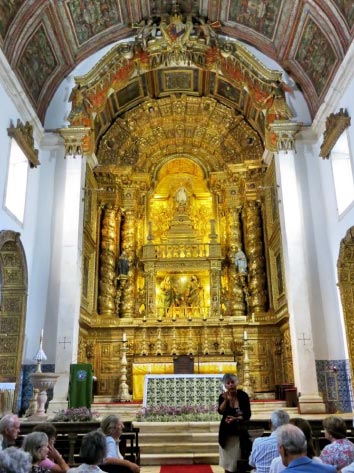 Present-day visitors enter through a small side door and find themselves in the centre of the church, with the nave and choir to their left and the choir screen (a recent replacement built in wood rather than gilded metal) and choir to their right.

One of the most noteworthy works in the church is the carved and gilded altarpiece for the high altar carried out by the well known Lisbon wood carver Domingos Lopes. The contract for this work, dated 9th March 1676, is still in existence.

In the choir a fine Manueline doorway may well be a remnant of works carried out in the 16th century under the orders of João de Castilho, architect of the Lisbon Monastery of Jerónimos. 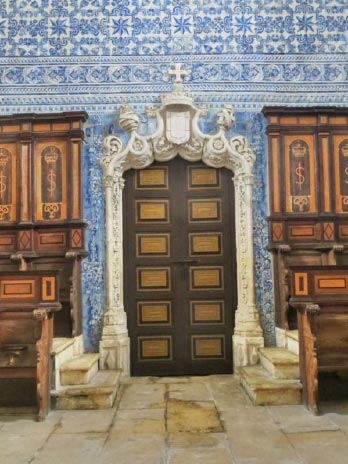 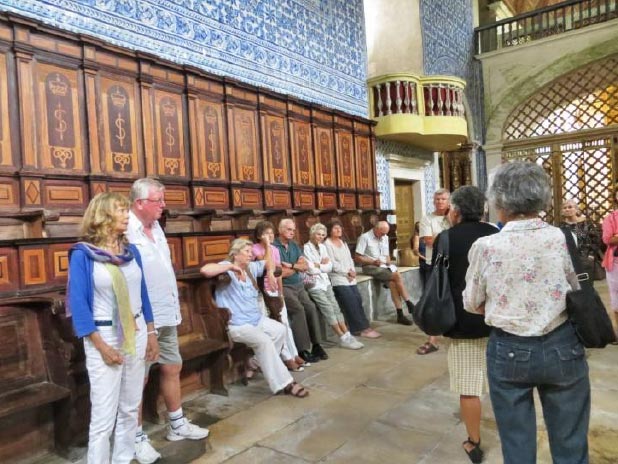 Among the highlights of the building are the coffered ceilings of the nave, choir, sacristy and vestibule which were carried out around 1715. The 80 ceiling panels are painted to show allusions to the life of the Virgin Mary, and allegorical symbols relating to the Cistercian Order. 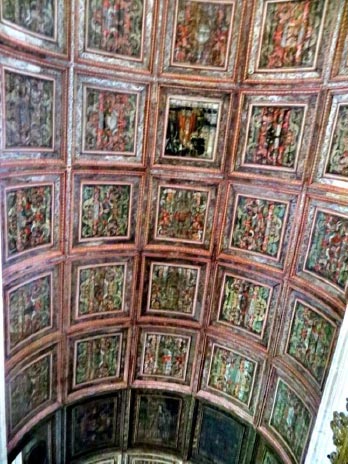 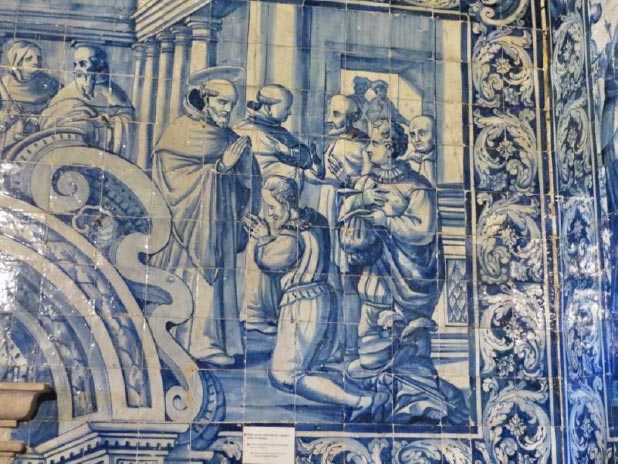 The walls of the small but richly decorated sacristy are hung with tile panels illustrating the life of St. Bernard, usually known as the founder of the Cistercians. These are attributed to Teotónio dos Santos and are based on Antonio Tempesti’s Vita et Miracula D.Bernardi Clarevalensis Abbatis published ih Rome in 1587. A small label beside one of the panel indicates that it shows “The King of England submitting to the Pope.“ Presumably this was Henry II, whose less honourable deeds included the instigation of the murder of Thomas à Becket.

Another, perhaps somewhat tenuous, link between Cós and England is that the third Prior of the Cistercian Order, back at the beginning of the 12th century, was an Englishman, Stephen Harding, born at Sherborne, Dorset. After studying at Sherborne Abbey he became a travelling scholar and eventually reached Burgundy, where he joined the Benedictines. Later he left for the new abbey at Cîteaux, where he worked with St. Bernard of Clairvaux and later served as prior for twenty-five years.

While no single person is considered the founder of the Cistercians, the shape of Cistercian thought, and its rapid growth in the 12th century, was arguably due to Harding’s leadership. Insisting on simplicity in all aspects of monastic life, he was largely responsible for the severity of early Cistercian architecture. He finally resigned as head of the order, because of age and infirmity in 1133 and died a year later. He is buried in the cloister at Cîteaux.

In addition to the widely acknowledged beauty of their architecture, the Cistercians also became famous in fields such as agriculture, hydraulic engineering and metallurgy and were the main force of technological diffusion in medieval Europe, as witnessed by the highly sophisticated water systems installed at Alcobaça.

The famous Portuguese baroque painter Josefa de Óbidos was active in the area of Alcobaça at the end of the 17th century and it is known that she produced several works for Cós, though these have since been dispersed.