A Walk in Moorish Lisbon

On a recent, beautifully warm, September morning twenty members of the British Historical Society of Portugal learned that in fact the hilltop here was fortified in the Iron Age, long before the Romans came along.Those early settlers recognised the value of this location with its wonderful natural harbour set close to the estuary of the great River Tagus. The settlers were peaceful people, as long as they were not attacked. Iron ore, gold and other valuable products travelled down the Tagus and the Iron Age settlers traded them with various maritime peoples including their greatest business partners, the Phoenicians, traders themselves who were not interested in conquest, only in buying and selling. 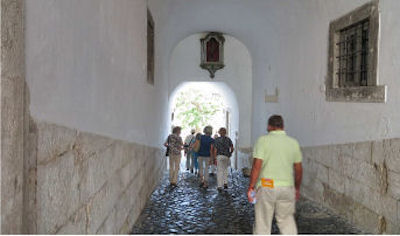 Everything changed with the arrival of the Romans about 200 BC. These were an aggressive people, determined to subjugate the local tribes and impose their own systems of government, religion, industry and trade. In the course of the following six centuries the Iron Age way of life faded out as the inhabitants adopted the customs of their new masters, which led them through the worship of pagan gods to the eventual establishment of Christianity.

The Romans left behind them many relics of their occupation, perhaps the most notable of which are the Roman Theatre on the castle slope, currently closed to the public and undergoing considerable restoration, and the houses which have been excavated in the cloisters of the cathedral, where we ended our walk. Unlike the Romans, the next newcomers, mainly Visigoths, spread across Spain and then Portugal in a wave of emigrating peoples, looking for land to settle.

Many of these were Christians and they seem to have lived fairly peaceably with the Romanised population of Lisbon. The Visigoths left very few vestiges of their couple of hundred years stay in Lisbon but we know that as their civilisation declined they were unable to govern the territory satisfactorily and they actually invited Moorish people from North Africa to come into Portugal, the one condition being that they should allow the existing Christian and Jewish communities to continue practising their respective religions. So once again Lisbon was taken, not by assault but by the peaceful entry of a new race.

Our walk on this fine Saturday morning was led by Raquel, an extremely knowledgeable young archaeologist and partner in the firm “Time Travellers” and our intention was to see something of Moorish Lisbon. Amazingly, considering all the changes that have occurred down the centuries, those with “eyes to see” (or with Raquel to show them) can discover quite a lot. So we learned,  for example, that considerable stretches of the Moorish city walls still remain, some standing proud and free for everyone to see, others hidden by houses, some mediaeval, which were built against the walls; the walls stretch right down to river level and the row of buildings which incorporates the Casa dos Bicos all have stretches of the Moorish walls embedded in their foundations.

We learned, too, that the tortuous layout of the narrow streets, with their sharp corners and frequent flights of steps, was not a matter of chance or due to a lack of technical knowledge; these steep, narrow streets obeyed a deliberate plan intended to make any concentrated assault up the hill from river level a virtual impossibility. We learned, too, that the poeticallyinclined Moors loved their beautiful Lisbon; contemporary poetry often describes the town as a bride, all dressed in white, reclining on the hillside as if on her bridal bed.

The slope known as Alfama, which in Arabic means “hot baths”, is blessed with innumerable springs of fresh water, as well as many with high temperatures and medicinal qualities. The people of eastern Lisbon always had a spring of fresh water close to their homes whereas those who later settled in the dry western sectors had to go to fetch water or rely on door-to-door water sellers for their supplies.

The Moors kept their promise as far as the existing Christian and Jewish communities were concerned: they were allowed to practise their religion freely, and keep up their own places of worship, as long as they paid a special tax levied on them for this right. Many documents of the period paint a picture of a normally peaceful co-habitation and, to a certain point, integration of the various communities.

All this changed in 1147 with the arrival of D. Afonso Henriques and his motley army, partly men from his own “county” in Northern Portugal, partly crusaders from England, France, the Low Countries and the various German states whom D. Afonso Henriques convinced to fight Islam closer to home rather than travel all the way to the Holy Land. These Christian warriors subjected the castle at Lisbon to a long siege. There were some skirmishes outside the walls but little serious fighting. The English dug a tunnel under the walls at one stage and set off an explosion but this caused only minor damage to the masonry and resulted in the death of several Englishmen. In the end the Moorish Castle was once again taken by treaty rather than by assault but sadly this time things did not go so smoothly. Although D. Afonso Henriques had promised that the Moorish inhabitants would be allowed to leave peacefully he was not able to control all his variegated troops and much murder, rape and plunder did occur.

If you would like to know more about the services provided by Time Travellers please see www.timetravellers.pt