Where past and present meet

The adventure really started in the Rua Bempostinha - you know, the street of which the people of Lisbon say: A Bempostinha é amor. Nesta rua o passado e o futuro estao apaixonado. “This is really where my love of History and my love of Drawing became one,” says Margarida. “And this is where the 4D-Dinastias de Portugal project was born, sparked off by the mysterious nickname of Bempostinha given to D. Catarina of Bragança, the Portuguese Queen who married King Charles II of England. I felt that through my artistic renderings of historical characters, such as the Kings and Queens of Portugal, I could understand my own roots better and I could also help others, especially schoolchildren, to take pride in their own cultural heritage.” 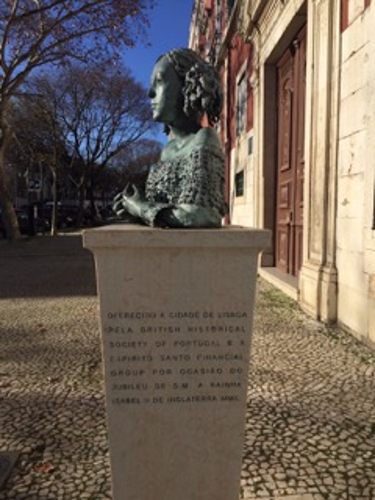 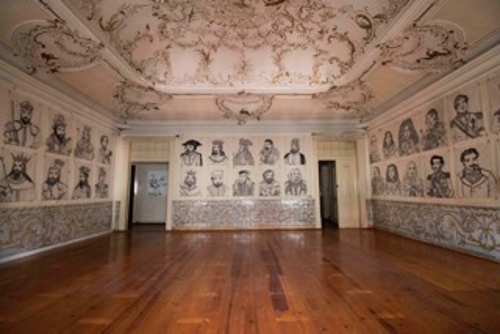 The 4D-Dinastias de Portugal project was accepted by the Junta de Freguesia de Misericórdia. The Espaço Santa Catarina was made available in 2017, invitations were sent out to schools and (here, her wonderful smile illuminates her features), she says with a giggle, “to the Monarchists of Portugal, those that could be reached by post or email.” “They came, they made comments, corrected a detail here and there and they enjoyed what I saw, they said. And I have never looked back.”

Another open-exhibition on the Kings and Queens of Portugal followed in 2019 in the Rua da Madalena, in an old Pálacio soon to be converted into a luxury hotel, where the BHS met up with Margarida. 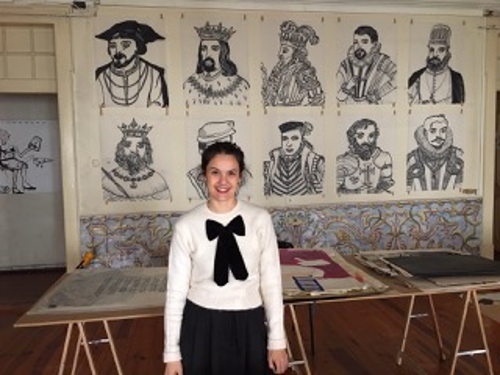 Margarida Alfacinha comes from an artistic background. Her mother is a well-known painter, her father was a writer and journalist: “Art – paints, canvasses, brushes, books - were everywhere in our home”. Maybe this explains why, after a gap-year at 17, Margarida decided to study at IADE, the Faculty of Design, Technology and Communication in Lisbon, focussing on costumes, illustrations, TV & Radio projects, and Education for Art - courses for children.

When asked what her next project will be, Margarida indicates that she has decided to do more portraits of the foreign men and women related to the Portuguese monarchy. More Posca pens and other contemporary materials will be used, more baroque motifs will be researched, studied and synthesised, resulting in more marrying of the formalism of the subject matter with the appropriation of the theme by a 21st century viewing public of all ages. “More people to get engaged in the project to extend its reach abroad,” she hopes.

Margarida knows that she will have to find funding from sponsors and get support from museum and library sources across Europe. Where will she start? Without a moment's hesitation she replies: “with the English Monarchy, because the links between the countries go back so far. Then I shall research the many marriages between Royalty of the European Courts.” “Children and even the University students that I tutor”, she explains, “get very excited about history when they realise, through these historical paintings, that we are as so many branches of a common family tree”.

Joking, I suggest that maybe she should also think about doing a series on Njinga (1582-1663), a real-life tribal Queen who fought the Portuguese slave-traders and colonisers in Africa. She smiles again, knowing that history is - and will go on being - an endless source of inspiration for her articulate portraits of famous Kings and Queens and an ongoing source of pleasure for those who view her eloquent paintings.