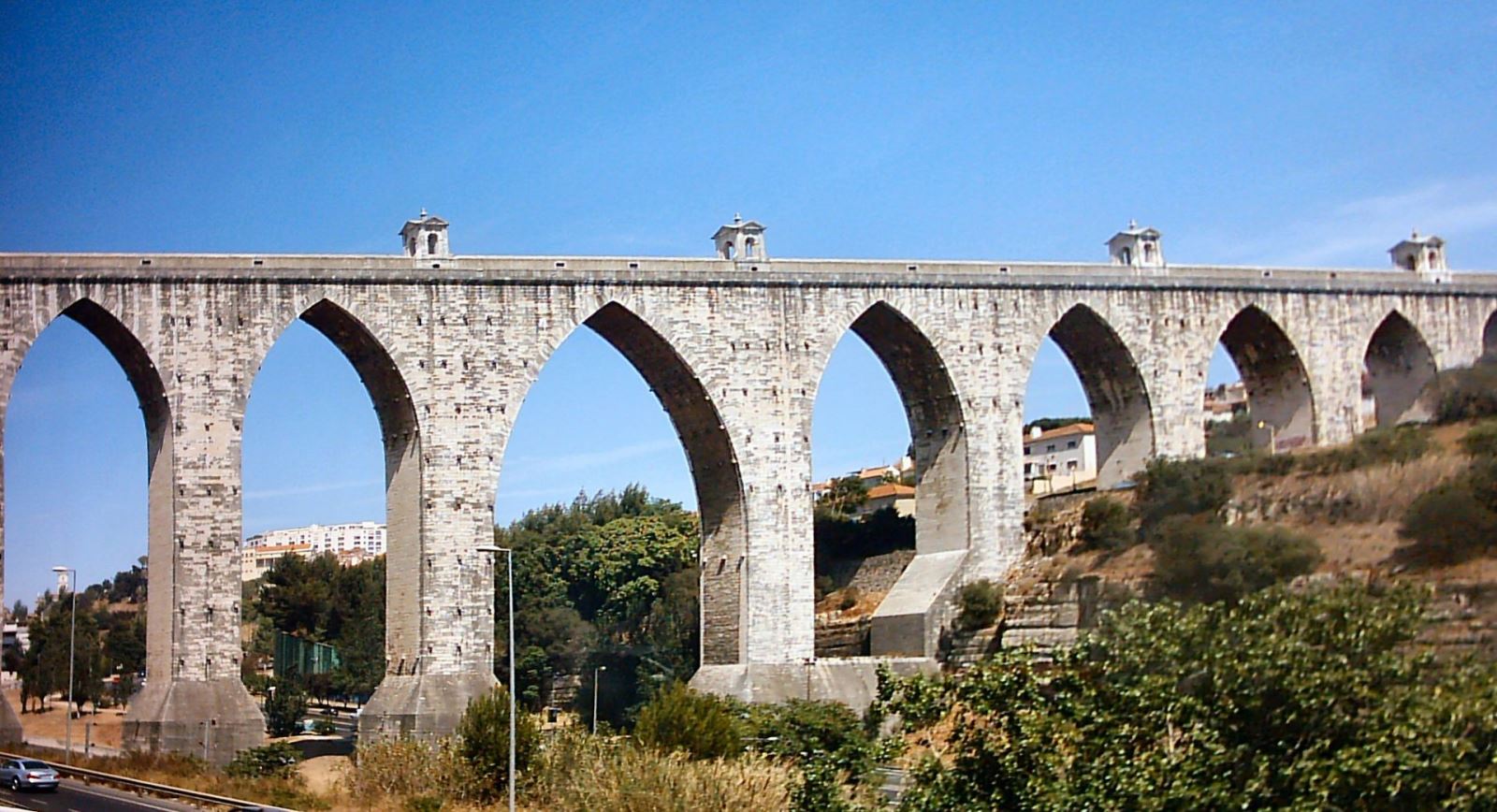 Following the heavy rain that caused the postponement of a planned visit on 30 October 2021, we were welcomed by a sunny, cloudless day when we met our guide, Barbara, at Campolide on 13 November.

Dom Joao V was the monarch of Portugal in the first half of the 18th century, and he was fortunate to have funds from the prosperous trade that Portugal enjoyed, mainly with Brazil. One of his priorities was to modernize western Lisbon, and he was much influenced by what was happening in Rome at this time. He realized that a key to development of this area was a plentiful supply of clean water, which would allow a comfortable life for his nobles and those that were expected to build their palaces. He even ordered that cost of any such modernization be at the expense of all Portuguese, rather than just Lisbon residents, because he said that all Portuguese needed a thriving capital.

The Italian architect, Antonio Canevari, designed the aqueduct, with foundations on solid rock. Iron strengthening was used as well, and we were shown some of the marks of different master stonemasons. These employed a myriad of assistants, with 1300 employed at one time. Construction started in 1731 and lasted until 1799. Water first flowed in 1748. The aqueduct was so well built that the 1755 earthquake hardly caused any damage.

The structure extends 941 metres across the Alcantara valley. There are thirty-eight lateral arches, and fourteen central ogival arches, of which the Arco Grande is the largest, with a width of 28.86 m and height of 65.29 m. The aqueduct gallery (for carrying the water) is 2.88 m tall, and its base has a pathway 66 cm wide. The pathway was used by staff to ensure constant water flow in the narrow open channels each side of the pathway, mainly by removing the calcinate deposits. The gallery design originates from Roman times and can be seen in ancient aqueducts built throughout Europe.

The aqueduct was part of a system that brought water from the Aguas Livres farm, Caneças, north of Queluz, to a reservoir in Amoreiras, which was a distance of 14 km. The secondary lines of supply extended to 44 km. Water flowed to the Mae d’Agua das Amoreiras Reservoir, which was built in 1748. From here the water was distributed to fountains, buildings and reservoirs, including the Patriarchal Reservoir under the Principe Real garden, visited previously by the Society when we were led through the gallery/tunnel to the Miradouro de San Pedro de Alcantara and garden. In that gallery could be seen the iron pipes that were introduced to the whole system in the mid-19th century, when water engineers decided that drinking water should not be running through open channels. Later, the whole system gradually became less important in the Lisbon water supply network, and it was deactivated in 1974.

Barbara led us along the busy streets of Amoreiras to the garden beside Mae d’Agua reservoir, where the aqueduct runs along some imposing arches. Enclosed in one of the arches is a chapel dedicated to Our Lady of Monserrat, which was used by the numerous silk workers in the area. The Casa da Agua is a national monument, with guidebooks saying its basin can hold 5500 cubic metres of water, although Barbara told us that the latest estimate is considerably less. The building design is that of a church with side aisles and places by the windows (conversadoras) where exchanges could take place. In addition to holding the impressive water tank reservoir, the building is now used for displays. At noon Barbara left us, and we climbed the stairs to the roof for a fabulous view of Lisbon, and the busy Rato down below.