Home  »  News  »  Commemorations of the loss of SS Roumania, one hundred and thirty years ago

Commemorations of the loss of SS Roumania, one hundred and thirty years ago 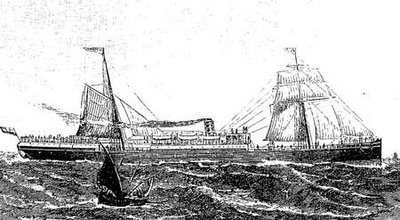 Many members of the Society will be aware that a tragic shipwreck took place on the coast north of Lisbon, near Foz de Arelho, in the early hours of 28 October 1892. The Society published an article on the tragedy in the 1985 Annual Report and Review and a large tablet on the north wall of St. George’s Church, Lisbon records the names of many who perished in the disaster, including a number of unnamed ayahs (Indian nursemaids or governesses) but with no reference to the 44 lascars (Indian stewards and seamen) who perished.

The Roumania was a 3387-ton, two-masted schooner, built with a steel hull and powered by steam engines, belonging to the Anchor Line, carrying passengers and cargo on a liner voyage from Glasgow, via Liverpool, to Bombay. There were 46 passengers aboard the ship, including three children and five infants, as well as 18 European crew members and 50 Indian seamen and stewards.

Having rounded Cape Finisterre in northern Spain, the ship encountered a strong gale and very poor visibility, thus making impossible the sighting of shore beacons such as those on the Berlengas Islands and Cabo Carvoeiro. Unfortunately, the ship, instead of keeping west of the Berlengas and thus far away from the Portuguese coast, was sailing in the channel between the Berlengas and the coast. At a late hour on the evening of 27 October, the ship struck a sandbank just south of Foz de Arelho and tragedy unfolded.

133 persons died in the disaster and only two British officers in the Indian Army and seven Indian members of the crew survived. A few bodies were washed ashore and buried in local cemeteries such as Peniche and Serra de Bouro.

A particularly unfortunate aspect of the tragedy was widespread plundering by local inhabitants of items of cargo and personal effects washed up on the beaches. Local troops and the Guarda Fiscal were called out to try to stop the plunder and recover looted goods, but usually to little effect. Such articles have been passed down through generations and some items such as chintz, a petrol lantern and a silver spoon were on display during lunch. 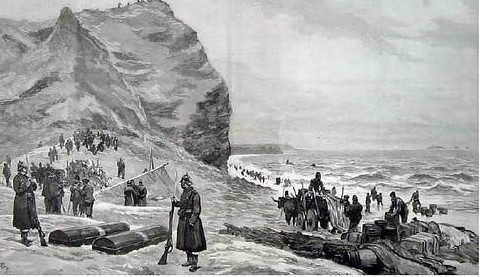 On the morning of Sunday 6 November 2022, several Portuguese and British residents gathered by the few graves at the Serra de Bouro cemetery for a memorial service presided over by a local Roman Catholic priest. Three members of the British Historical Society had travelled up from Lisbon and the British Embassy was represented by the Consul, Mrs. Simona Demuro, who unveiled a plaque commemorating the 130th anniversary in front of the graves.

Afterwards 190 people attended a lunch in a local community hall and a film was shown made by two residents who dived on the remains of a ship in the sands off Foz do Arelho on 1 January 2019. At the time they believed they were diving on the Roumania but later research confirmed that the wreck was that of an Italian vessel, the Domingo, which was shipwrecked in 1923. In fact, in 1963 the appropriate authorities had authorized a company to dynamite the hull of the Roumania and recover much of its cargo, which included rails, a dismantled steam locomotive and sewing machines. Unfortunately, the historic value of these items was not recognized at the time and so it appears that no detailed records of items recovered were kept.

Malcolm Burrell, a local resident and investigator, spoke of his research into the tragedy, noting that it was relatively easy to obtain information about many of the passengers, such as missionaries, army officers and civil servants serving the Raj, due to their social situation and obituaries. As common at the time, the ship’s superstructure was made of wood, which rapidly disintegrated due to the force of the waves once the ship had run aground. The ship’s bridge was open with canvas sides, which were also soon destroyed by the force of the waves. The ship carried cork lifejackets but instead of being readily available in the passenger cabins, they had been placed in the hold as passengers preferred the space in their cabins to be occupied by their baggage.

In conclusion, the president of the Câmara of Caldas da Rainha, Victor Marques, and the “vereadora da Cultura” Conceição Henriques, emphasised that the tragedy had at least its good side in that it had brought about a close relationship between the Portuguese and British communities in homage to the victims of the disaster.