Something for everyone in a remote part of Portugal

Early in October an 18-strong party from the British Historical Society of Portugal spent four days in the Beira Interior – that part of Portugal which is way over on the north-eastern border with Spain – and met outstandingly friendly, interesting, generous people wherever we went.  First there was D.Beatriz in the little town of Freineda, known to our driver but not to us, a beautiful country woman of a certain age who knew where to go to find the guardian of Wellington’s headquarters and generously left her mid-morning housework to take us there.

And there was our guide in the wonderful star-shaped fortress town of Almeida, a vivacious young woman who would have been at home on a Lisbon catwalk, yet proved to be tremendously knowledgeable on 19th century military matters.  Then again there was Manuel, an enterprising Portuguese who runs a busy restaurant across the border in Fuentes de Oñoro rejoicing in the name of “El Frango”! 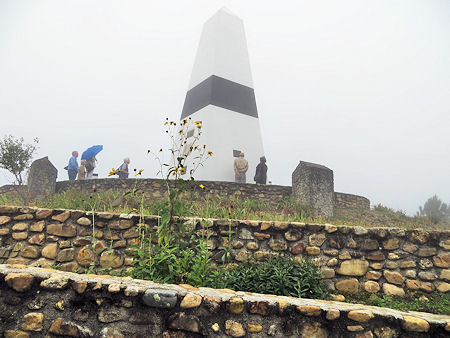 In Spain we were shown the battlements, ravelins and parade ground of the ruined fort of La Concepción, now a fine hotel, by a charming young woman from Galicia dressed in the uniform of a 19th century Spanish infantryman and in the afternoon we met up with three ladies from the Province of Salamanca, Susana, Raquel and Estér, who took us to the once splendid but now ruined monastery of Nuestra Señora de la Caridad in Ciudad Rodrigo to meet yet another of our fabulous new friends, a man this time, of a certain age – a gentle, humble yet confident man in a violently purple sweater who told us about the time when the French general, Marshal Massena, had his headquarters in the monastery. Back on the border we met yet another splendid person – the parish priest of Fuentes de Oñoro, who covers three parishes and chats in German as fluently as in his native Spanish.

The main purpose of our journey was to learn a little more about the complex history of the Peninsular War which raged backwards and forwards across almost the whole of Portugal between 1807 and 1811, devastating the country but ultimately freeing it from the threat of French domination.  For those of us for whom the Duke of Wellington is one of our long-time heroes, the visit to his winter headquarters in Freineda was satisfyingly evocative.  With storerooms below and an outdoor staircase leading us into the living quarters of what must have been the finest house in town in those less demanding days, we found ourselves in the great man’s dining room, a fairly large and beautifully kept room with a typical Portuguese coffered ceiling and wonderfully well polished floorboards.  Here we saw a small collection of military memorabilia, the personal collection of the owner of the house, and we were also shown the little room where Wellington set up his simple camp bed and the chapel which forms an integral part of the building. 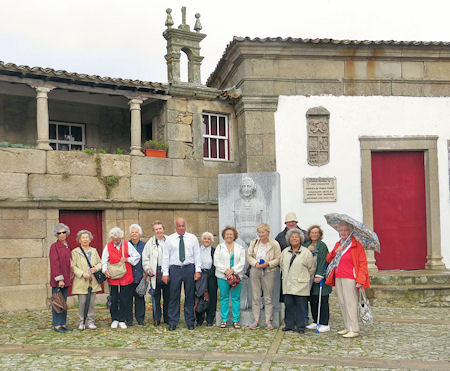 For the real military buffs the highlights of the journey must have been the 17th century -shaped fortress town of Almeida and the corresponding Spanish Real Fuerte de la Concepción.

For others, culinary matters were the most important aspect of the trip, starting with a delicious Veal (rather than Beef) Wellington at the nationally famous Restaurante Ponte Velha in Sertã and continuing with a splendid arroz de marisco made for us by the Restaurante El Frango in Fuentes de Oñoro and a fine Spanish lunch at the Real Fuerte de la Concepción, this last preceded by a glass of dry sherry which had to be hunted down in a store cupboard in this northern province which practically ignores the existence of worthwhile wines from as far south as Jerez de la Frontera.

But for many people THE meal of the journey was the grilled chicken eaten at makeshift tables under a very effective tarpaulin shelter in the market square in Almeida with the rain teeming down all around and a mother-father-daughter set-up doing everything possible to ensure their customers were dry, happy and well fed. 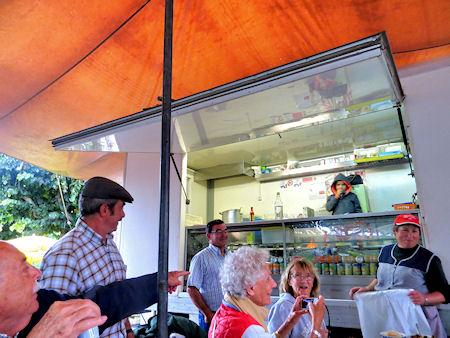 Lunch in Almeida – safe and dry despite the rain

This was a journey of constant surprises:  amongst many others, the disappointing mist which hid the geodesic centre of Portugal, where we had been promised a 100 km x 360º view of our surroundings, but lifted to show us a fascinating little museum in nearby Vila de Rei dedicated to the story of fire and resin which dominate the history of this part of the country, shown to us by a willing and fluent guide from Eastern Europe;  the key to Wellington’s HQ in Freineda which was not immediately available but was found through the good offices of our faithful bus driver, who had been there before;  the three ladies from Fuentes de Oñoro who although not official guides had a tremendous knowledge of the various conflicts in the area through their membership of a re-enactment group; and perhaps above all, the make-up of our own group: eighteen people from the most varied backgrounds imaginable, each with something different and interesting to contribute. 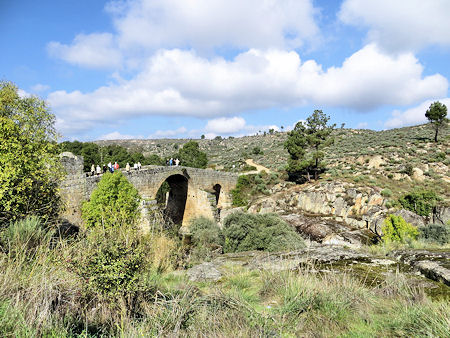 The only drawback to our adventure was the fairly constant rain which followed us around for the first two days but this did not dampen the spirits of our cheerful and always interested group. On the third day the rain lightened and in the course of our journey back to Lisbon on the final day the sun came out and gave us one further treat:  a visit to a fortified mediaeval bridge over the River Côa, the Ponte de Sequeiros, set in wonderfully unspoiled, almost idyllic, countryside close to Sabugal – another town which played its part in the Peninsular War.

Our guide that morning, Dr. Jorge, told us that the exact age of the bridge is disputed but it is certainly ancient and very evocative.  On the subject of the castle at Sabugal he was able to be far more precise, dating it from the time when firearms were just beginning to come into use.  Its most unusual feature is that its keep, instead of being square or round, is five-sided, so that the castle is often known as the Castelo das Cinco Quinas. 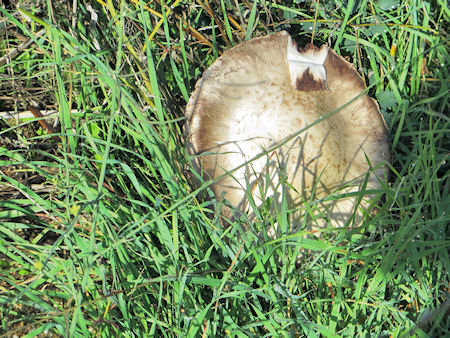 Our home for three nights was the warmly friendly 4-star Hotel Lusitano in Vilar Formoso  (contacto: hotelusitano@sapo.pt), unpretentious but more than adequate with spacious bedrooms and a small but ever-willing staff led by a graciously efficient hostess, D.Alexandre Marques. This is traditional Portuguese hotel-keeping at its best and is certainly a place to keep in mind when travelling to the area.