On Saturday, 10th March, 25 Members of the British Historical Society of Portugal visited Monserrate in Sintra to view the “Monserrate Revisited” exhibition to commemorate the 200th anniversary of the birth of Sir Francis Cook (1817-1901). Fortunately the weather held out and we were able to have a guided tour of the beautiful gardens, led by two key figures of their restoration- Gerald Luckhurst and Emma Gilbert. 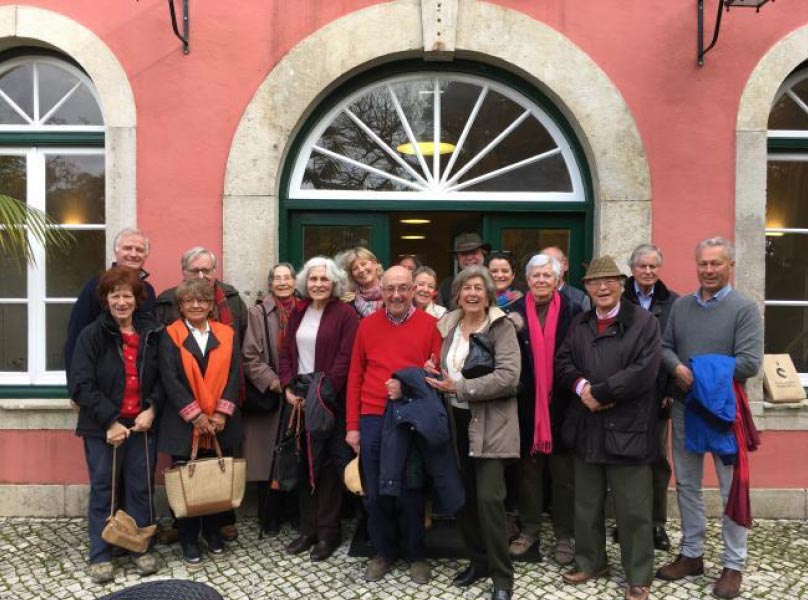 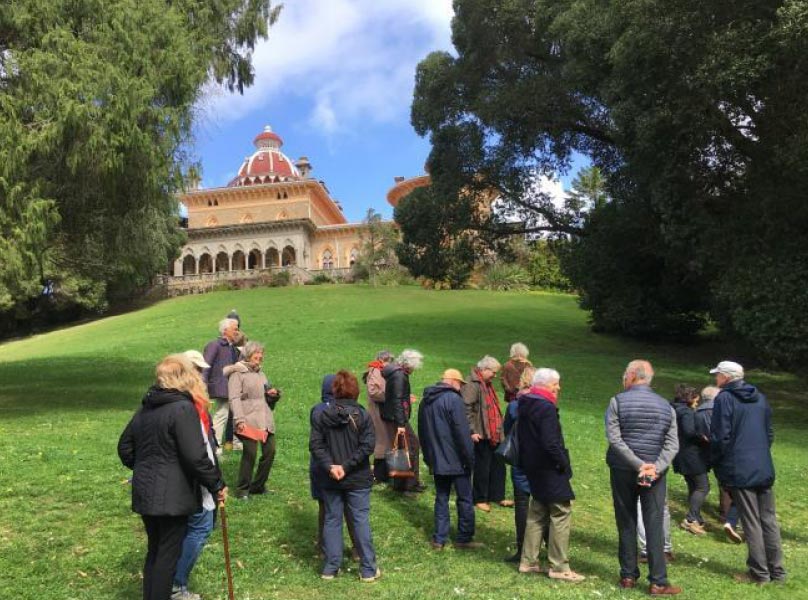 Sir Francis’s descendant sold the property to a Portuguese businessman, Saul Saragga, in 1946, who sold it on to the Portuguese State in 1949. It then fell into complete ruin during nearly 50 years of total abandonment. 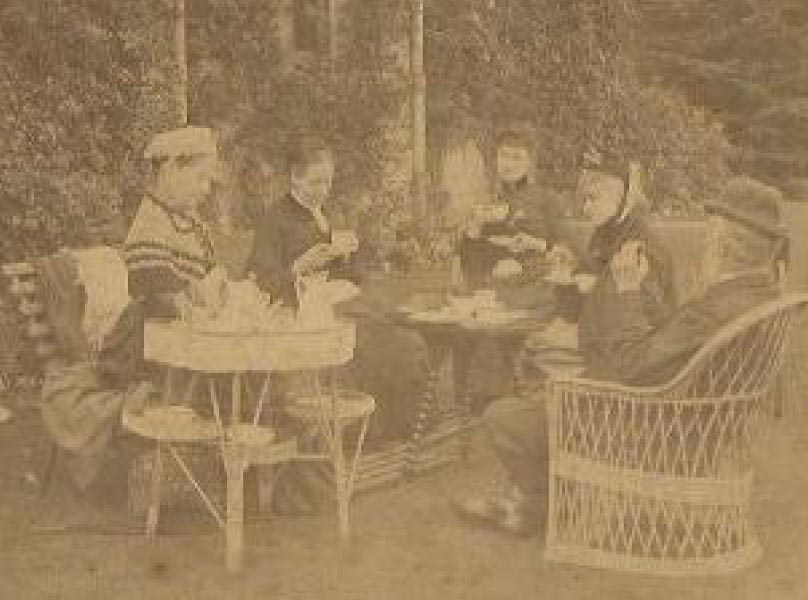 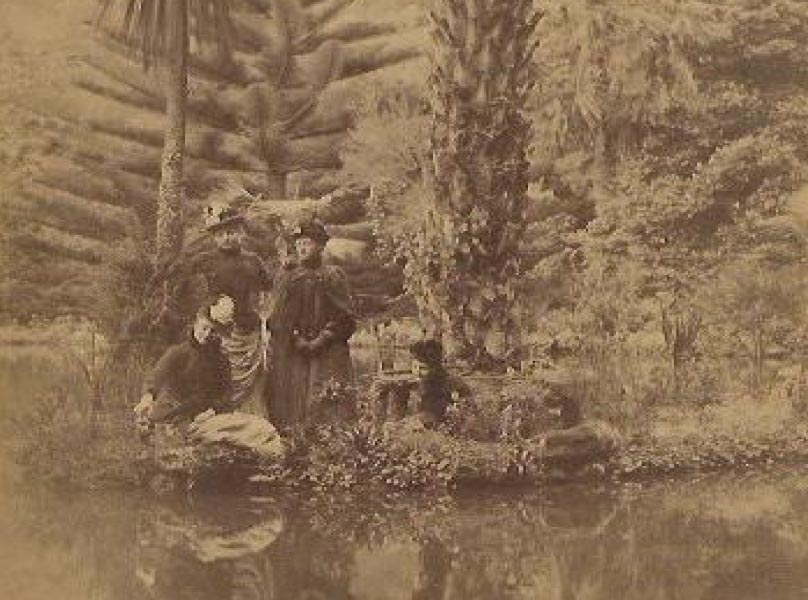 In the left-hand photo above, the second person on the right is Ethelinda Custance, daughter of Thomas Custance, who settled in Portugal after Waterloo. In the other photo, the lady sitting down is Edith Perestrelo, née Shaw, Ethelinda’s daughter. Their many descendants include the Dawsons, Stilwells, Croft de Moura, Sellers, and Gilberts.

Two English-speaking guides talked us through the exhibition which Parques de Sintra Monte da Lua had managed to assemble from the loan of many pieces of the original art collection of Sir Francis Cook. This was the first time that these exquisite pieces of art had returned to their former home since they were sold at auction by Saragga in 1946. We saw the famous ‘triptico’ by Grão Vasco, as well as copies of bronze statutes from the Louvre and also of Greek statues, as well as Sir Francis Cook’s original massive desk. 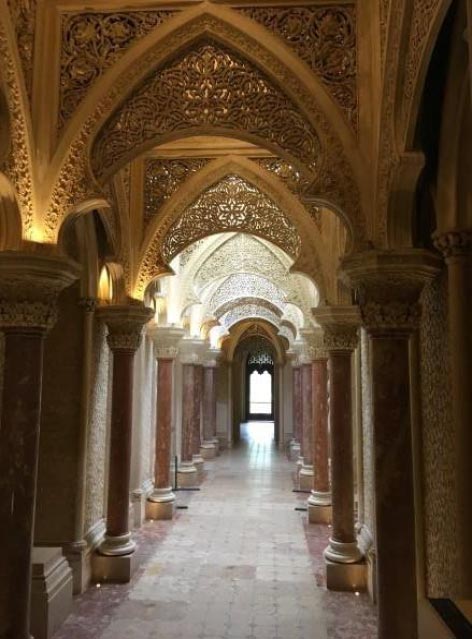 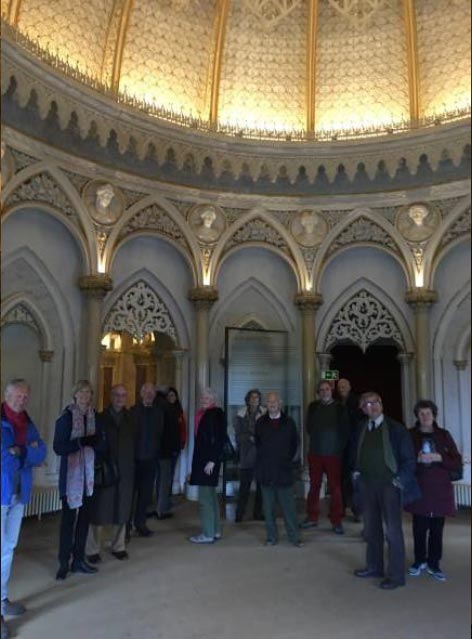 After the visit to the Palace, we were taken around the gardens by Gerald Luckhurst, the renowned landscape architect, who has been involved with their restoration since 1989. He showed us the folly, in the form of a ruined chapel built by de Visme in 1790, that serves as a reminder of how the NeoGothic castle on the hilltop would have looked. Gerald described how most areas of the garden had become completely overgrown, but have now been cleared, revealing hidden waterfalls and ponds and it was uplifting to see them in full spate after the recent rains.

We were shown the New Zealand ferns valley and the Mexican garden, with its giant Montezuma tree and cacti, and also the imposing 47m Norfolk Island Pine, the 35m Australian Araucaria, which produces giant cones, and the Queensland Kaori, which is the widest for its species in the world. 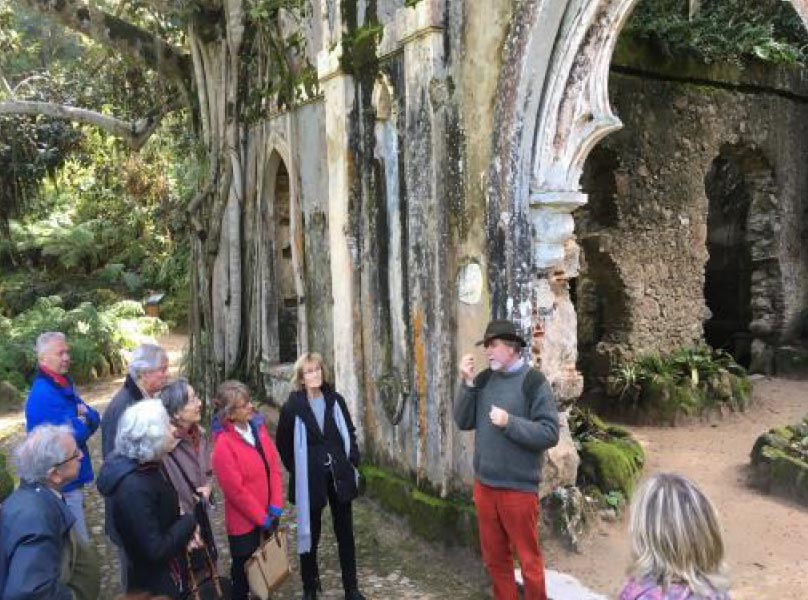 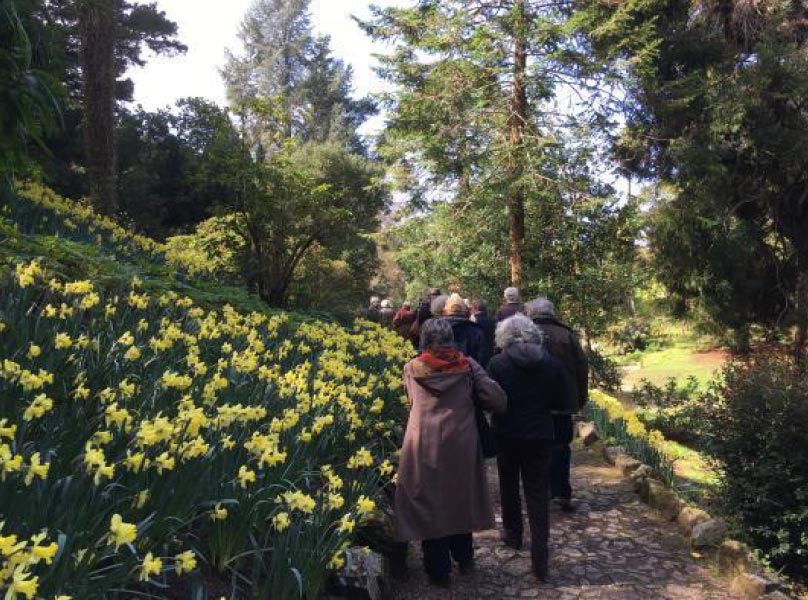 A more English sight was the first lawn to be planted in Portugal, which stretches magnificently down the slopes towards the lakes, decorated by daffodils in full bloom. 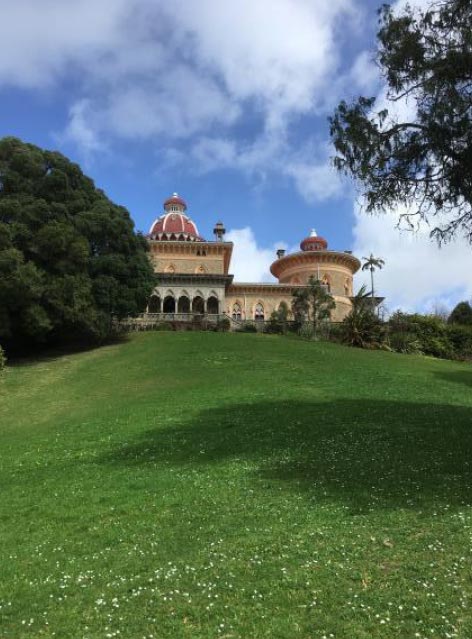 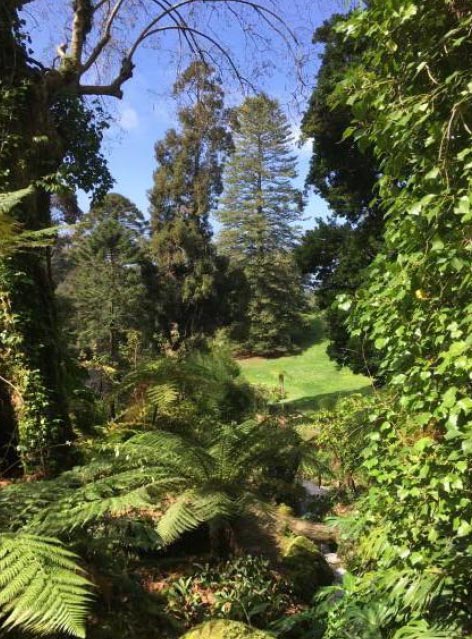 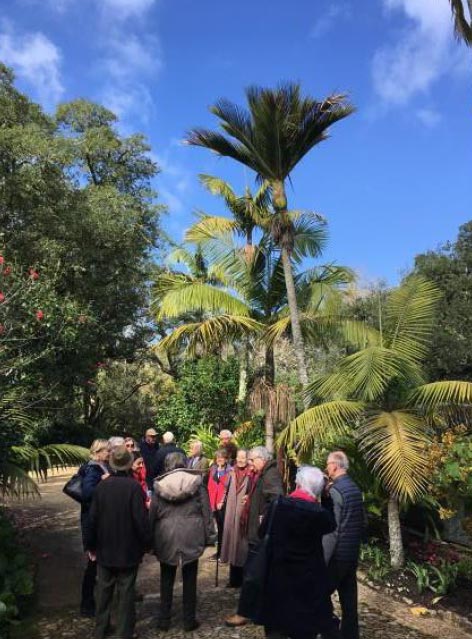 We then stopped for lunch in the privacy of the “Sala das Colunas”, which had been reserved especially for us. After lunch, Emma Gilbert spoke and related her childhood memories of Monserrate, and recounted seeing who could roll furthest down the massive lawn! She came under Monserrate’s spell later in life, when she was invited by the then British Ambassador, Hugh Arbuthnott, to head up the ‘Friends of Monserrate’ in 1992. To people’s astonishment she rolled down the lawn, forgetting she was fifty and not five! Yes, Monserrate had taken over her life, and much of the credit for the painstaking, and often frustrating years of its restoration must go to the ‘Friends of Monserrate’, among many other volunteers, including President Jorge Sampaio! 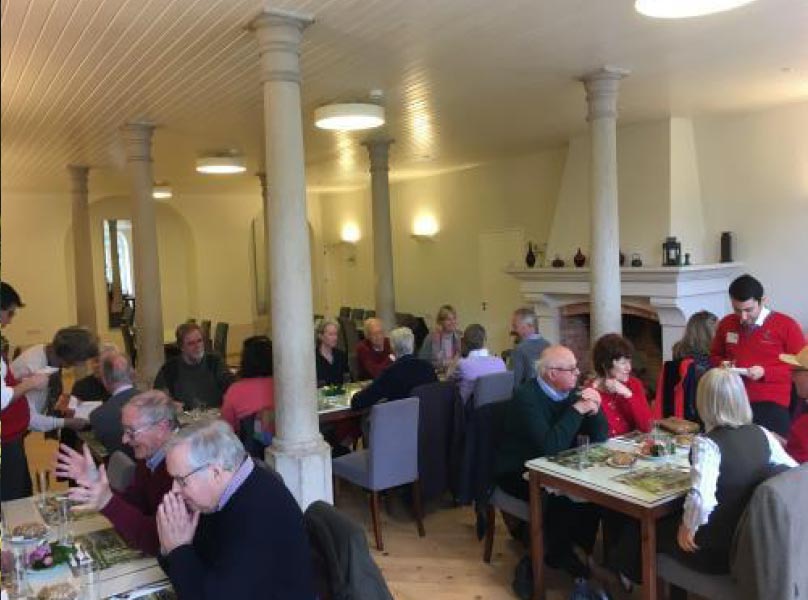 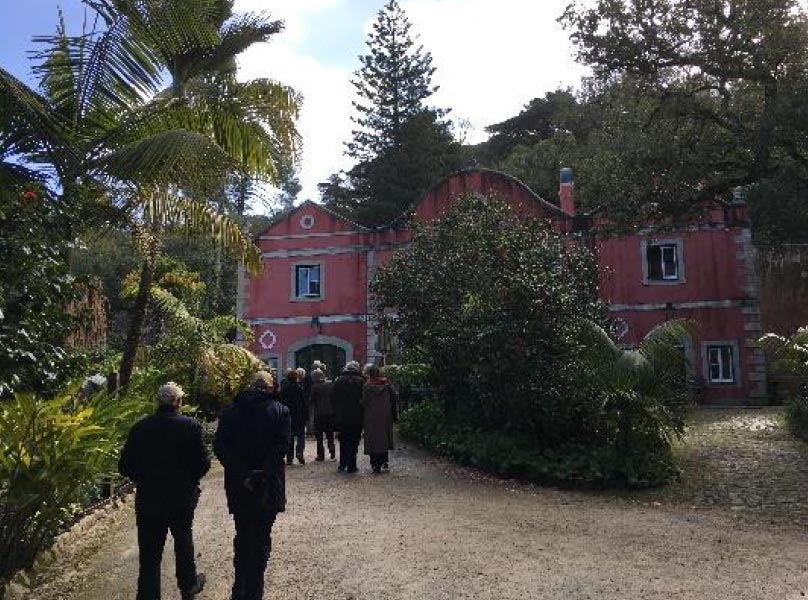 Some five years after Parques de Sintra Monte da Lua was created in 2000, the restoration of both the gardens and the palace took on a new lease of life. More and more visitors come and enjoy the “soft peace” and lushness of Monserrate. Emma’s dream is that like bygone days, music will again permeate the house, and to this end she lent her Steinway piano, and every third Sunday of the month music emanates from the music room, just as it did 150 years’ ago. Tears came to Emma and Gerald’s eyes as they concluded their emotional rollercoaster tale of their devotion to Monserrate, which is a magical place that leaves a mark on anyone who takes an interest in it, as witnessed by the writings of Byron, H. C. Andersen, and Bocage, to name but a few.