When planning a 4-day trip to a more distant part of the country the British Historical Society of Portugal selects a hotel, plans visits to some interesting places and puts in a - usually successful - petition for fine weather. So it was a shock when the 22 members of the Society who left the Lisbon area on a beautiful October morning suddenly found themselves smothered in a low-lying cloud. The mist continued for some 10 or 15 minutes before finally lifting to reveal a clear blue sky which stayed with us throughout our journey.

And what a journey – We travelled back some twenty thousand or more years to a period when our ancient ancestors of the Palaeolithic Age hunted huge animals and gathered fruit and roots, living in the shelter of steep rocks in fertile river valleys. To break ourselves in gradually we first travelled north to Santiago da Guarda, not far from Pombal, where vestiges of successive generations awaited us, dating from Roman, Mediaeval and Renaissance times.

The striking mediaeval tower of the Residencia Senhorial dos Condes de Castelo Melhor (PHONE: 236 672 025; www.cm-ansião.pt OPEN:TUESDAY TO SUNDAY 9H30-13H00; 14H30-18H00. CLOSED MONDAY) stands right in the centre of the little town of Santiago da Guarda and its resident guide, Claudia, is one of those great enthusiasts who helps you to understand the wonders of a building thought to be of mediaeval and renaissance origin which proved, upon investigation, to contain some of the finest and most extensive late Roman mosaics in the area.

This promising start to our journey was followed by an excellent picanha lunch at the Restaurante Caracol in the neighbouring village of Varzea before we continued our long journey north-east to our hotel in Fornos de Algodres, built on a hilltop with stunning views towards the Serra da Estrela. 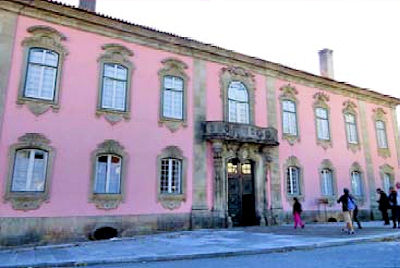 The following morning brought a real treat: a visit to a great mansion in nearby Mangualde, the Palace of the Counts of Anadia. This is an imposing house set close to the road with extensive grounds behind it.  The entrance hall, fine stone staircase and main reception rooms have remained largely unchanged since they were built in the 18th century (to such an extent that some of the main rooms have no electricity laid on). The tiles lining the walls of the staircase and reception rooms also date from the 18th century and are stupendous, mostly of Italian inspiration but manufactured in Coimbra and brought up to Mangualde by boat.

One particularly fine set, “The world inside out” is based on Oudry’s engravings for La Fontaine’s fables. On the lower floor the rooms are more intimate and Victorian in style and include a cosy billiard room and accommodation for a priest. The tiny chapel is at ground level, below the priest’s rooms and has a door onto the road outside. Any reader travelling in the vicinity of Mangualde would find a visit to the Palace of the Counts of Anadia well worth while. The house is open to visitors six days a week from 14.00 to 18.00 hours. For Sunday visits an advance phone call to check on availability is essential (+351 232 622 366) and indeed on any day of the week it might be wise to call in advance.

Later that day we drove out of Mangualde and in preparation for our visit to the Palaeolithic world stopped on the road and walked 200 m. down a good path to see a well-preserved dolmen (Anta de Cunha Baixa) erected a mere 5,000 years ago in a pastoral setting close to a friendly river. 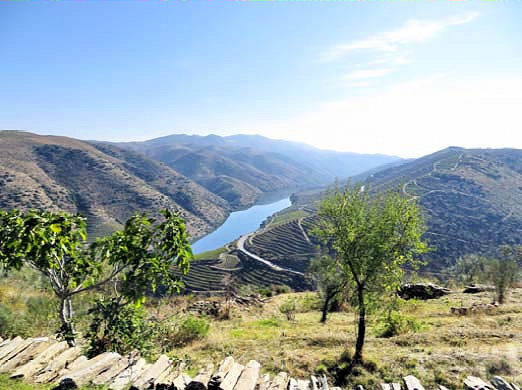 Next day we came to the highlight of our journey, leaving the hotel in the early morning to drive some 100 kms north to the small town of Vila Nova de Foz Côa with its starkly modern museum standing high on a promontory above the confluence of the Rivers Douro and Côa. The first and overwhelming impression is of the surrounding vineyards, those wonderful terraced slopes covering the river banks and neighbouring hills, their vines planted on sinuous horizontal terraces or in parallel rows plunging down the hillsides to river level. Most readers will have been to the Douro at some time or another – If you have not, please put it in your diary and plan a visit as soon as you can. Pictures can never do it justice – it’s an experience not to be missed.

The main entrance to the museum building is down a long narrow slope bringing to mind the fissures left by the shift of tectonic plates which created the deep valley of the Côa and the chaotic landscape of the Upper Douro. The pleasant and very knowledgeable English-speaking guide who showed us the museum helped us to understand the latest theories about the lives of our early ancestors some 10,000 to 30,000 years ago.

Some of us learned for the first time the expression “Before the Present” or “BP”, a term used by archaeologists to classify the period from the beginning of time up to the mid-20th century. We also learned that, contrary to common perception, our early ancestors were not small people, indeed they were possibly almost 2 m. tall, and they did NOT live in caves, which we were told would have been cold, unhealthy and generally unpleasant. Instead they lived in wigwam-style tents made of animal skins, often standing in the shelter of a cliff face.

That afternoon we were taken in the Museum’s 4- wheel drive vehicles on a bumpy ride over a rough switchback of a track down to water level in the Côa valley. What a paradisiacal spot! The river bubbled past on our right, sparkling and lively, bordered by a wide stretch of what can best be described as greensward, as fresh and uncluttered as must paradise have been. On our left the rock walls of the valley rose up, with every here and there outbursts of line drawings carved into the upright rocks by Palaeolithic Man using the tools we had seen in the museum, flints, quartz and other hard stones. Many questions arose: Why were some rocks smothered in carvings whilst others right beside them were left blank? Why did they smother those particular rocks in superimposed drawings? Why did they only draw large animals (horses, goats, bulls) all shown life-size, with only the occasional fish? Why are there no human figures?

It is essential to book in advance for a visit to any one of the three main archaeological sites, which can only be seen by travelling in the museum’s vehicles and under the leadership of their driver-guides. Contacts are the same as for the museum. After Foz Côa any other historical visit might have been an anticlimax but on the following morning we went to see the Queijaria Basílio (PHONE: 271- 709-717; to_manuel_almeida@hotmail.com) where D. Fernandinha, a great cheese-maker, welcomed us to her production unit in the village of Pinheiro de Tavares. It’s a simple place, almost terrifyingly spick and span, and the cheese produced there is excellent. Another “first” for many of us: never before had we seen the finely chopped purple thistle flowers which are one of the essential ingredients of the queijo da serra. A few members wandered out to look around the village and were rewarded with a great bonus: they found a 2nd century Roman burial stone now enjoying a useful second career as the windowsill of a neighbouring house.

One last visit completed our journey: a short stop in the town of Cabanas de Viriato to see the former home of Dr. Aristides de Sousa Mendes, the Portuguese Consul in Bordeaux who saved so many lives by issuing Portuguese visas to tens of thousands of people fleeing occupied France early in WWII. The house, sadly, is falling into ruin, with the roof caving in and the blue sky visible through the upstairs window spaces. A desolate end for a once impressive family mansion.