Home  »  Events  »   Report on the tours of the British Cemetery

Report on the tours of the British Cemetery

The first event to be held after the relaxation of Covid regulations was when our Chairman, Edward Godfrey, gave two tours of the British Cemetery in Lisbon on a sunny day in June. These proved to be a great success and both lasted longer than the programmed time, as members of the groups contributed with anecdotes associated with occupants of the cemetery and we went deeply into the history of the families buried there, as well as the events leading to the deaths of some of the 34 members of the armed forces buried in the Commonwealth War Graves sections of the cemetery. 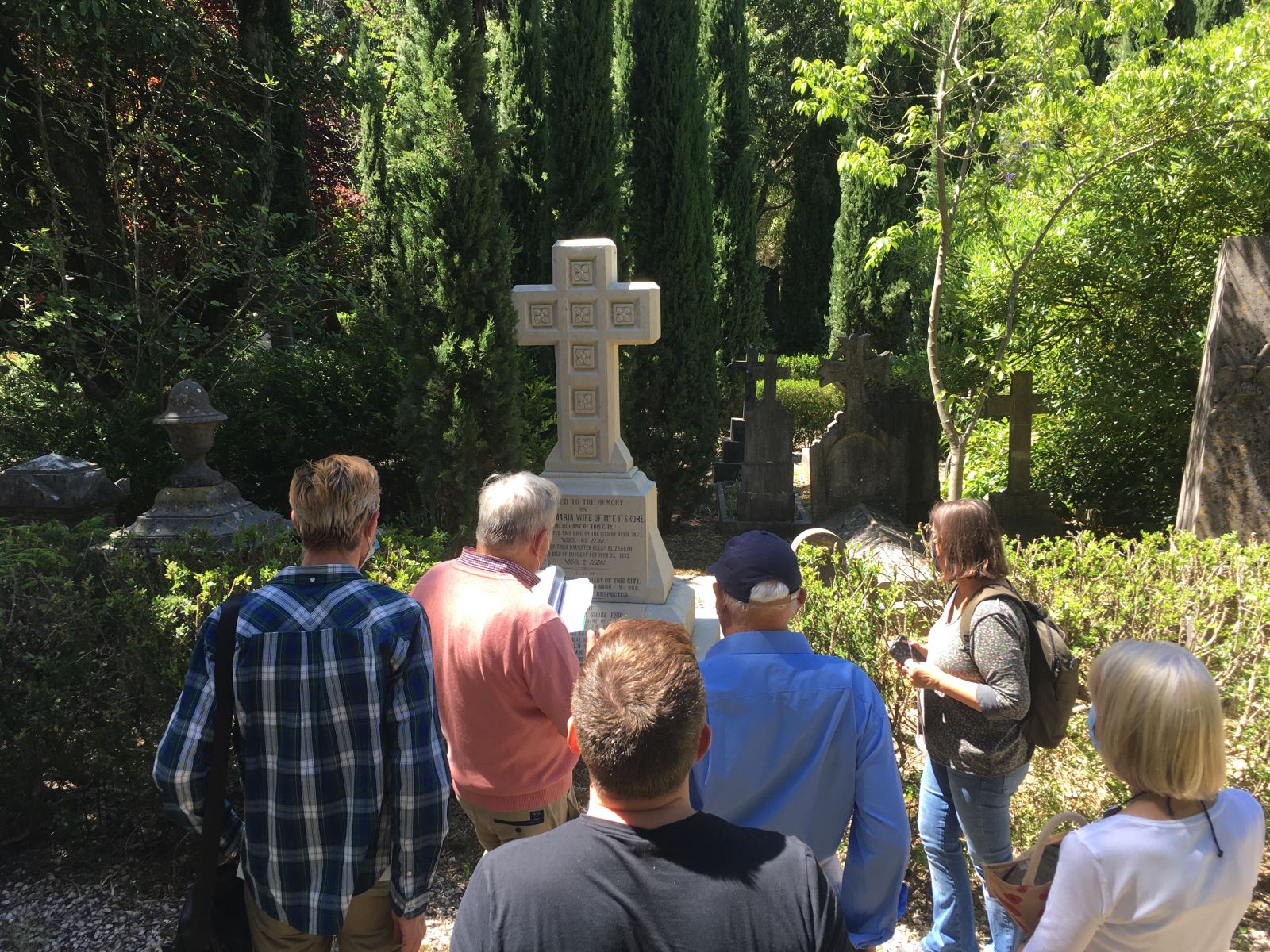 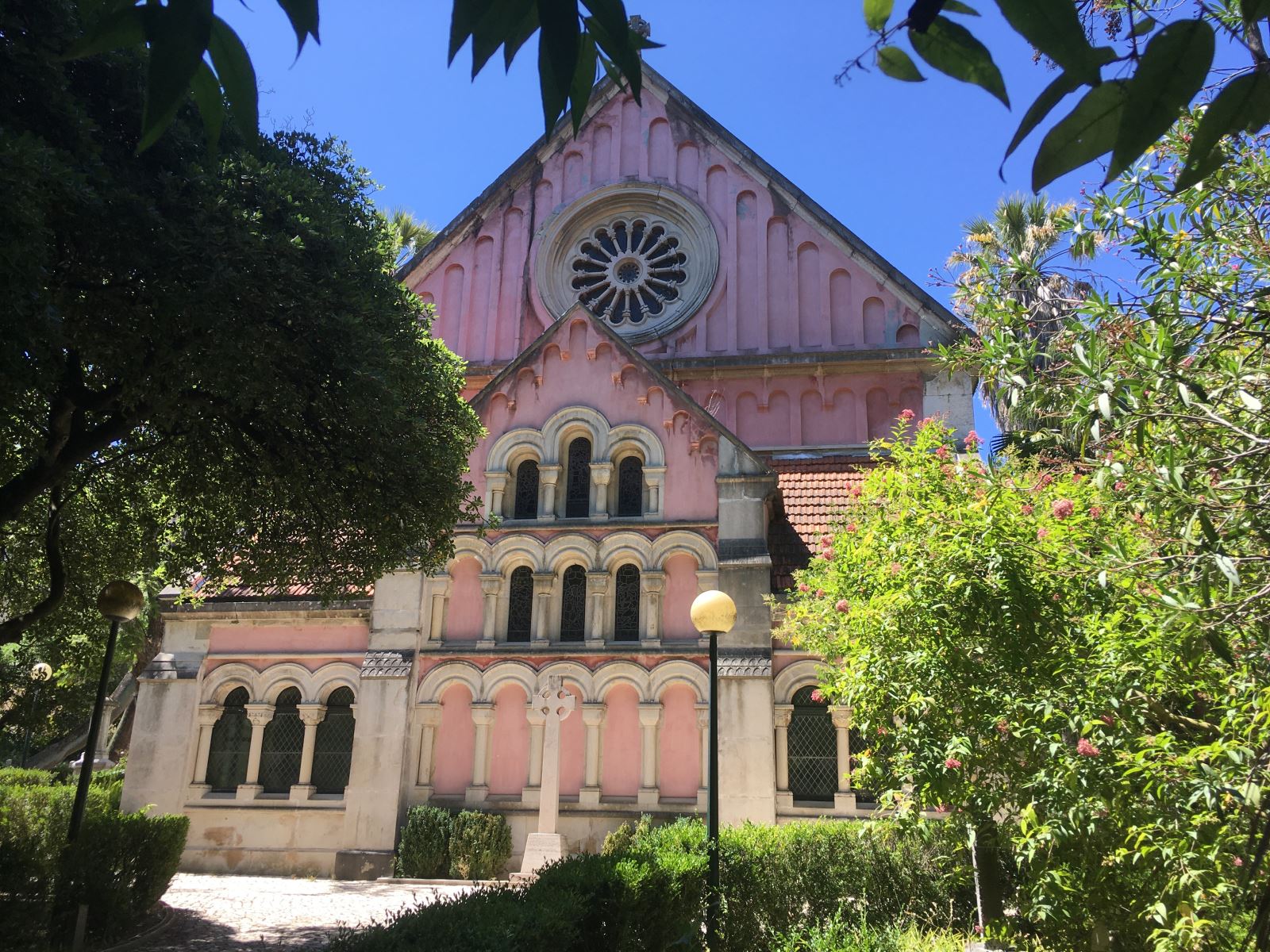 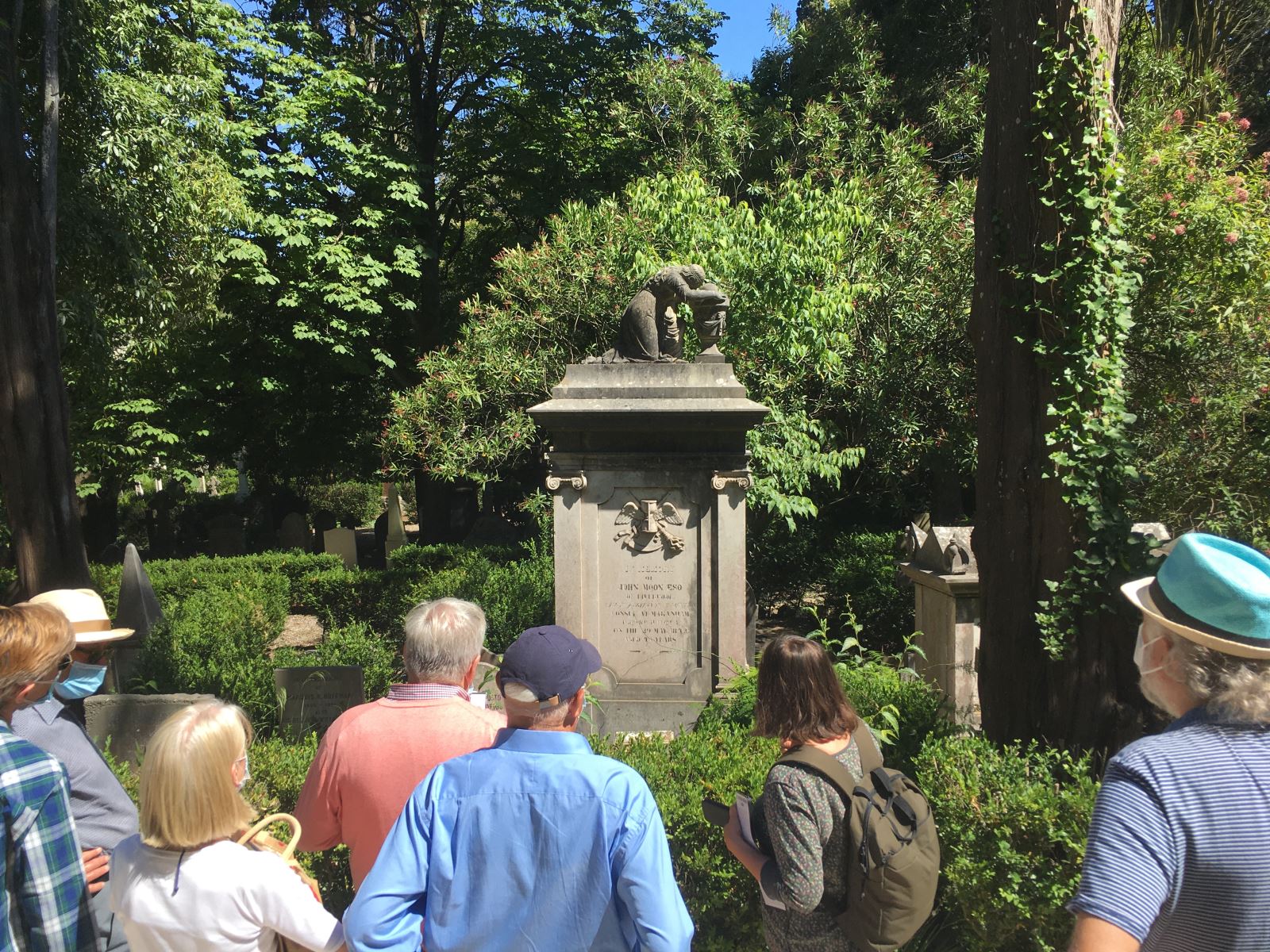 Under the 1654 Treaty negotiated between Oliver Cromwell and King João IV, the British in the Lisbon area were granted a plot of land for the burial of their dead. However, with opposition from the Inquisition, nothing happened until 1717, when the British Consul Poyntz was able to lease suitable land. The Dutch acquired an adjacent plot in 1723 and the two nationalities combined to expand the area in 1729/1734. The British purchased a further piece of adjacent land in 1810 for military burials, and it was at this time that the entire site passed into British control. The area of the cemetery then remained unchanged until the 1950s when land was expropriated for road building, which meant that some graves had to be moved. The cemetery was originally surrounded by trees, mainly cypress, as the Inquisition wanted to “hide the graves of the heretics from the eyes of the faithful”. Although now surrounded by roads and buildings, it remains a small oasis in the heart of Portugal’s capital, which is open to the public on weekday mornings and on Sunday mornings, when services are held at St. George’s Church. 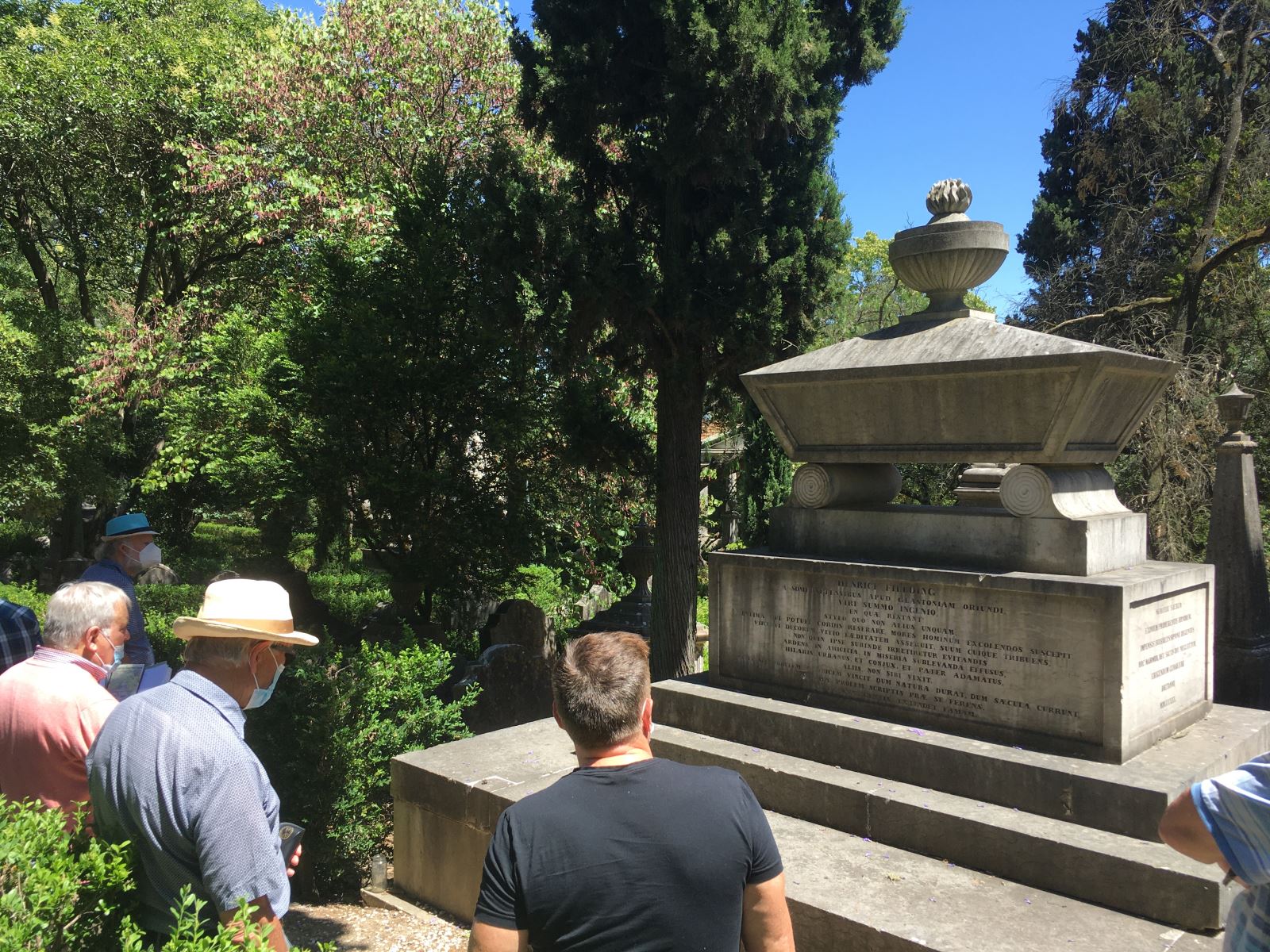 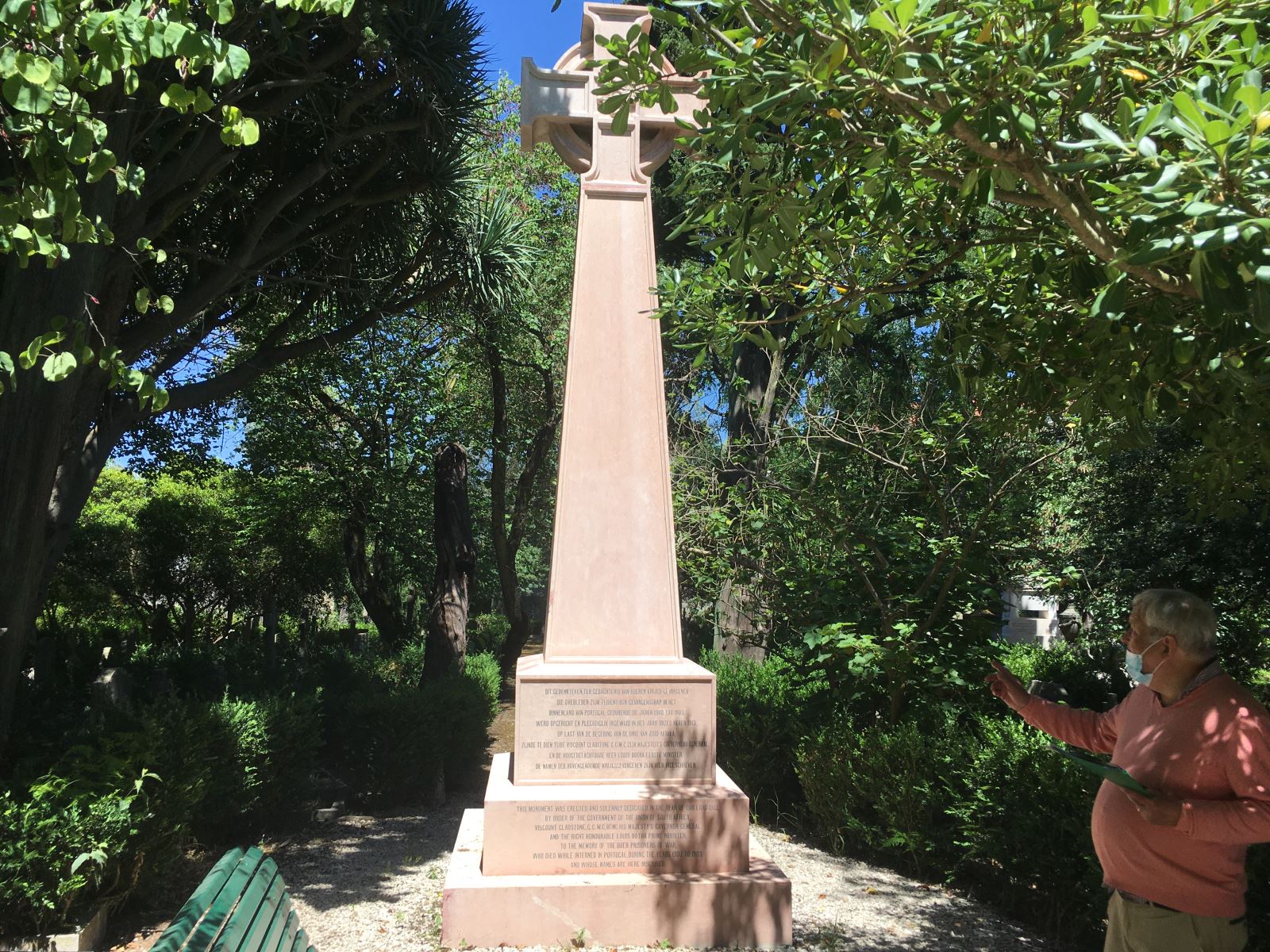 Memorial to the Boer Prisoners of War

Having distributed an excellent brochure, prepared by Carol Rankin and himself (which is on sale at the main gate), Edward Godfrey led us around the paths to seek out some of the more interesting graves. Of course, most people know that Henry Fielding, author of Tom Jones, is buried there, although it was interesting to find out that his remains are not in the imposing tomb we saw, but somewhere else in the plot. Another notable name is that of Philip Doddridge, a non-conformist minister and writer of hymns who came to Portugal for his health but unfortunately succumbed to his illness, just as Fielding did while he was in Lisbon. Edward Godfrey pointed out that several of the graves show examples of designs that illustrated the career of the deceased, which led to an animated discussion in both groups. 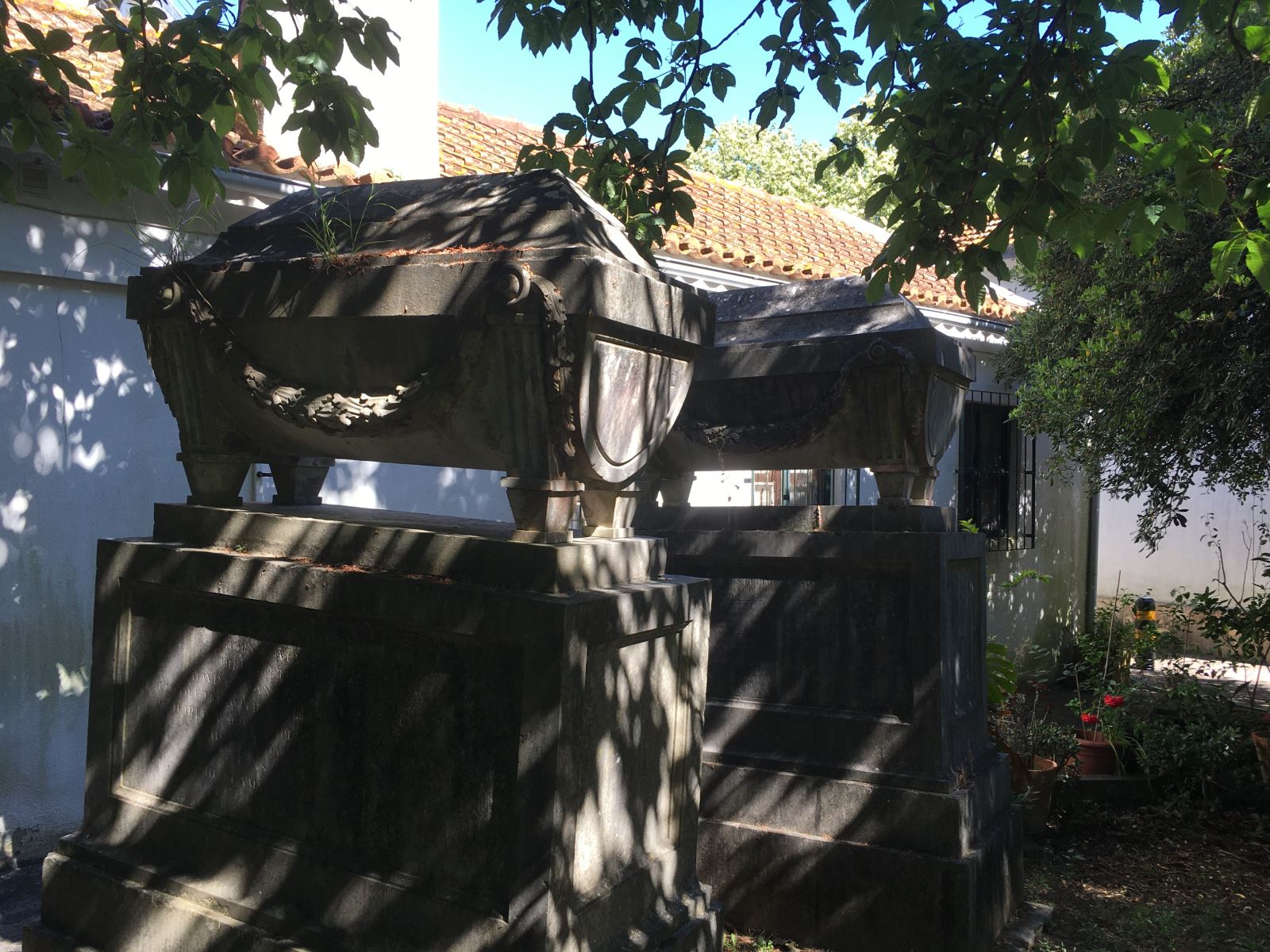 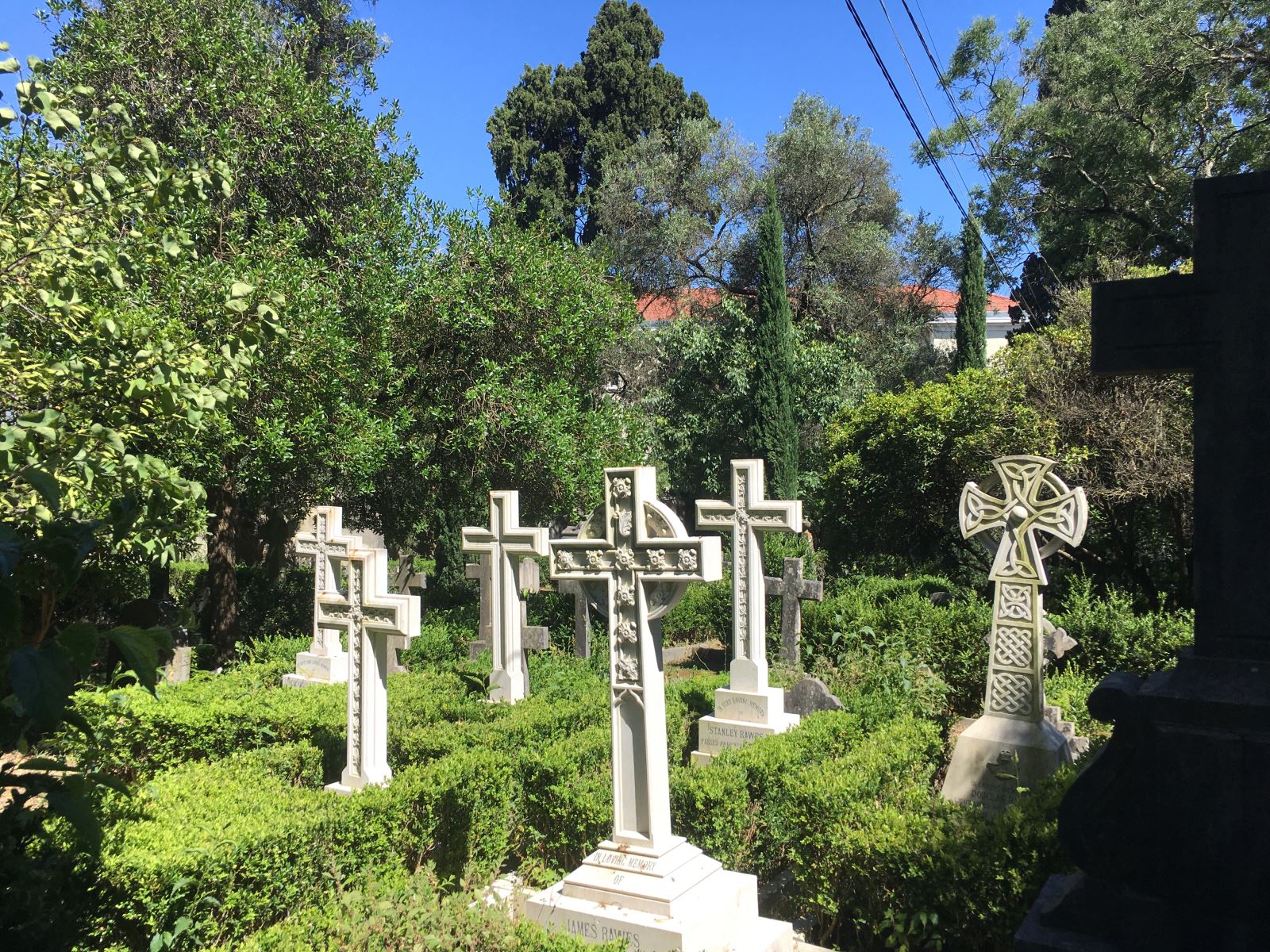 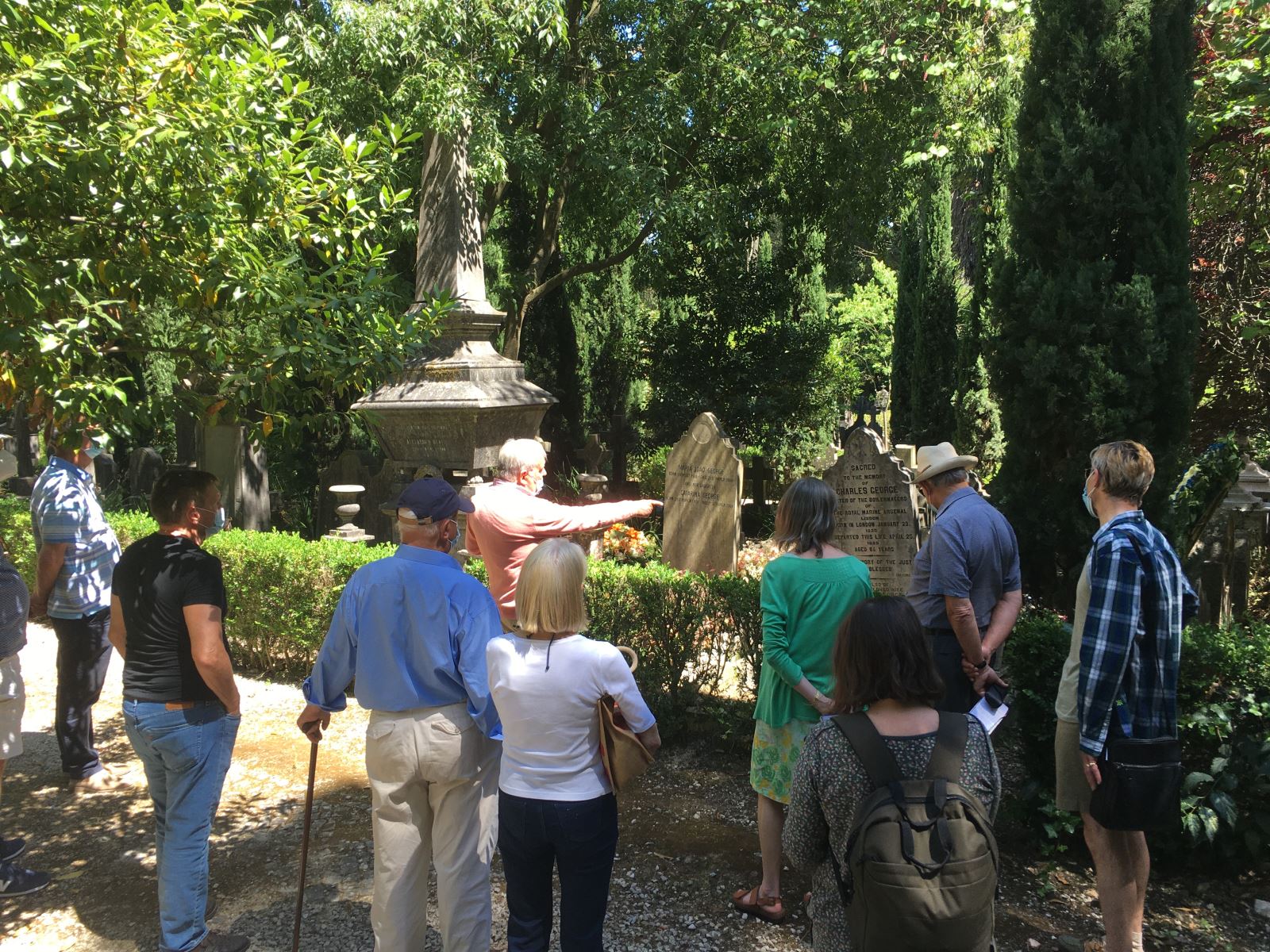 The cemetery was originally intended for the members of the British Factory and their relatives and the British contribution to the Portuguese economy remains well represented. We saw the graves of well-known businessmen and families such as that of William Stephens who founded the glass factory at Marinha Grande; the Rawes family, which dates back in Portugal to 1827; John Stott Howorth who owned the Fábrica de Loiça de Sacavém; the Garland family, which arrived in 1776 and founded a business now operated by the Dawson family; the Rankin family, which became famous in the cork trade; the George family; and the Norton family. There are also the graves of several British consuls, as well as non-British graves such as that of Daniel Gildemeester, the son of the Dutch consul who built the Palácio de Seteais in Sintra; Rudolph Burmester, the German founder of the Burmester Port house in Oporto; Prince Christian August Waldeck, a Prussian General invited by Regent D. João IV to re-organise the Portuguese Army; Charles Louis Christian Rumker, a German astronomer; and David de Pury, a Swiss banker. 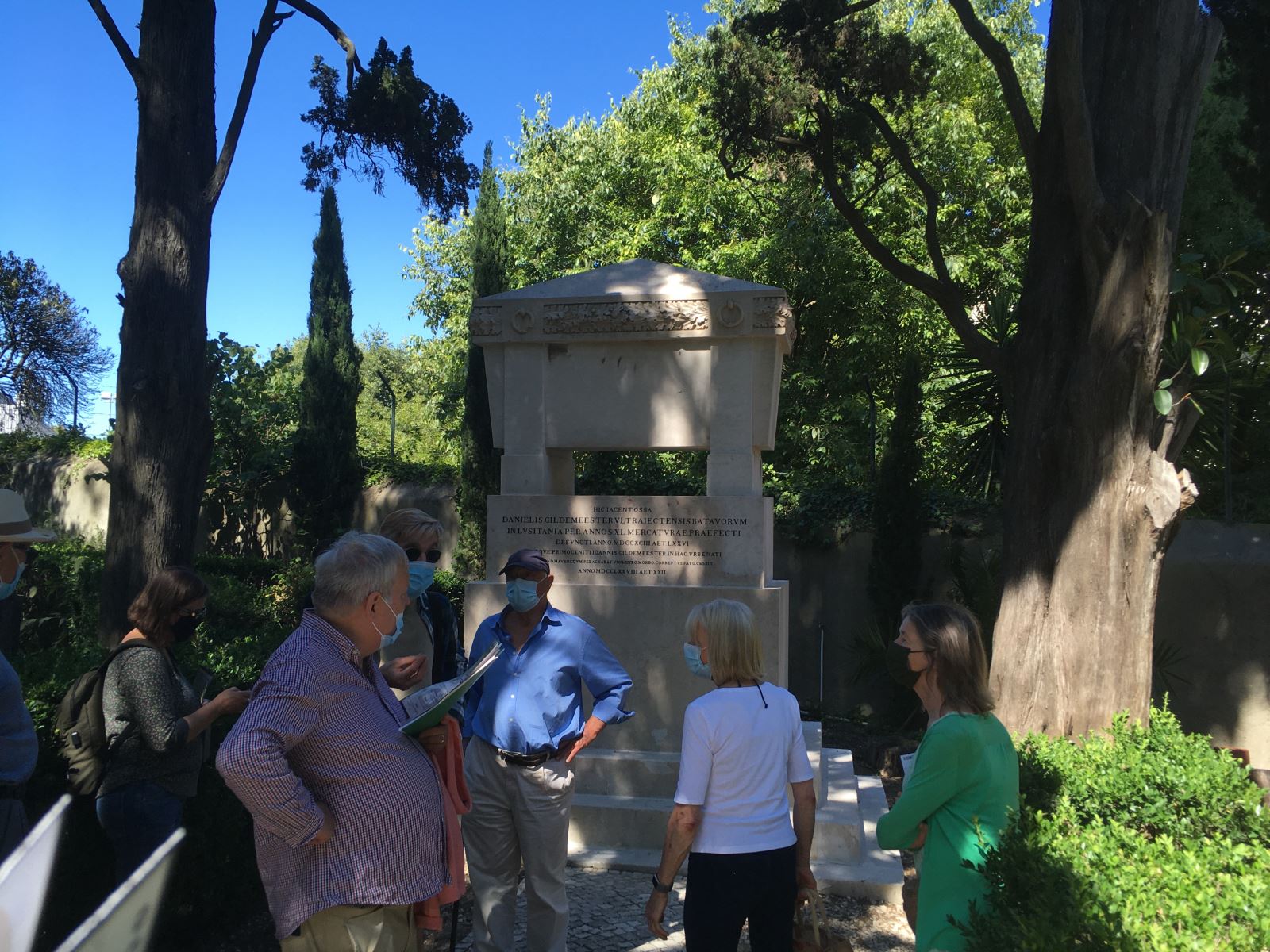 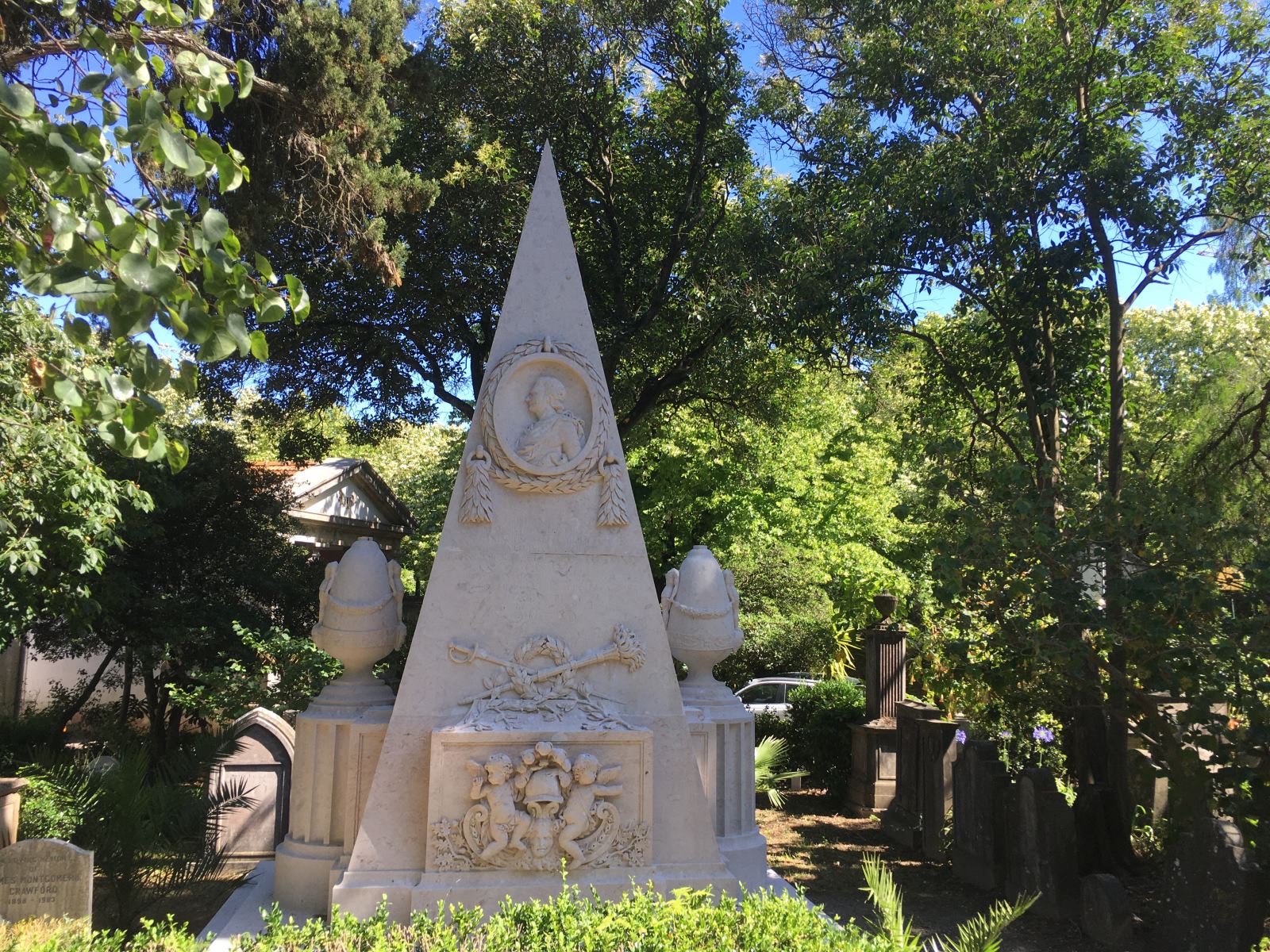 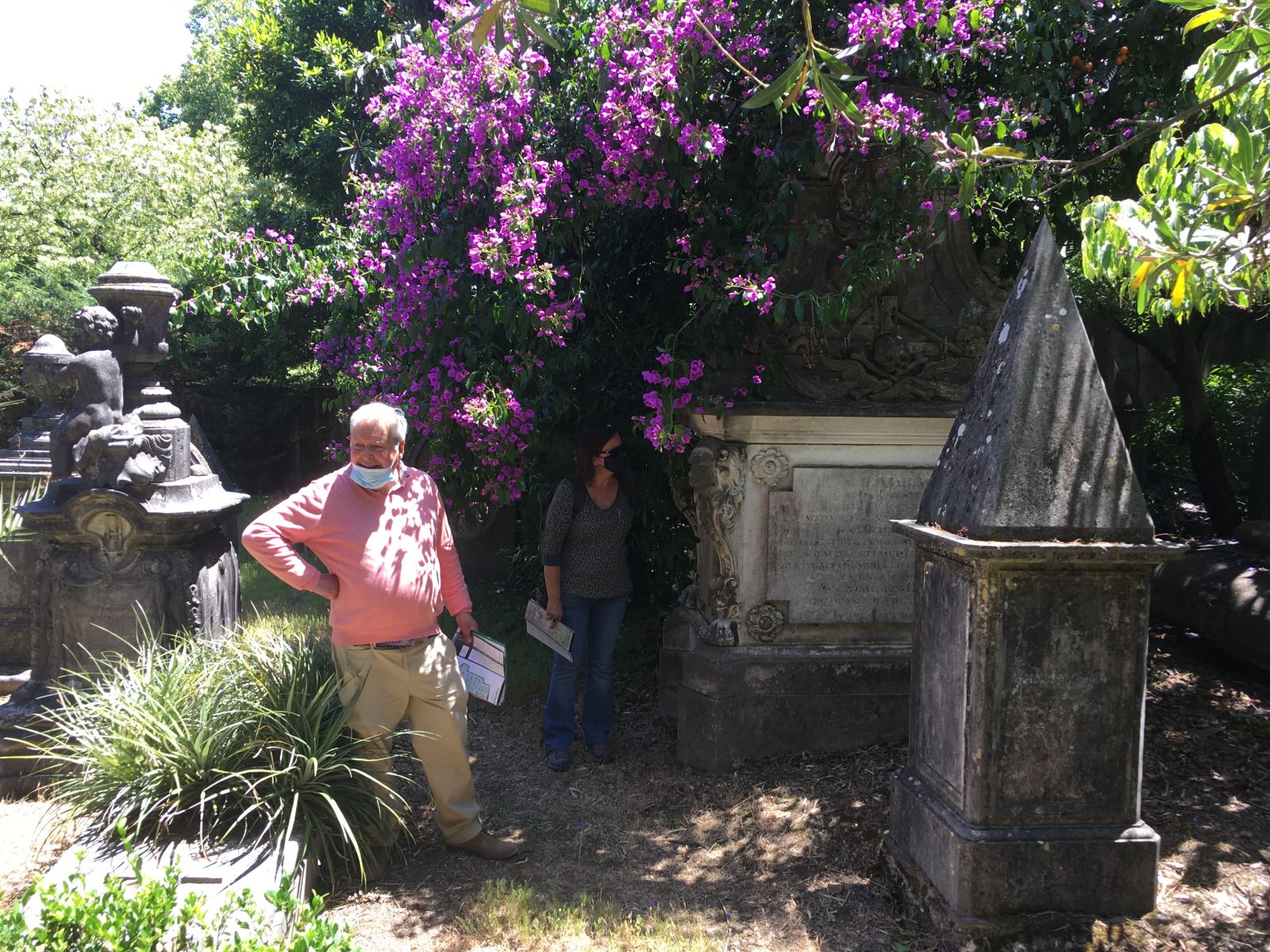 Although Portugal was neutral in World War II, many members of the British armed forces lost their lives in Portugal or its waters. Airmen heading to Gibraltar from Cornwall died when their planes crashed, while ships were torpedoed in Portuguese waters. The Commonwealth War Graves Commission maintains several graves in the cemetery of members of alll three Services, as well those of the Royal Canadian Air Force, the Merchant Navy, and the British Overseas Airways Corporation. 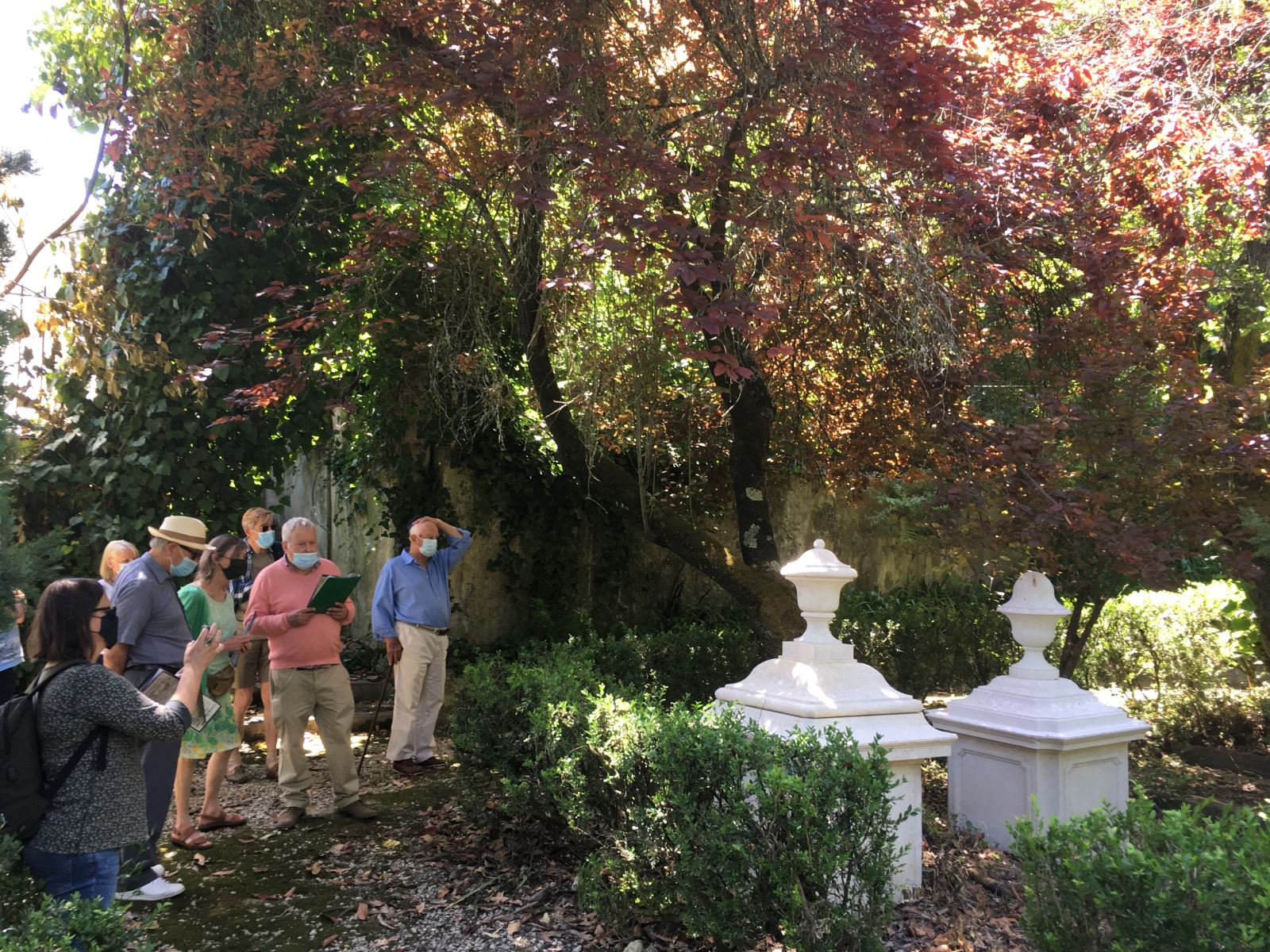 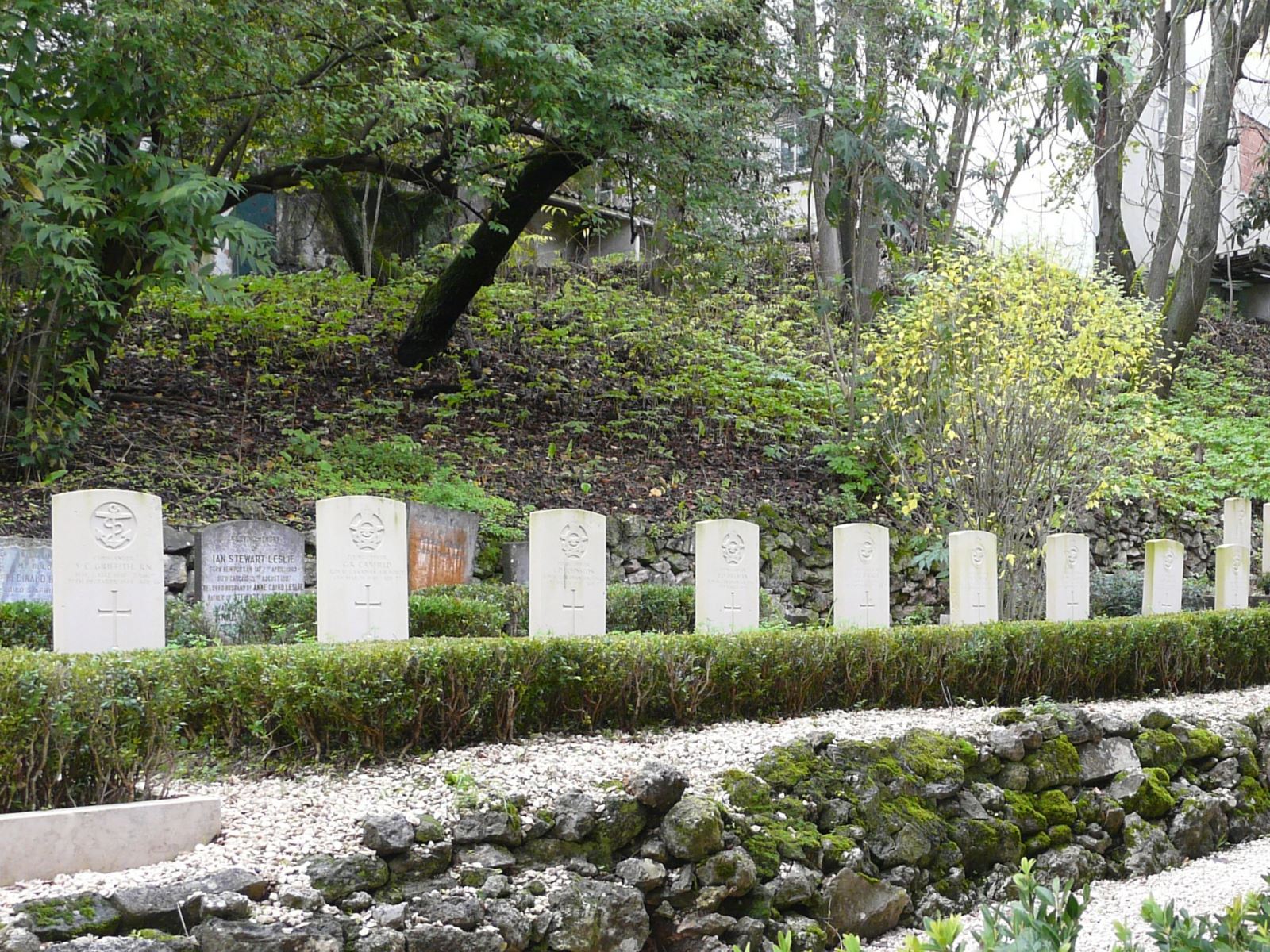 Our tour came to an end with Edward Godfrey giving a brief description of the Jewish cemetery, which is adjacent to the British cemetery but not part of it. We were also able to see the Mortuary Chapel with it's impressive sculptured panel in memory of Thomas Parr. Let's hope that the embryoninc plan to convert this Chapel into a Visitors’ Centre comes to fruition, as the British Cemetery in Lisbon certainly deserves to be more widely known. 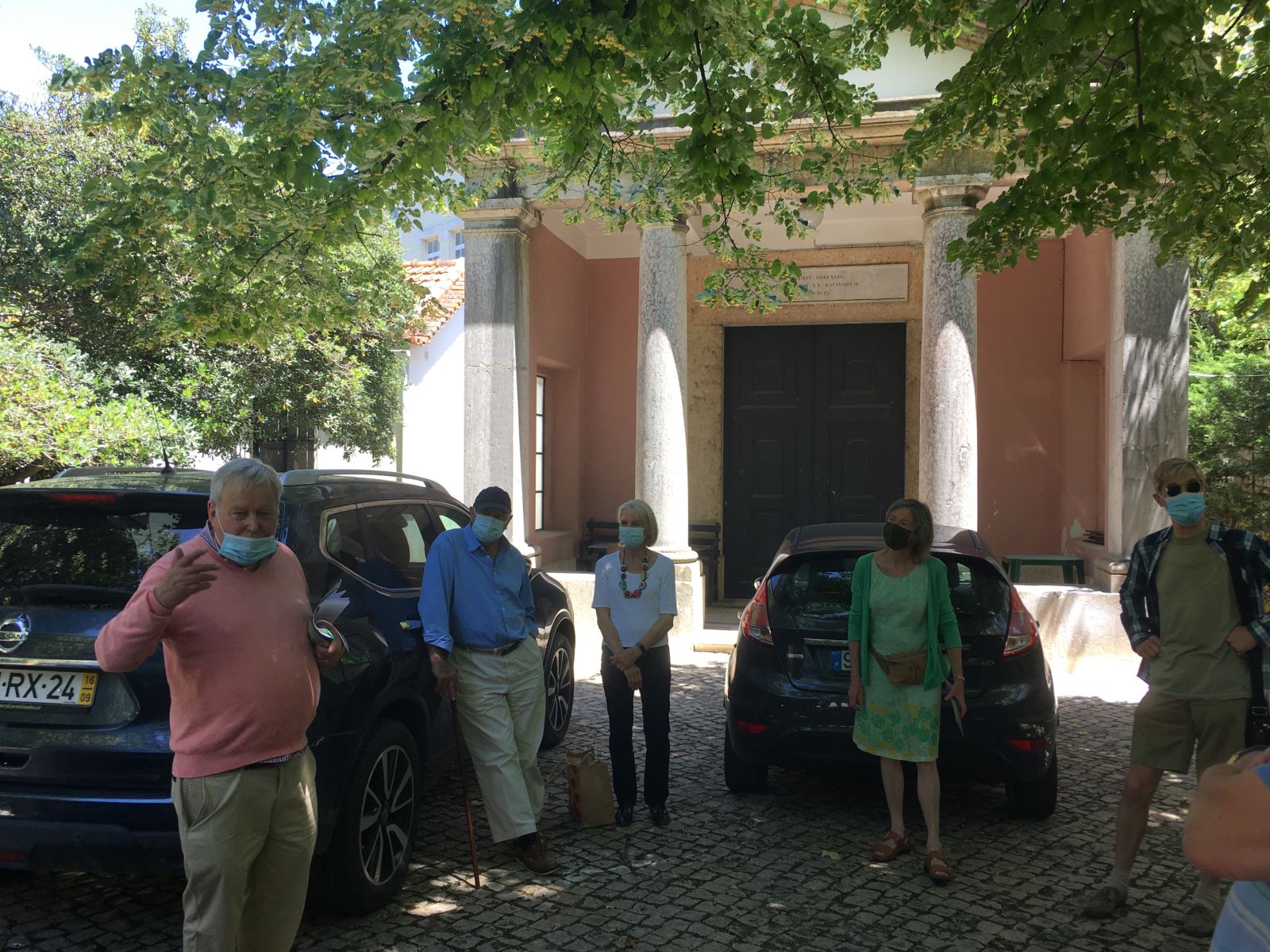 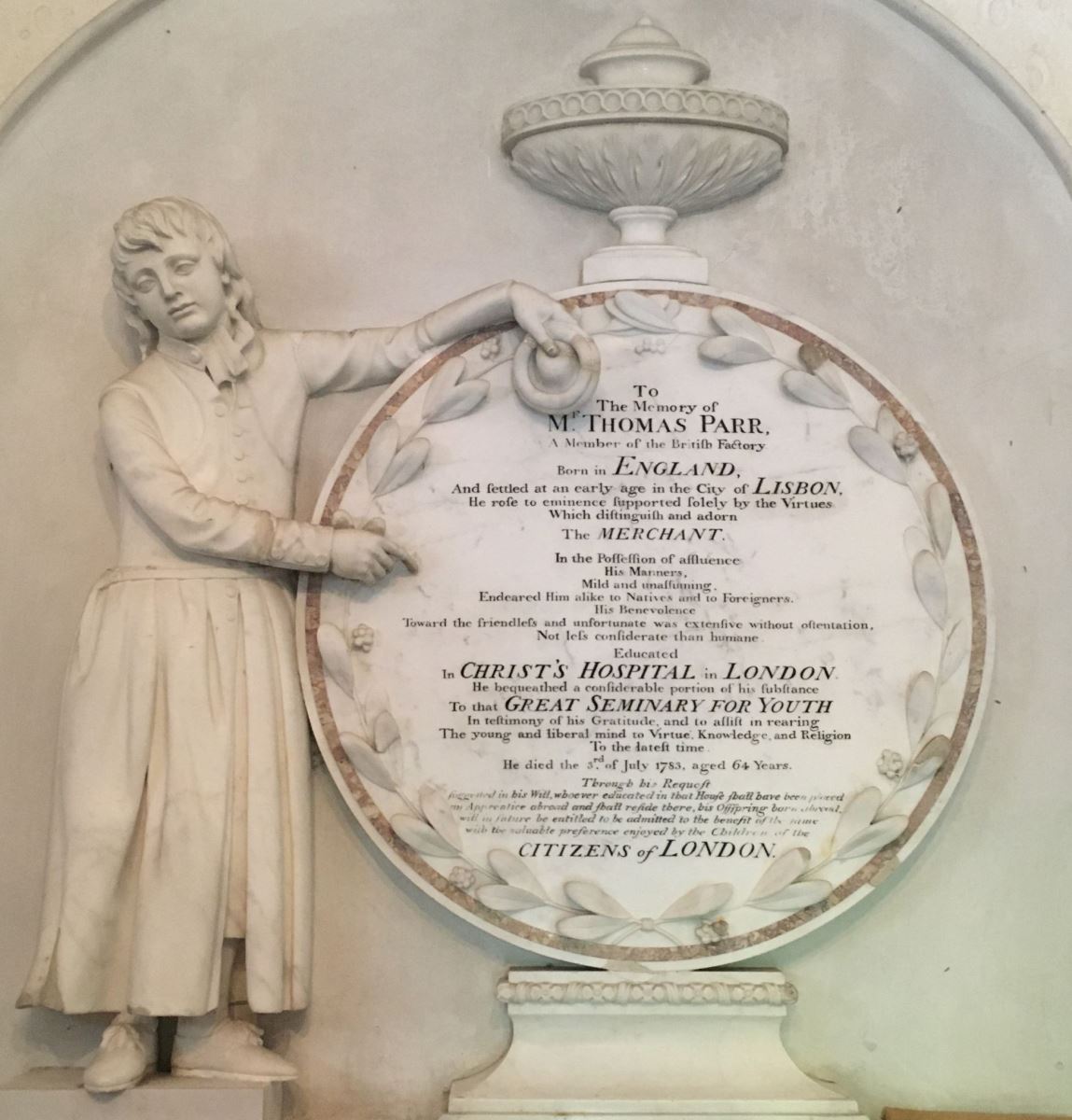 With a round of applause for Edward for his inexhaustible guiding skills, and a contribution to the collection box to help maintain this fascinating reminder of the British presence in Lisbon, we were on our way. But we’ll be back!